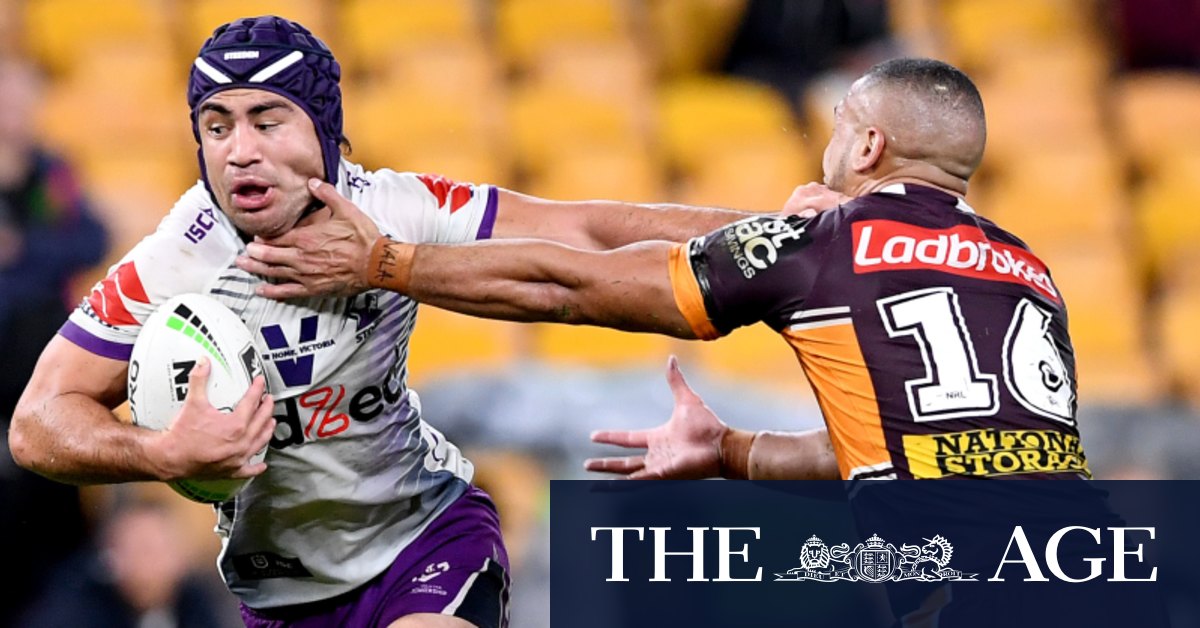 “It was a really good first half and that what makes it really disappointing, that scoreline got away from us in the second half. We were nowhere near good enough in the second half,” said Broncos coach Anthony Seibold, who defended the fitness of his players after another fade out.

“The performance staff tell me we’re fit enough. I’ve been to enough clubs now and know enough about training loads to have a good understanding. The big thing is is pressure… when you have to do so much defence it puts fatigue into you.

“We did fall away at times.”

Melbourne love beating the Broncos in Brisbane at the best of times – they have now won 18 from their past 20 at Suncorp – and were installed as $1.05 favourites to repeat the dose on Friday. Brisbane were $10 rank outsiders with betting agencies; never in the history of the club had they been installed as such rough hopes.

But in the first half, at least, Brisbane finally showed some fight and effort. Their back-line shifts looked more dangerous with Anthony Milford at fullback and Tom Dearden appeared to give some direction in his return to halfback.

Their middles ran with some more venom and at least Payne Haas will sleep well. He ran for 167m and tackled himself to a standstill, all to no avail. But once the Storm returned for the second half, they scored early and the procession began.

Brisbane have learned all sorts of tough lessons this season but Melbourne always play for the 80 minutes and only got stronger as the minutes ticked away. Brisbane, who have been criticised for failing to react to periods of adversity in their matches, began to fade badly and it quickly began to show on the scoreboard.

Brisbane played most of the final 10 minutes with Tevita Pangai Jnr in the sin bin after a silly professional foul when he kicked away a ball that was about to be tapped by Cameron Smith. It was a reflection of the kind of frustration that has dogged the club since the return to play post-COVID.

The Broncos can brace themselves for more pain this week and the pressure on Seibold won’t relent. He had some of his better players back in uniform, including centre Kotoni Staggs, but in the end it didn’t make a dent in one of the best sides in the competition.

For the Storm, it was business as usual and they are right at home in their Queensland hub on the Sunshine Coast. If anything, it will only make them more of a threat as the season continues and they make their customary run towards the top of the ladder.