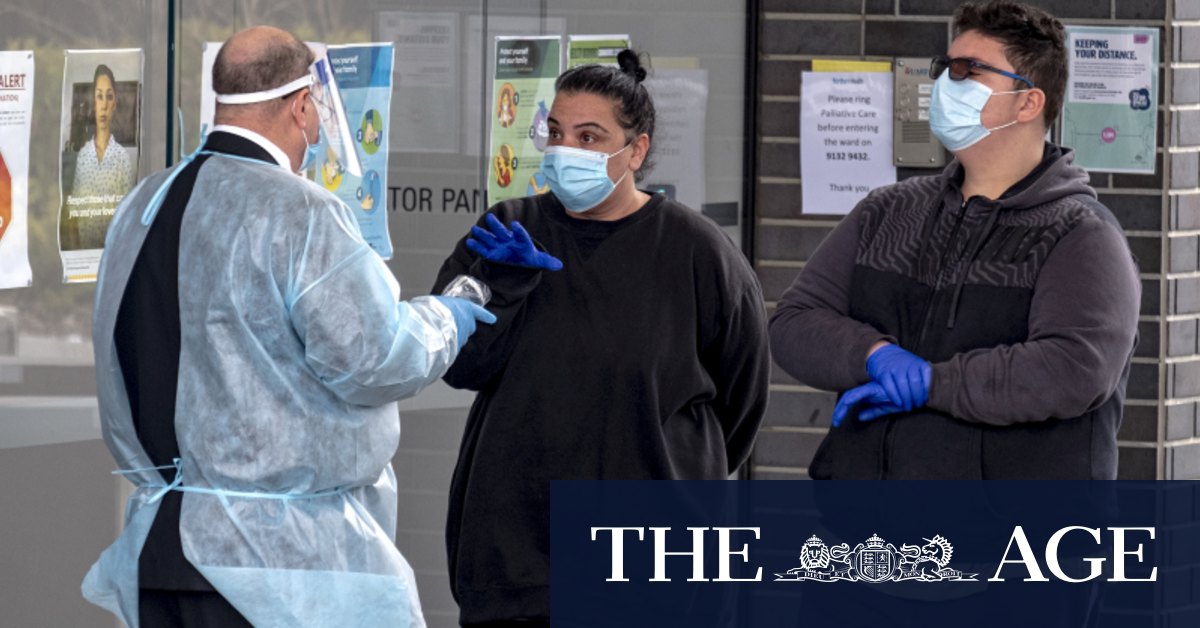 St Basil’s Homes for the Aged in Fawkner in Melbourne’s north was the worst outbreak, with 84 cases among residents and staff.

Late on Monday night, the federal government’s aged care regulator threatened to revoke the licence of the aged care facility.

The Aged Care Quality and Safety Commission has issued St Basil’s with a Notice to Agree, citing concerns about the serious impact of the outbreak on the residents and staff, and the aged care centre’s response.

Under the notice, St Basil’s must not admit any new residents until it can demonstrate to the Commission’s satisfaction that the “serious risk” to care recipients has been effectively addressed.

It must also appoint an independent adviser until St Basil’s is declared free of all positive cases of COVID-19 and is declared safe by the Victorian Government’s Public Health Unit.

Aged Care Quality and Safety Commissioner Janet Anderson said the commission had developed concerns about the serious impact of the outbreak on the residents and staff, and the response of the approved provider.

“These concerns included ongoing challenges apparent in implementing an effective outbreak response in a timely manner, and in fulfilling responsibilities to provide timely communication relating to the care of individual residents,” Ms Anderson said.

St Basil’s said in a statement on Monday night that it had immediately implemented the requirements of the Notice to Agree.

The statement said St Basil’s was pleased to see many of its COVID-19 infected residents at the Fawkner facility were being transferred to hospital.

“We await the test results of our employees and as soon as they are cleared we are eager to return and continue in our mission of caring for our residents.”

Almost as bad at st Basil’s was Epping Gardens, where 77 people have contracted the virus.

Luci Larubina’s 85-year-old mother, Elsa, is in the home and has twice tested negative to coronavirus.

But Ms Larubina is furious over the lack of communication, saying she had been unable to get any real information on her mother for days.

“I have been trying to ring them from Friday night, and they don’t pick up their phones,” she said.

Her mother has dementia, and moved into Epping Gardens Aged Care home just two weeks ago – when there were no positive coronavirus cases.

Two cases were identified last week, and the virus has since raged through the centre.

On Monday, after news of the rapid spread, Ms Larubina said she had had enough of waiting on the phone.

“I bolted down there to see what’s going on,” she said after managing to get some information about her mother.

The federal opposition released new figures on Monday from one of the first aged care outbreaks during the pandemic, western Sydney’s Newmarch House where 19 residents died.

Julie Collins, the federal opposition’s spokeswoman on aged care, said there were clear parallels between the lack of communication with families at Newmarch House in Sydney in April and what was unfolding in Melbourne.

Figures obtained from a Senate select committee on COVID-19 show the federal government provided only one social worker to work with families, some of whom did not learn of their relative’s death until days later.

Ms Collins said the federal government “must now step up and ensure the families … are provided with timely and correct advice about the status of outbreaks”.

Federal Aged Care Minister Richard Colbeck said the outbreaks in Victoria were “extremely concerning”, and that the situation inside homes where there were multiple cases was complex.”

He pointed to the Morrison government’s establishment of a Victorian Aged Care Response Centre, which will co-ordinate and expand resources to tackle the virus in homes.

The centre will bring together Commonwealth and state agencies at Victoria’s State Control Centre, he said.

“A highly experienced crisis communication team, supported by clinical staff, has commenced at St Basil’s to ensure that there is daily communication with every family specifically about their loved one,” he also said.

“That gives the older person the best chance of survival and the best care, while allowing us to … protect what might be another 100 or more people living in the same space,” said Patricia Sparrow, the group’s chief executive.

Ms Sparrow said the vulnerability of residents in homes was so serious that unless immense resources were thrown into stopping outbreaks, “once it gets into aged care it can be disastrous – the scale of this is now so broad”.

Victoria’s Chief Health Officer, Brett Sutton, said on Monday that elderly residents who contracted coronavirus were at “significant risk of dying – where there are outbreaks in aged care the mortality rate is extremely high. We know that from European outbreaks in particular, where deaths in aged care made up almost half of all deaths.”

Professor Sutton offered one glimmer of hope, saying the government’s modelling indicated that Monday should be the peak of the state’s second wave.

“Modelling, with our effective reproduction number that I have seen most recently, suggests that today should be the peak,” he said.

“There is a real concern that this virus is getting through aged care in Victoria – that the measures that are being put in place are either not enough or have come too late,” he said.

“We can’t have a situation where people in aged care are left without showers for days and days on end. We need to make sure these people are looked after with dignity.”