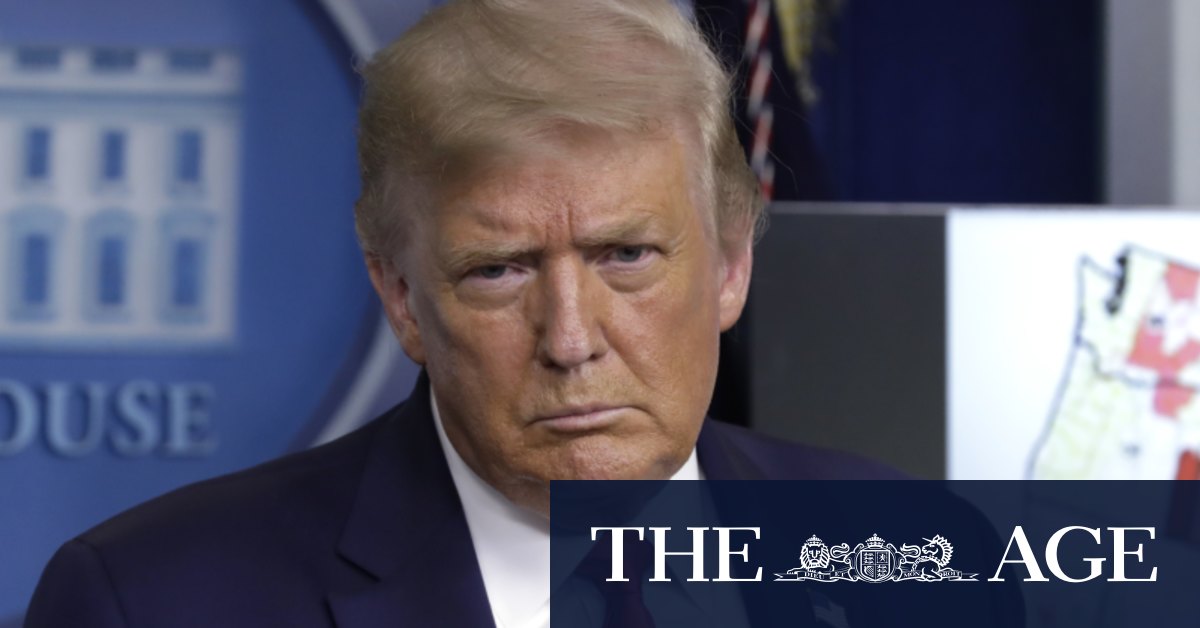 Trump’s tweet came on a day of bad economic news and amid a dark political patch for his re-election effort.

The government reported on Thursday that the US economy shrank at a dizzying 32.9 per cent annual rate in the April-June quarter, by far the worst quarterly plunge ever, as the coronavirus outbreak shut down businesses, threw tens of millions out of work and sent unemployment surging to 14.7 per cent.

And Trump trails in the polls, nationally and across battleground states, and some surveys even suggest traditionally Republican-leaning states could be in play. While Trump has come back before after trailing consistently in the polls throughout 2016, it’s raised the possibility that he could face a landslide loss if he doesn’t turn things around.

There is no evidence of widespread voter fraud through mail-in voting, even in states with all-mail votes.

Five states already rely exclusively on mail-in ballots, and they say they have necessary safeguards in place to ensure that a hostile foreign actor doesn’t disrupt the vote. Election security experts say that all forms of voter fraud are rare, including absentee balloting.

Multiple conservative US politicians pushed back against Trump’s suggestion, saying the contest would be held as planned even as they backed his concerns about mail-in voting.

US Representative Rodney Davis, the top Republican on the US House Administration Committee, tweeted that there would “be no delay”.

Trump has increasingly sought to cast doubt on November’s election and the expected surge in mail-in and absentee voting as a result of the coronavirus pandemic. And Trump has called remote voting options the “biggest risk” to his re-election. His campaign and the Republican Party have sued to combat the practice, which was once a significant advantage for Republicans.

Trump refused in an interview just weeks ago with Fox News to commit to accept the results of the upcoming White House election, recalling a similar threat he made weeks before the 2016 vote.

“I have to see. Look … I have to see,” Trump told moderator Chris Wallace during a wide-ranging interview on Fox News Sunday.

Last month, Trump told supporters in Arizona that “this will be, in my opinion, the most corrupt election in the history of our country”.

There appears to be next-to-no appetite in the Capitol for a change to the November 3 election. Democrats have pushed to includes billions of dollars in the next coronavirus relief bill to fund election security and accessibility improvements for this year’s vote, but Trump and Republicans have so far resisted those efforts.

Just months ago, in April, Trump had ruled out the prospect of trying to change the election date. “I never even thought of changing the date of the election,” he said. “Why would I do that? November 3rd. It’s a good number. No, I look forward to that election.”

Attorney General William Barr, speaking to a House committee earlier this week, claimed there was “a high risk” that mail-in voting would lead to “massive” fraud. He said he had no “reason to think” the upcoming election would be rigged. But he said he believed “if you have wholesale mail-in voting, it substantially increases the risk of fraud”.

Representative Cedric Richmond, a Democrat, asked Barr at the hearing whether a sitting US president could move the election date. Barr responded: “Actually, I haven’t looked into that question under the Constitution.”