Saints solidify spot in top four with win over Swans 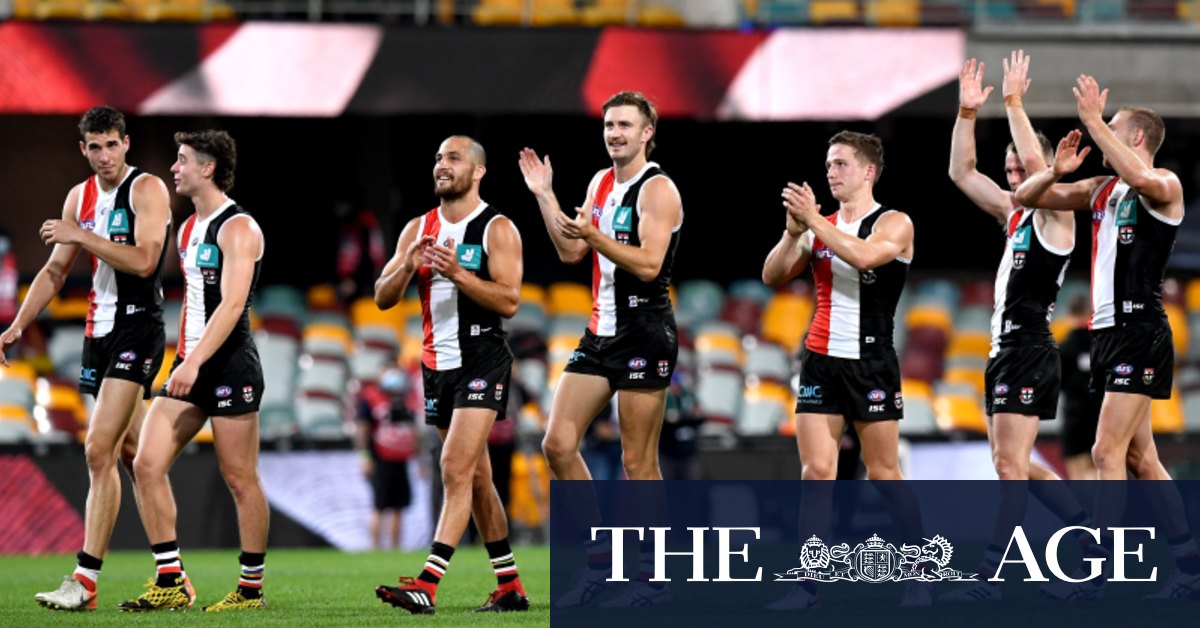 After sweeping through the Adelaide clubs in back-to-back road trips to South Australia, the Saints survived a third-quarter press from the Swans to then thrive spectacularly in the fourth term and solidify their place in the top four.

After the wobbles of the third quarter, the Saints steadied through Dan Butler and Max King with the electric Nick Hind adding his third goal of the day to put the Swans away. A Jarryn Geary snap was the icing on top and it was party tricks after that.

The Saints had stars all over the park with Jack Steele (24 disposals, eight inside 50s), Jade Gresham (two goals, 23 disposals, six clearances), Zak Jones (14 contested possessions), Jack Billings (19 disposals) and Hind all to the fore.

Former Swan Jones converted a set shot after half-time to spark a minor scuffle, after he had been in a number of skirmishes with ex-comrades all night.

During the push and shove, Saint Jake Carlisle appeared to target the broken hand of Sydney’s Dane Rampe, with a number of Swans players remonstrating with the St Kilda defender.

Sydney then camped themselves inside their attacking half of the ground – they enjoyed a 15-7 inside 50 win for the third term – with Callum Sinclair and Tom McCartin the goalkickers to reduce the margin to 14 points.

But Hind’s goal against the run of play was a timely circuit breaker and allowed the Saints to take a 20-point buffer into the last change.

After losing Seb Ross to a calf niggle before the game, the Saints led by 22 points at half-time after booting the first four goals of the term through Josh Battle, Grisham, King and Butler.

The Swans enjoyed the better of the territory battle in the second term but could only register six behinds, with St Kilda scoring on sweeping counter-attacks.

An Oliver Florent goal right on the half-time siren allowed the Swans to be closer than they deserved as the Saints were well in control of the contest, with their backline holding form, their ruck duo firing and their forwards seizing opportunities.

St Kilda enjoyed an eight-point advantage at the first break with Gresham, Hind and Hunter Clark hitting the scoreboard, with Sydney’s only joy coming through Tom Papley and McCartin off the back of a dubious 50-metre penalty.

St Kilda had more inside 50s, clearances and disposals but still had 10 more tackles than the Swans to point to the Saints’ greater intent.

Papley spoke to Fox Footy pre-match when he revealed that a close friend passed away suddenly this week. When he kicked truly for the match’s opening goal, he touched the black arm band and pointed to the sky.

“To anyone out there, if you’re feeling down, put your hand up, people are out there to help,” Papley said, fighting back tears.

St Kilda’s one-two ruck combination of Rowan Marshall and Paddy Ryder is causing problems for opposition sides. They went quiet in the third quarter (and they were not alone) but their tap work, ground level skills and ability to be a threat when resting up in the forward line is a weapon.

Coaches hate it when rivals score from stoppages close to goal. Hate it. Swans senior coach John Longmire’s head almost exploded when the Saints piled on two goals in quick succession, when they found space around the stoppage while deep in attack. Very un-Swans like. Old Bloods would have been boiling.