The unfashionable forward who’s a key to Magpies’ 2020 hopes

admin August 1, 2020 AFL Comments Off on The unfashionable forward who’s a key to Magpies’ 2020 hopes 55 Views 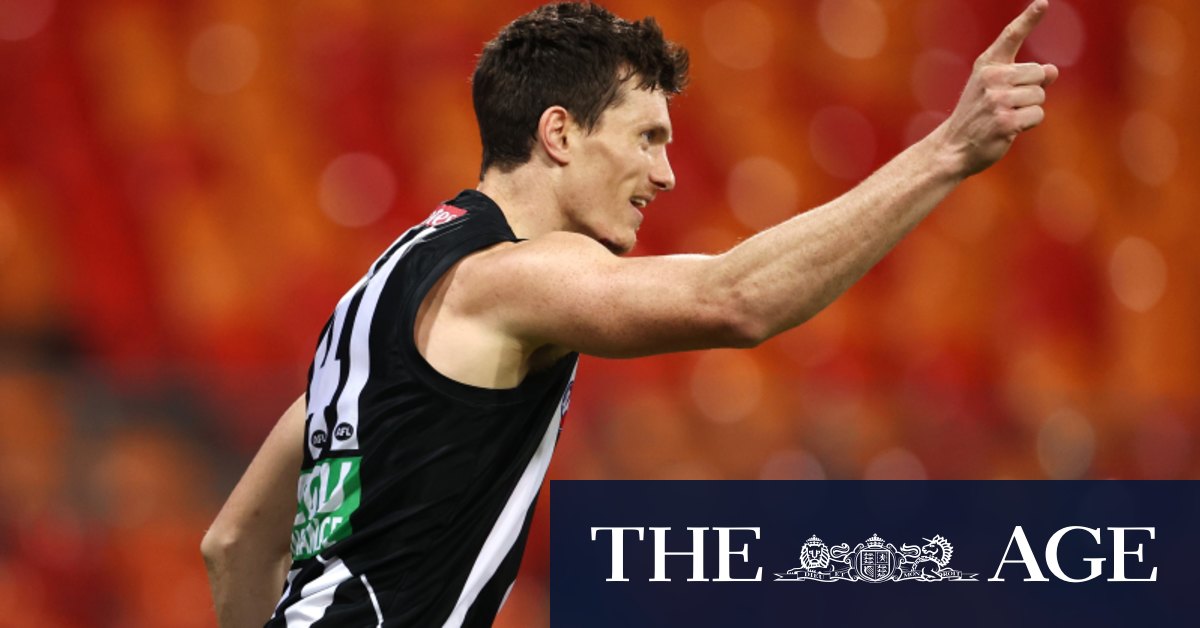 Maribyrnong Park to Werribee to Port Melbourne to the Magpies was the well-documented path Mihocek took before finding himself making his debut in an unfamiliar role inside 50 at the MCG a little more than two years ago.

An unlikely key forward, given that he was recruited as a rookie on the back of being a VFL premiership defender with the Borough, he played a key role alongside Mason Cox in taking the Magpies to within five points of a premiership in his first season.

He has become a staple up forward reeling off 48 consecutive games since his debut, snagging 36 goals in 2019 and finishing ninth in the best and fairest to cement his spot, before surprising everyone, including himself when he led the Coleman Medal after six rounds in 2020.

“That did make me feel good,” Mihocek admits.

Now he enters the festival of footy as an old reliable on the bill, no longer leading the Coleman but still an unfashionable forward playing uncomplicated riffs who has happily handed in his membership of the defender’s union.

“I don’t think I could go back as I have just lost all sense of being a defender now and I am loving it,” Mihocek said.

Another defensive turncoat in premiership Magpie Ben Reid has helped Mihocek develop his forward craft with most of his output resting on a work rate that allows him to reach aerial contests regularly with his inherited competitiveness making it hard for opponents to outmark him.

“Playing forward is definitely tougher, with a lot more running and you don’t get used as much,” Mihocek said. “If you are a defender you can get cheap little kicks, which is nice to get your confidence up. You definitely have to work for your possessions as a forward and it is a lot more rewarding.”

And work is what he does, putting on the overalls to bring the ball to ground for Collingwood’s runners to swoop.

This season, however, the goals aren’t as easy to find as they were in 2018, a year in which six Magpies kicked 25 goals or more and Mihocek suggests the shorter quarters have removed the defensive lapses that once arrived through fatigue.

Mihocek is not worried. He knows nothing comes easily in football, least of all goals.

Even during his remarkable unbroken run of matches (helped when the season was postponed after he suffered a punctured lung in round one) the pressure has risen, with both expectation and the unyielding need to adapt always present.

“It’s still a difficult environment out there,” Mihocek admits, now the mainstay in a forward line that has lost Jordan De Goey to injury and Cox to poor form.

That presents a challenge and an opportunity for a Magpie who has shown his capacity to take every one that has arisen so far.

“I know I am not going to be able to do it all by myself and neither is any other person in the forward line,” Mihocek said.

Mihocek is making a name for himself as Jack proudly watches on.

“We’re always chatting after games. He picks up things most things wouldn’t and we have a chat about that,” Mihocek said.

Closing in on finishing his third season as a rookie for the Magpies, out-of-contract forward Mihocek has used any uncertainty he faces about his future as motivation to keep performing.

With the contract freeze lifted last week, the valuable 27-year-old who won Collingwood’s goalkicking last season is yet to enter serious discussions with the Magpies but he is clearly a wanted player beyond this season.

However he has adopted a hungry mindset that means he doesn’t take anything for granted.

“I haven’t thought about it much,” Mihocek said. “Knowing that I don’t have a contract, I want to work hard to prove my worth.

“It is probably a good thing knowing you have not got that safety [net] as yet and you have to do everything you can to show what you are made of.”

AFL defends itself in wake of Grimes’ ‘cover up’ allegations