Demons get the devil off their back over winless Crows

admin August 5, 2020 AFL Comments Off on Demons get the devil off their back over winless Crows 18 Views 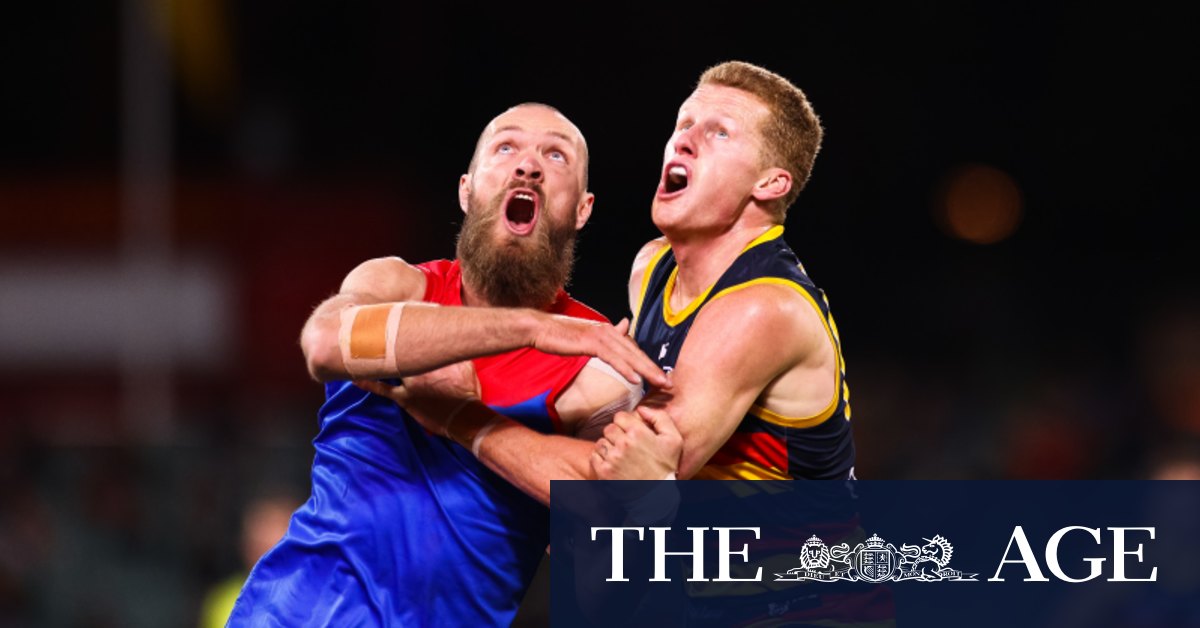 Demons coach Simon Goodwin will be only slightly more relieved than his chairman Glen Bartlett who now does not have to follow through on his unspecified threats of repercussions.

Melbourne began with the eager sense of purpose and urgency to atone that would be hoped of a side that had offered so little last week and was castigated so much for it. They harried the ball and hurried to get the win over and done with. Jack Viney led them in this early fray.

That early ownership of territory and possession did not translate sufficiently on the scoreboard and Adelaide managed to hang in the contest in what proved a theme of the night. Well for three quarters at least.

The Demons opened the game up in the fourth-quarter and Adelaide’s will withered against the inevitability of loss. The Crows kicked one goal for the second half.

Melbourne this week was not insipid nor soft as butter such as Bartlett lambasted them last week, but they responded with early shows of aggression that felt forced.

They were also costly, such as Neale-Bullen’s sling tackle that could see him suspended, and Aaron Vandenberg’s shove in Fischer McAsey’s back that saw a free kick reversed and a certain goal lost.

Clayton Oliver was emblematic of Melbourne’s miserable day last week with some horrible turnover kicks but he was best on ground against the Crows. Counter-intuitively he played with greater freedom due to the pressure rather than being burdened by the focus.

Oliver burst from packs with acceleration rather than giving the ball off quickly by hand at first opportunity. Ironically it was Oliver, the player whose kicking was most doubtful last week, who was the player to take the set shot in the last quarter that assured Melbourne of their win.

Melbourne was structurally sound, squeezing Adelaide to the boundary and forcing them long down the line which fed Steven May in particular who was again very good for the Demons.

Max Gawn still looked sore and there will must be a query over how he is handled now in this condensed season within a season. Reilly O’Brien was good for the Crows in work to exploit his more limited mobility.

Angus Brayshaw and Christian Petracca struggled to find the ball in the first half but worked their way into it with Petracca being involved in many of the Demons scores.

The Crows made a heavy nine changes – among them Bryce Gibbs whom they pointedly said was dropped and not managed – half an on-field team. The effect was that while this was a team reintroducing themselves to one another on the ground, it was a team that had an instruction that Melbourne feared losing more than them.

They were good in contests for most of the night but had no forward line. When they got the ball forward it was long along the line to bounce off Taylor Walker’s hands.

Possibly the most critical play of the night came in the third-quarter when Adelaide finally broke from half-back and sniffed a rare opportunity to run through the middle. Three Crows ran sieving from half-back with the field open to them ahead if they just 1-2 handball past Steven May.

The Demons full-back scooped an arm around Rory Laird and stopped the run in its tracks. His kick set up Fritsch who then gave off to Harley Bennell to curl in a goal. The margin was only 13 points but in the context of momentum it was crucial.

Alex Neale-Bullen was one of Melbourne’s inclusions but he can expect to have a rest again after a sling tackle on Will Hamill will likely be suspended.

He had Hamill by one arm and pivoted to sling him into the ground slamming his head in the process. The young Crows player was dazed and he went straight from the ground and did not return after the first-quarter incident due to concussion.