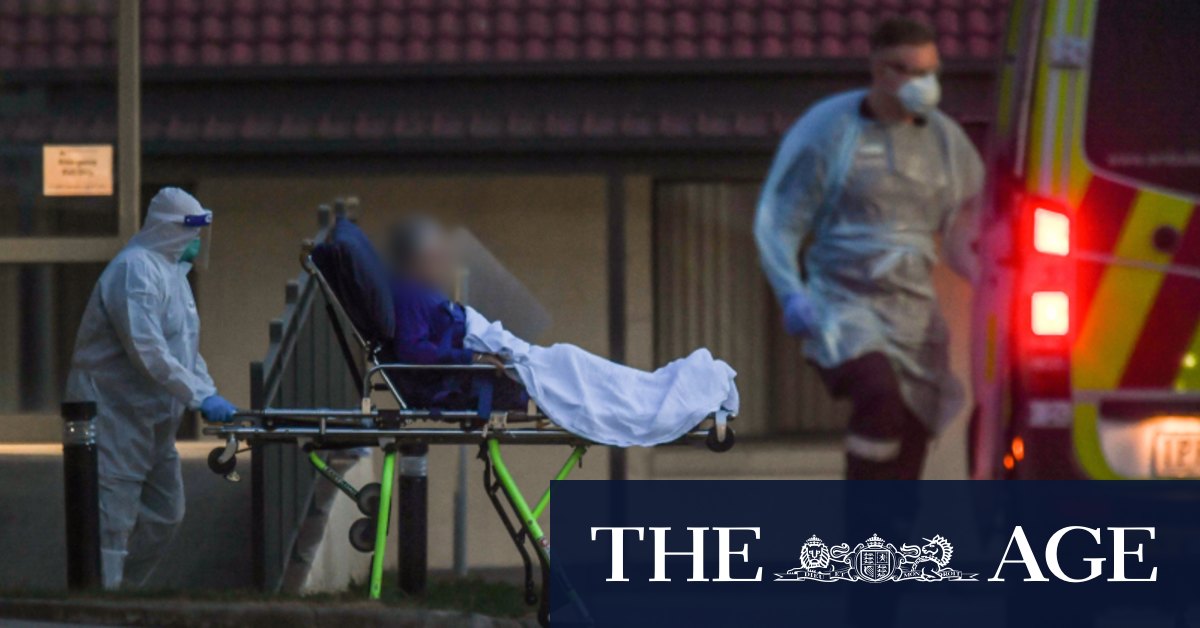 “We have got a repatriation plan and that is being processed,” he said. “We are under pressure to start taking people back from the weekend if we can.”

The Aged Care Quality and Safety Commission, meanwhile, took action against the owners of another aged care facility at the centre of a COVID-19 outbreak.

It ordered the Rosehill Aged Care Facility in Highett – due to an “immediate and severe risk to the health, safety or wellbeing of aged care recipients” – to appoint an independent adviser to oversee its operations. Under a formal notice issued late on Wednesday, the Highett nursing home run by Menarock Aged Care Services will be stripped of its Commonwealth subsidy if it fails to comply with the order.

There are 23 confirmed cases linked to Rosehill, including 19 elderly residents.

The St Basil’s facility owned and managed by the Greek Orthodox Church has been linked to 159 COVID-19 cases and at least 20 deaths. There are currently 1435 active cases linked to aged care, and more than 300 aged care residents have been transferred to public and private hospitals.

A spokesman for Federal Minister for Aged Care Richard Colbeck said the repatriation plan for St Basil’s was conditional on the centre meeting certain standards.

“The approved provider needs to demonstrate that the service has had a deep clean prior to any residents returning, the adequacy of the returning workforce and that any returning staff have received appropriate training in infection control practices including PPE use,” he said.

St Basil’s was placed in the hands of a replacement staff on July 22 after Victorian Chief Health Officer Brett Sutton directed the facility’s entire management and staff into quarantine to contain a COVID-19 outbreak. The centre was closed last Friday after all remaining residents were transferred to hospital.

A total of 538 Victorians with the virus were in hospital on Wednesday, including 42 in intensive care. The decision to return some residents to St Basil’s will relieve the pressure placed on Melbourne’s hospitals when they accepted the transfer of aged care residents from coronavirus outbreak sites.

Victoria’s Deputy Chief Health Officer Allen Cheng, when questioned on Wednesday about the capacity of hospitals to absorb more aged care residents, said: “Everything has a limit.”

Professor Cheng added: “It is not the preferred option. When there is an outbreak in aged care there is an assessment that is made about what is possible, what is the configuration of the aged care, what does infection control look like, what is the staffing like and what is the clinical need of the residents.”

While 12 of the 15 deaths recorded on Wednesday were linked to aged care, Premier Daniel Andrews said the situation had stabilised at aged care facilities.

“A number of those settings that were in crisis, they have stabilised. In fact, I think all of them could now be described as stable,” he said.

Mr Andrews sought to clarify childcare arrangements during the six-week lockdown, which will leave most families without access to early education, announcing a new permit system for childcare.

The Department of Justice website crashed due to demand from Victorians trying to access applications for a separate worker permit that will enable them to lawfully travel between home and work.

From midnight on Wednesday, Melbourne workplaces must close unless they are part of a permitted activity, or all staff are working from home.

The government tightened restrictions in regional Victoria, with all elective surgeries put on hold, apart from category one patients and the most urgent in category two, to free up capacity for coronavirus patients.

“The sickest patients must get treated quickest,” Mr Andrews said.

In Greater Geelong, the number of active cases increased by 12 to 132 on Wednesday. Australian Defence Force personnel arrived in Geelong this week to provide logistics support and nursing at the Opal South Valley aged care home, where one person has died.

Barwon Health has taken over infection control at the home and introduced new measures to control the spread of the virus.

Barwon Health infectious disease director Eugene Athan said extensive testing was being carried out at the home. So far 24 residents and about six staff have tested positive.

“We have split the facility into clean and contaminated areas. That seems to have worked quite well in the past 24 hours.”

Authorities are also working to contain an outbreak at the Golden Farms chicken abattoir in the Geelong suburb Breakwater.

COVID-19 restrictions are also keeping police busy, with officers issuing 155 fines in 24 hours, including 36 to people caught leaving home without wearing a face covering, five to people at vehicle checkpoints and 25 to those breaching the curfew.

Officers continue to encounter violence as they enforce the new rules, with an officer injured at a checkpoint on the Maroondah Highway in Coldstream and two others threatened with serious injury in Geelong.

Meanwhile, in an effort to avoid a second wave of coronavirus, Queensland will close its borders to NSW and the ACT from 1am on August 8. And NSW Premier Gladys Berejiklian has announced that Victorians travelling to her state will be required to spend 14 days in hotel quarantine.

Education Editor at The Age