When will Victoria’s daily coronavirus numbers start to come down?

admin August 5, 2020 Victoria News Comments Off on When will Victoria’s daily coronavirus numbers start to come down? 52 Views 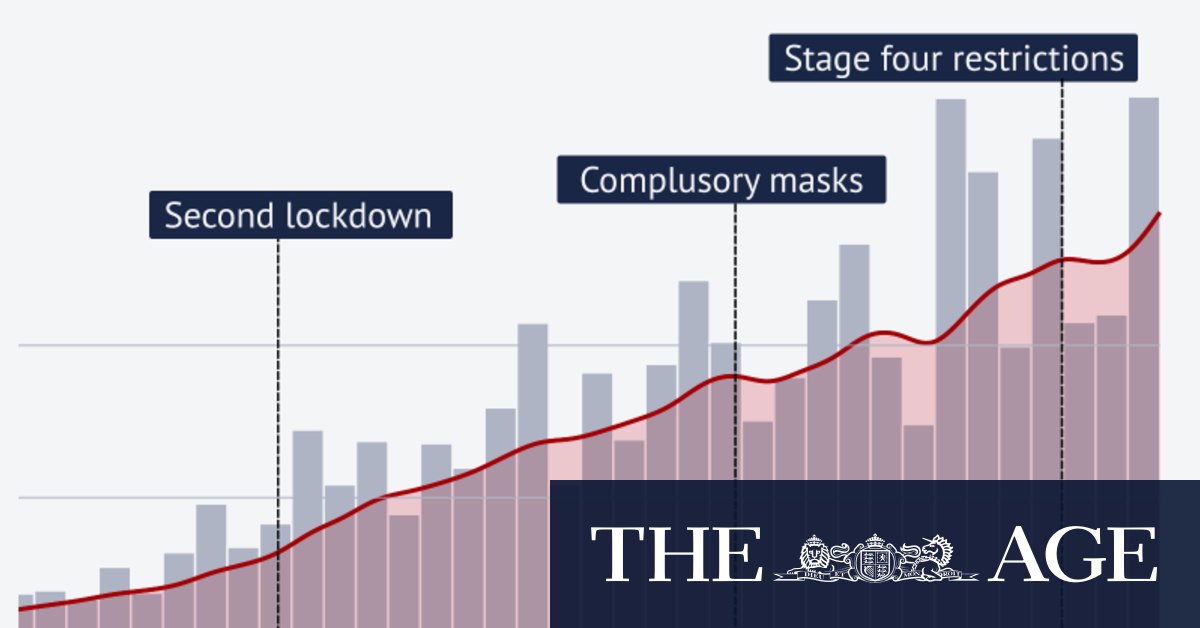 For a start, Deakin University epidemiology chair Catherine Bennett said a large number of the 725 new cases on Wednesday were from known outbreaks in aged care centres.

“A lot of the effort over the past few weeks has been suppressing community transmission so that we don’t see big new outbreaks. That is hopefully happening but we won’t see it while we still see outbreaks that have been in train for a number of weeks still causing new cases,” she said.

At the Wednesday coronavirus update, Premier Daniel Andrews noted the number of active coronavirus cases linked with aged care homes (both in staff and residents) had reached a total of 1435, which is a rise of 249 in a single day.

It is unclear how much of this rise in active cases comes from the new numbers reported on Wednesday and how much would have been linking people who tested positive on previous days in aged care settings.

Later in the press conference, Deputy Chief Health Officer Allen Cheng noted that of the 725 new cases, 164 were tied to known outbreaks at places such as workplaces and aged care centres, a higher proportion than in previous days.

This graph shows the number of new cases each day in Victoria going back to June 1. The red line is the seven-day average, which helps to adjust for day-to-day variations.

As you can see it has been heading up and up, and on Wednesday it’s at the highest it’s ever been for Victoria, but in the last couple of weeks, it has wobbled a bit.

We have also added in some annotations that show when new measures were put in place to halt the spread of the virus. Keep in mind that it takes about two weeks for any new interventions to take effect, given the time it takes for someone who contracts COVID-19 to show symptoms, get tested and then receive their positive result from health authorities.

Based on the experience of the first lockdown in March, when the numbers decreased virtually all the way through April, many would have been expecting something similar to happen this time.

But to look at why the numbers keep going up, we have to focus on the R value, or the reproductive factor, which is a measure of how an infectious disease is spreading.

This graph from Professor Bennett calculates the R value for Victoria since late June. It compares the number of new infections on a given day with new infection numbers five days ago. Five days was chosen as the reference window, Professor Bennett said, because that is the average incubation period for coronavirus.

When it is at two, it suggests that people with coronavirus are infecting two other people on average, which would cause numbers to start doubling in a matter of days. When it is below one, people are not infecting others, and daily case numbers should start to decline.

As you can see, the reproductive factor is still consistently above one – which means case numbers will keep increasing – but not at a level where new daily cases numbers start to double or triple every few days.

Professor Bennett said her calculations corresponded with the state government’s own internal modelling on infection rates and were the best estimate possible from publicly available data.

Separate analysis from the Burnet Institute and published in the Medical Journal of Australia this week has found the reproduction ratio went from being 1.75 at the start of July to 1.16 at the end of July.

As Burnet Institute deputy director and infectious diseases physician Margaret Hellard explained, that means in early July if there were 10 people with coronavirus, they would spread it to about 17 or 18 others.

Now, if there are 10 people infected, they pass it on to 11 or 12 others. In Victoria’s case, that means 500 new cases give rise to about 580 further cases about one week down the line.

“For this week it is not surprising that we will have the same number of cases, if not 10 per cent more cases, because of the R value being what it is,” Professor Hellard said.

“Hopefully in a week or two weeks the R value will fall below one and we will see a decline in the number of cases each day after that.”

If that R value had stayed at 1.75 through the course of last month, the Burnet Insitute’s modelling suggests the numbers would have surged – predicting between 9000 and 37,000 more cases than what were recorded.

Professor Hellard said the stage three restrictions had been effective, but not effective enough to drive the R value below one, but that enhanced restrictions may be what drives down the numbers.

“It is still a real concern. Those numbers are all a person, someone’s loved one, getting sick and at risk of dying of the disease,” she said.

On Wednesday, the state recorded its youngest coronavirus death, with a man in his 30s dying from COVID-19.

“If we are to get that R value to get down and stay down, we need community co-operation, this is not just about a government bringing in a restriction measure it is about the community engaging in the response,” Professor Hellard said.

“In the next 18 months, we’re not going to get a vaccine or silver bullet cure for coronavirus. The solution to how we manage this has to come from within the community.”

At Wednesday’s coronavirus update, Deputy Chief Health Officer Allen Cheng said he hoped the numbers would start to come down within “the next week or the next couple of weeks”.