Pies down Swans but win comes at heavy cost

admin August 6, 2020 AFL Comments Off on Pies down Swans but win comes at heavy cost 145 Views 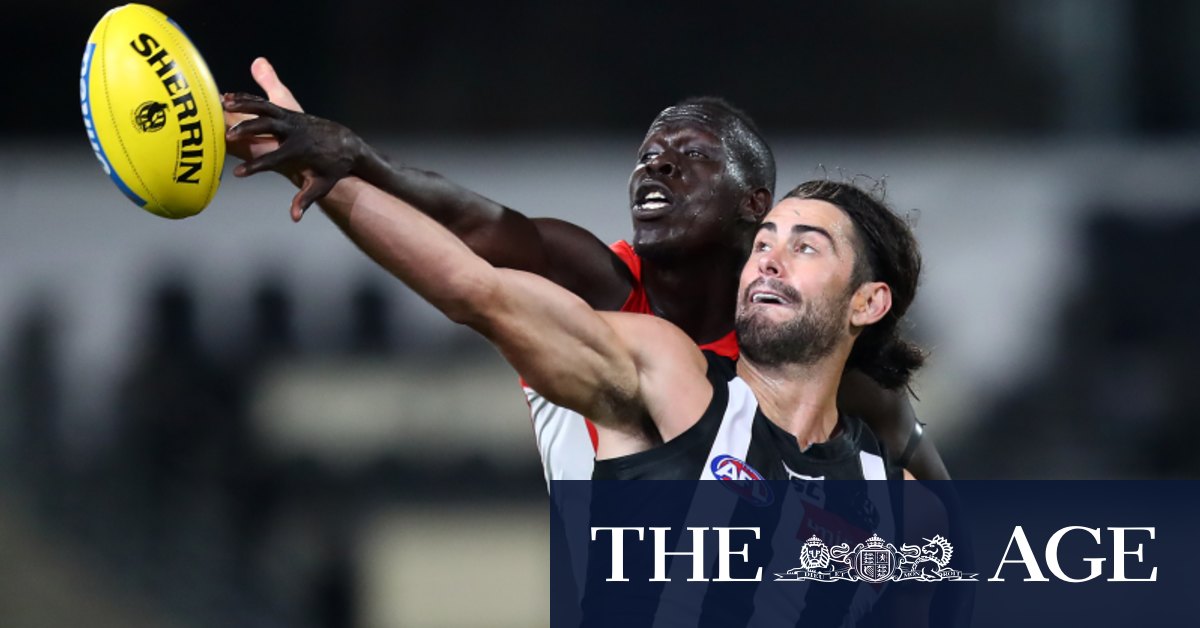 The most serious appears to be the leg injury suffered by Quaynor. The match was stopped for several minutes deep into the last quarter as the second-season defender was transported off the Gabba.

It was unclear from the replays how the youngster was hurt but the care in which he was treated by medical staff, who were holding his leg, suggested the injury was serious.

Hoskin-Elliott limped off in the first term after Jordan Dawson accidentally fell across his right knee in a marking contest and did not return. Nor did Treloar, who headed down the race in the third quarter.

It adds to an already crowded casualty ward for the Magpies, who were without skipper Scott Pendlebury and their best player at either end of the ground Jordan de Goey and Jeremy Howe.

It took a miracle intervention from the son of a gun, Josh Daicos, in the dying minutes to shake off the gallant Swans. Daicos’ snap from the boundary was the equal of the many his father Peter kicked during his decorated career.

The young Swans led by 14 points seconds before the long break but a true set shot by Jamie Elliott after the siren sparked a run of four unanswered goals.

Against the grain, perhaps due to the Magpies’ injury toll, the Swans came back in the last term but will rue missed shots from Sam Reid and Tom Papley.

That the Swans were still in the game until the final minutes was a reflection of the Pies’ wastefulness with the ball, and not just in front of the big sticks. In truth, the margin should have been significantly more.

It was mission accomplished for Nathan Buckley’s men but this was not the performance of a side tipped by many to challenge for the flag.

The Pies smacked the Swans in the clinches, winning the clearances 34-24 and the contested possession count 134-108, while the inside 50 count was also lopsided (50-33). But their ball use was shoddy, and their goalkicking frustrating. A better side would have made them pay.

The Swans can be proud of the resilience they showed under constant attack but lack the polish and composure to win regularly.

There will not be much to cheer about in terms of wins but as long as their youngsters keep improving they can be optimistic for the future.

The most impressive was Dylan Stephens, who though a long way from the finished product is already indicating why the Swans used their prized No.5 pick on him.

His preparedness to take the game on is consistent with the verve and dare the new-look Swans are attempting to play with. His fast play on and raking left foot set up a goal for James Bell in the second term and minutes later he found one for himself despite heavy attention from Brayden Sier.