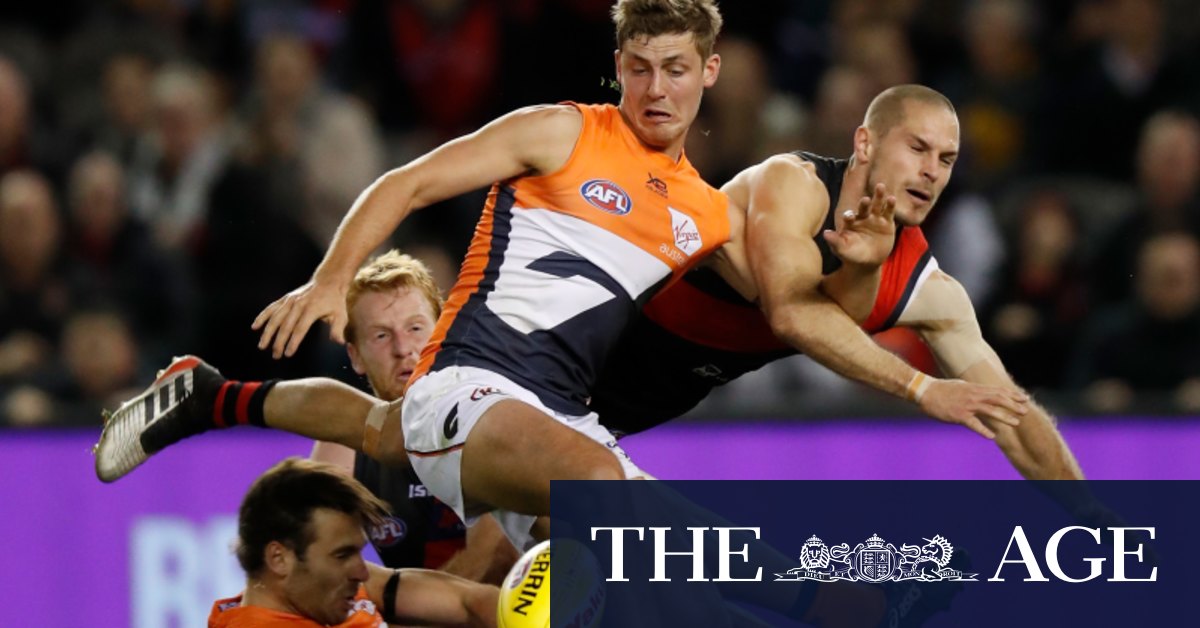 Thanks for following the blog tonight.

After a goalless first quarter, it turned into a cracking game. The Giants did win a soft-free kick late but they had too much momentum in the second half and ultimately deserved to win.

The Bombers went for a long way with three men on the bench after Jacob Townsend was concussed early. They do have a game up their sleeve, so there’s still plenty of upside to their season.

What changed after the 29-point lead: “Some of the key areas that helped us get that lead were awesome work around the contest, good ball movement … but they’re a good team. Over the course of the full game we couldn’t maintain the pressure on them and hit the scoreboard.

The Callan Ward free-kick: “What was the free kick for? I’m not sure. It’s hard to comment… No comment on the free kick.”

Leon Cameron has just spoken about:

What went right and wrong: “I thought we had control probably half way through the third, all the way to the end. We lost our structure ahead of the footy and we had to make some changes, and our midfield dropped away and they [Essendon] clearly won the battle in the second quarter.

Why both sides went goalless in first term: “We probably had too many at the stoppage creeping forward so we sent one or two back. It was one of those really dour first quarters that probably both sides didn’t want to give an inch. They clearly opened us up in the second. They dominated us in the second quarter. We kicked the first and they kicked six straight.”

“As pleasing as it was, that fightback … our boys dug in when we had to. I can’t question the efforts of our boys after half time, I thought it was phenomenal to grind back a 29-point deficit.

Callan Ward’s free-kick: “Until I see the replay, it’s hard for me to remember the incident. Until I see the incident and how he got the free kick, it’s hard to comment. There’s going to be 30-40 free kicks throughout the game; there’ll be one side disappointed and another side happy. When you’re playing with that momentum, normally that [rub of the green] can go your way.”

“We’ll look back on it. It’s a really important win, they’re hard to beat.”

The Giants’ season so far: “I think everyone probably is trying to get a read on a lot of sides. We’re 6-4, we were 3-4. We’ve played some pretty good footy, it’s not perfect, but I’m also proud of the boys because when you’re 29 points down off a five-day break against a side off a seven-day break, people underestimate that.”

Callan Ward admits post-game that he knew the impact was coming and he added a bit of mayo onto the contact.

What do you think?

That four-point game had a huge impact on the ladder.

The Bombers have a game in hand, however, after their game against the Demons was postponed.

But the Giants had the weight of numbers.

Tim Taranto had 32 touches and four clearances. Stephen Coniglio had 26, six clearances and a goal. Lachie Whitfield had 26 and three clearances and Jacob Hopper also had 23 touches.

Two goals to Jeremy Cameron in the last quarter were crucial, while Heath Shaw’s second goal – from a 50-metre penalty – was defining.

Tipungwuti had a clean clearance and was running towards his 50 as the siren sounded!

There’ll be a lot of talk about the Callan Ward free-kick with less than two minutes to play, but it was a clutch goal by Ward to seal the win.

The Bombers were massive in the second term after both sides went goalless through to quarter-time. But the Giants worked hard to get back into the game in the second half.

Adam Saad has goaled with just seconds on the clock, but it’s going to be little too late.

That was a bad free kick. The ball was there to be won and two guys going for the football, but the umpire picked out a free to Ward.

Two players going for the football and the umpire has paid a free kick to Callan Ward for head-high contact.

He’s lining up from 50 metres…

And he’s goal. Game over.

Previous Reds star Petaia out of Waratahs match after sudden death of father
Next So, the Melbourne Writers Festival starts this week …