Never too old: 96-year-old graduates from university with honours 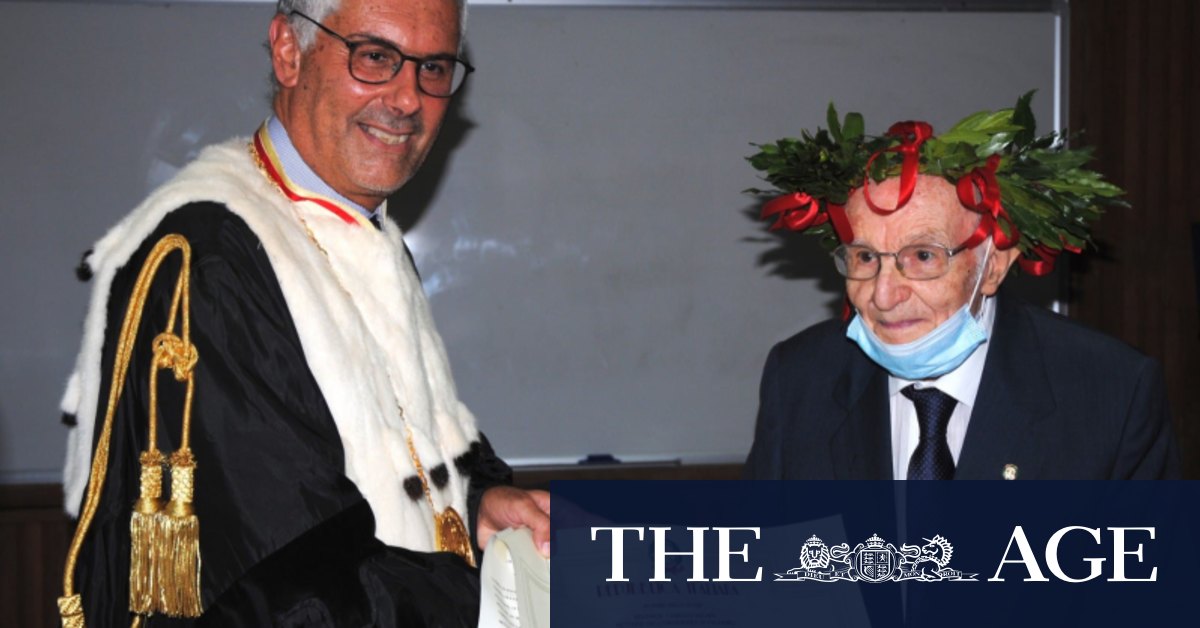 He has been honoured by his former employer, the State Railways system, and by the city of Palermo. Interview has followed interview. For Paterno, it’s all starting to feel like a bit much.

“Too many interviews, too many compliments,” he said, acknowledging that perhaps he was overwhelmed.

Studying had been his passion since he was a small child, he said, “but unfortunately life betrayed me.”

Born in Palermo in 1923 and the first of seven children in a “very poor family”, Paterno began working soon after finishing elementary school. “The family was large, there was only one pay cheque, we were under fascism, and times were tough,” he said.

Eventually, he ended up at a publishing house where an enlightened boss persuaded his father to send him back to school for a three-year vocational degree.

Paterno then worked for an insurance agency while he took private classes to become a telegraph operator. He used those skills when he was drafted into the navy in World War II.

In 1951, with a wife and two small children, he got his high school diploma as a surveyor, which led to a desk job at State Railways, where he worked for more than four decades.

It was only after he retired, in the mid-1980s, that he returned to his books, taking theology courses through the Archdiocese of Palermo after a chance meeting with a philosophy professor who urged him to follow his passion.

He got around to returning to school in 2017 — after completing another goal: writing an autobiography and seeing it published.

“I wasn’t one to bring my grandchildren to the playground,” said Paterno, speaking not of his lack of fondness for them but of his lack of interest in the usual grandfatherly activities.

There doesn’t seem to be any hard feelings. Three of his four grandchildren and one of his great-grandchildren attended his July 29 graduation ceremony, which was led by Fabrizio Micari, the chancellor of the University of Palermo.

Micari congratulated Paterno for finishing his degree with a near-perfect grade-point average. “It’s an extraordinary, exceptional result for any young man,” the chancellor said, with a hint of humour.

Micari called for a round of applause when he announced that Paterno was graduating with honours, bestowing a red-ribboned laurel wreath on the graduate’s head, an Italian tradition.

In addition to being an inspiration for the university’s students, “A graduate at this age, who has all this passion, this enthusiasm, and this talent is certainly an extraordinary spokesman for our university,” Micari told reporters later.

Paterno’s son, Ninni Paterno, said that the family had not expected all the attention.

“It’s incredible,” the younger Paterno said. “He achieved his objective, but he didn’t mean to end up in newspapers around the world.”

Paterno’s thesis on Palermo intertwined the city’s history with his own.

“He dove into the thesis, especially during the lockdown,” said Cancila.

“His story is proof that dreams can come true and that you can remain young — if not in age at least in spirit — if you cultivate interests,” she added.

Italy’s university system is based on a three-year degree, followed by a two-year masters course. University officials are hoping that Paterno will continue his studies.

He isn’t so sure.

“I have to confess that in this moment, I don’t know whether I would tackle it with the same spirit,” he said.

Still he would probably enrol anyway. “I want to keep my options open.”

Previous Middle-aged men are always wrong: lunch with Sir Tim Smit
Next What is TikTok and why is it so controversial?

To open or not to open ski slopes? Chilling question divides Europe

European tourism has been hit hard by the pandemic, with up to 11.5 million jobs …