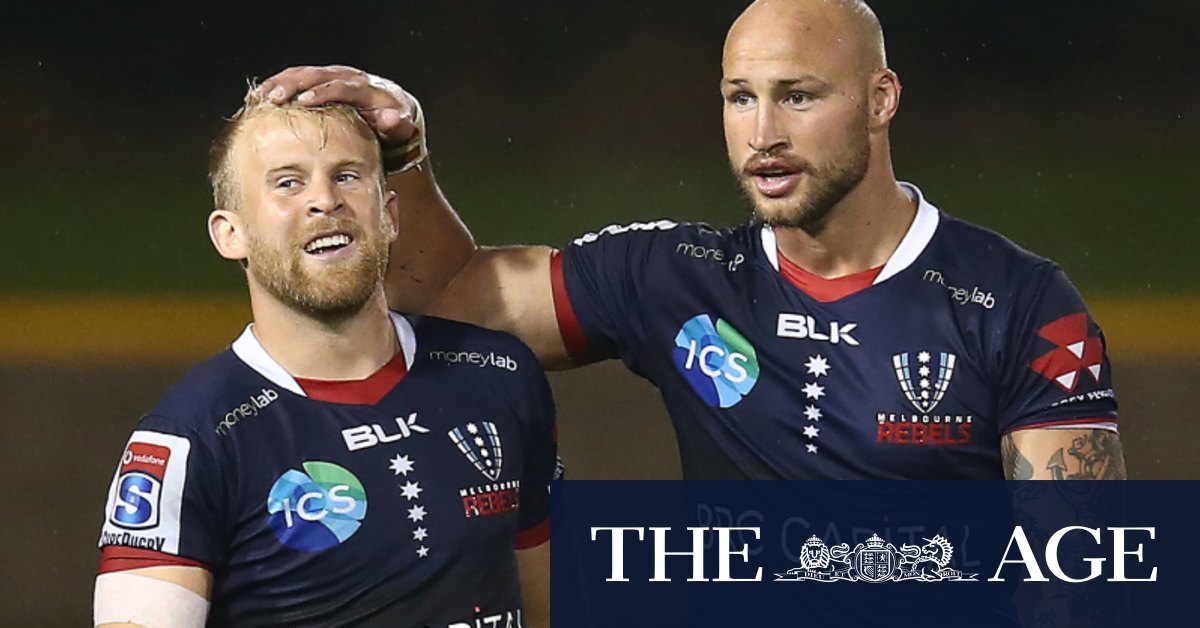 “We knew it was going to be raining all week and it’s why we made some of the selections we did,” said Rebels coach Dave Wessels. “I was pleased the boys played with a lot of intensity. If I’m honest, probably frustrated we missed the bonus point in the end of the game.

“I think we’ve beaten the Brumbies more than they’ve beaten us. I don’t mean that in a bad way but we feel confident to play them.

Australian rugby sides have struggled in wet and greasy conditions and this showing was vastly improved.

Only once in Super Rugby had the Brumbies recovered from a bigger half-time deficit when they clawed their way back when trailing 19-0 to the Highlanders in 2009.

They just couldn’t get into the game and ruined their overall seven-game winning streak. It would have been their equal-worst loss to the Rebels if not for a late try to Will Miller.

Whatever Dan McKellar said at half-time, with his side down 27-7, it didn’t have the desired effect as the Rebels controlled the second 40 minutes in a similar manner to the way they did a fortnight ago against the Waratahs.

“It’s a good wake-up call,” McKellar said. “It’s been a big month for us with travel challenges. That’s no excuse … but we need to be better.

“[We were] outplayed, beaten in all areas. You have those nights sometimes. Tonight certainly wasn’t our night. The Rebels turned up with an intensity we didn’t match early on. It’s a disappointing night but we’ll bounce back.”

Since their round one 31-23 loss to the Brumbies, the Rebels are yet to drop a game and this must be incredibly satisfying given the adversity they have faced being on the road.

The result is bad news for the Waratahs, who need the Rebels and Reds to keep losing if they’re to sneak into the finals.

A loss to the Reds on Saturday night would keep Waratahs in fourth place and put them well adrift.

Although Rebels back-rower Brad Wilkin got his name on the scoresheet in the 16th minute, it was Marika Koroibete’s grubber kicks along the deck in the lead-up at full pace that will no doubt put the entertaining five-pointer firmly in the running for the try of the season.

The Rebels’ urgency, particularly at the breakdown, was infectious and their confidence grew as the game wore on. Their defensive line speed shocked the Brumbies, whose backs had less time to work with.

NSW product Andrew Deegan took little time to warm into the No.10 saddle by nailing a 50-22 and then setting up the first of Reece Hodge’s two tries.

Deegan had a fine game, particularly with the boot, and despite wearing the No.12 jersey, Matt Toomua often slotted into first receiver as the pair interchanged fluently.

Trailing 12-0, the Brumbies resorted to their bread and butter that is the driving maul and were successful on one occasion when Joe Powell dived over, however, their opponents capitalised on a mountain of territory and possession to send a subtle reminder that Super Rugby AU isn’t a one-horse race.