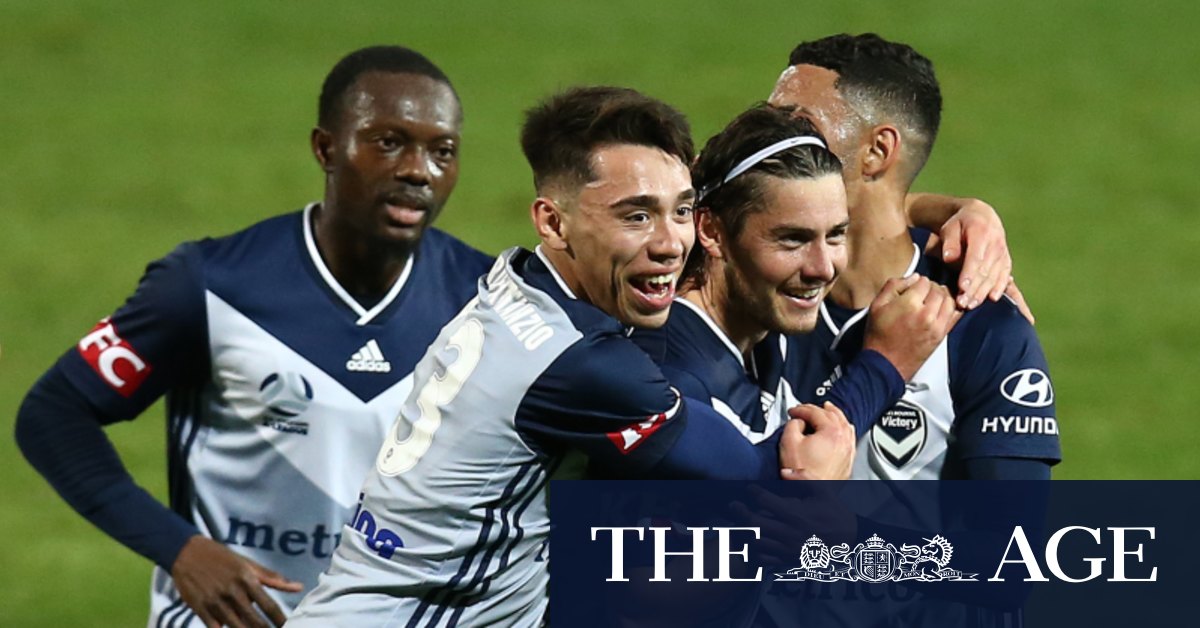 Brebner had challenged his squad members – both young and old – to show mental strength, commitment and prove not just to him but club management how much they wanted to forge for themselves a future at Victory.

Victory’s youth brigade have impressed in the games since the restart, despite their lack of results.

They impressed again here but this time they got the reward their efforts deserved.

While Perth had the majority of possession in the first half, that didn’t mean they were able to create much.

In fact, Tony Popovic’s side failed to really trouble Victory shot stopper Matt Acton in an opening 45 minutes in which Victory defender James Donachie’s closely contested battle with Bruno Fornaroli was a feature.

In contrast, Victory made the most of every opportunity they got when they went forward, managing to get shots on target and work Glory goalkeeper Liam Reddy.

It was Brebner’s team that began brightly, fizzing crisp passes around and retaining possession as they looked to exert themselves.

As the game wore on, Glory settled but Victory was still dangerous when it mounted attacks, Glory breathing a sign of relief when Luis Lawrie-Lattanzio shot wide after Nabbout’s effort from Adama Traore’s cross bounced back to the youngster.

At the other end, Glory’s Socceroo full-back James Meredith fired over when played through by Neil Kilkenny.

The goal that separated the sides at half-time came on the half-hour mark through Rojas. The Kiwi winger picked up Lawrie-Lattanzio’s cross and ran towards goal unchallenged before unleashing a fierce drive, which gave Liam Reddy little chance.

For all of Glory’s possession, there was not enough dynamism in midfield or movement to support Fornaroli and Gabriel Popovic. The West Australians nearly paid for their inertia just before half-time when Nabbout fluffed an excellent chance to double the lead, picking up the ball in midfield and driving forward, only to shoot just wide.

Popovic tried to shake things up less than 10 minutes into the second half, surprising Glory supporters by taking off Fornaroli and replacing him with Nick D’Agostino as Perth sought a different route to goal.

But within five minutes Victory had doubled their lead, the goal coming from a penalty. Nabbout drove into the Perth area at pace and Tarek Elrich’s late challenge was deemed a foul. Nabbout picked himself up and converted from the spot.

Ten minutes later Rojas put the result beyond doubt with a goal, which showcased his technique. The New Zealander took a pass from Birkan Kirdar, flicked and juggled the ball and then lashed home a half volley. Kamsoba added salt to the wounds as the final whistle loomed.

A delighted Brebner said he had seen elements in other games, which had shown the players were coming together and that the big win was a just reward for the squad’s efforts.

“For everyone connected with the club it’s just been a nice result at the right time because we needed that lift,” he said.

Previous Kangaroos focus on Brown’s injury comeback, not contract
Next ‘He gets his job done’: Knights shift already a Green pasture after demolition of Tigers