New coronavirus cases in Victoria may have peaked, but deaths expected to rise

admin August 10, 2020 Victoria News Comments Off on New coronavirus cases in Victoria may have peaked, but deaths expected to rise 15 Views 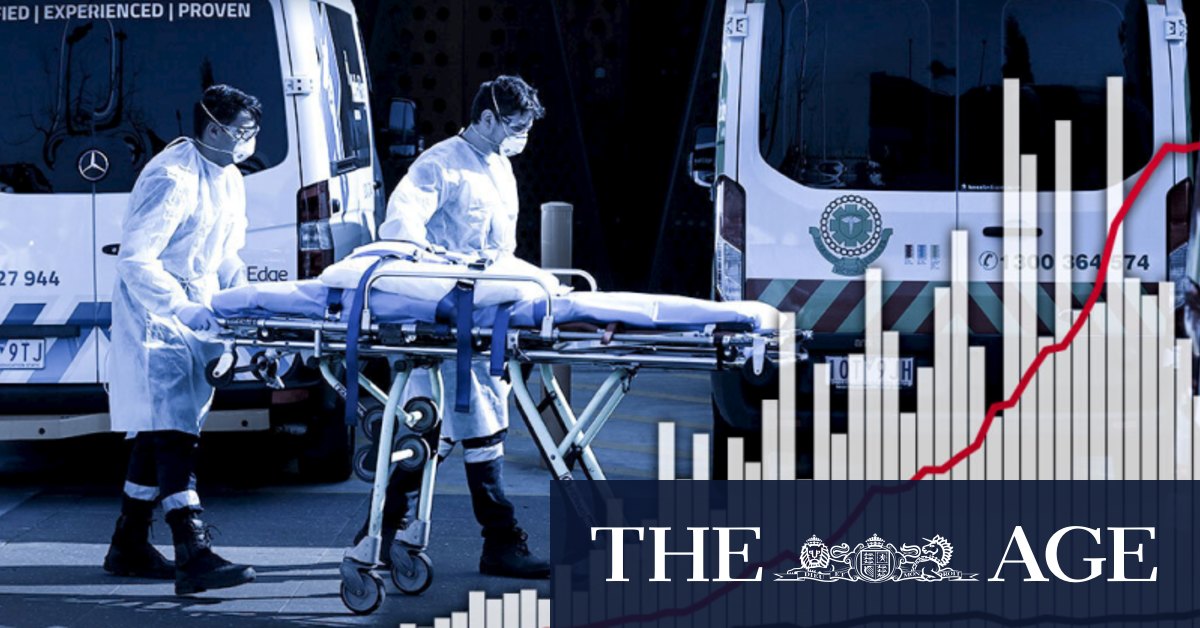 Of the 19 deaths confirmed on Monday, 14 were connected to outbreaks in aged care homes.

“Just as we saw cases peak last week, it will be this week we will probably see the peak in daily deaths,” Professor Bennett said. “The consequences of the previous infection hike is playing out in terms of the daily death counts.”

Eastern Health intensive care deputy director Graeme Duke said about 7 per cent of active coronavirus cases would end up in hospital, with about 1 per cent in intensive care.

But this doesn’t happen overnight. Just as daily case numbers reflect exposure to the virus up to a fortnight prior, increases in hospitalisations and deaths happen a considerable time after people start showing symptoms.

Dr Duke said that on average it took one week from someone catching coronavirus to begin feeling unwell, then a further week to become seriously ill to the point they are admitted to hospital.

A small number of those hospitalised will find their condition worsens over an additional week or so to the point they need intensive care support, he added.

Dr Duke said those who ended up in intensive care spent about a fortnight there, and once discharged it could be months before they made a full recovery.

“Even if we have flattened the curve, there will be more hospital admissions and deaths,” he said.

The time lag between people contracting coronavirus and ending up in hospital can be seen in data from the first-wave infection peak earlier this year.

The first wave’s worst day for new case numbers was March 28, when 111 cases were confirmed.

This isn’t to say nobody was admitted to hospital with coronavirus after April 9, what it reflects is that from that point on more people were being discharged from hospital having recovered from coronavirus (or perhaps having died) than were being admitted because of a worsening condition.

But Victoria’s second wave of cases has differed from the first, with a much higher proportion of elderly people infected, in part due to outbreaks at aged care facilities, which has led to more hospitalisations and deaths.

For example, two weeks ago to this day, Victoria recorded what was then its worst single-day increase in new cases, with 532 new infections confirmed. Of those, 93 were people over the age of 80. And last Wednesday, 140 of the 725 new cases confirmed were people in this age range.

Currently 1765 active coronavirus cases are tied to aged care – including residents and staff – which make up about one-fifth of the state’s known active cases.

Here is the same graph from higher up in this article, only instead of showing the first wave it shows the second wave so far.

As of Monday, 640 people statewide were in hospital because of coronavirus, including 48 in intensive care.

Austin Health intensive care director Stephen Warrillow said the state’s intensive care system was equipped to handle any increases in coronavirus patients, plus other critically ill patients such as those who had suffered heart attacks or strokes.

But he warned Victorians against complacency around the daily coronavirus numbers.

“We’re not through this just yet,” Dr Warrillow said.