admin August 13, 2020 Victoria News Comments Off on Patient zero for Victoria’s second wave was not a security guard 35 Views 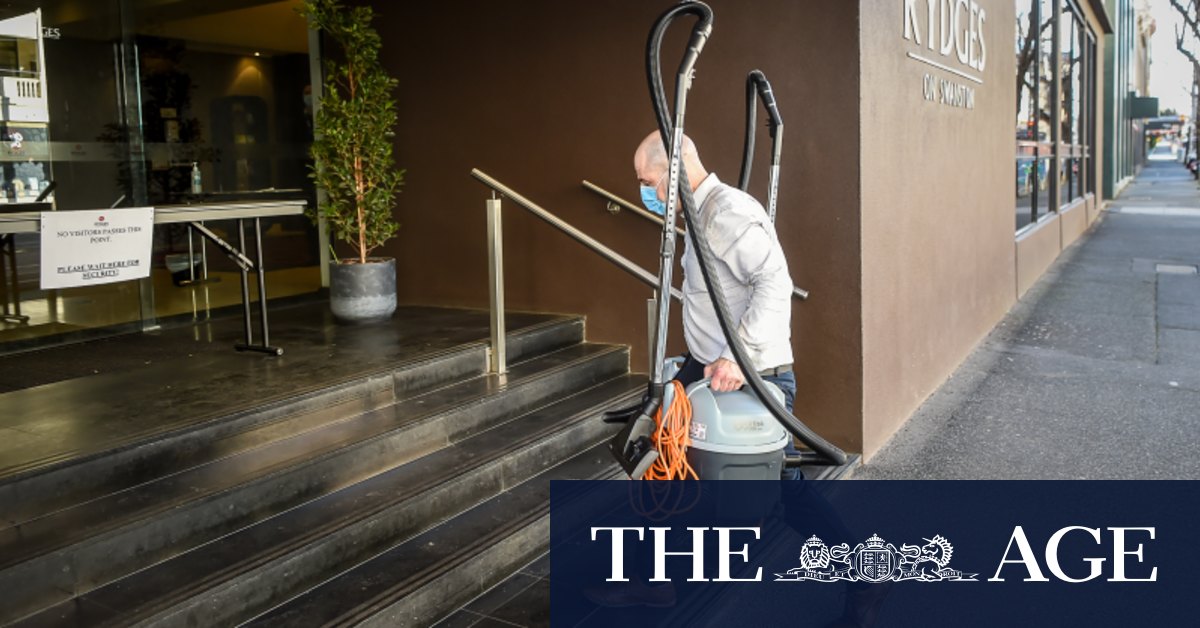 An email headed “Hotel staff member status and exposure to staff” reported on May 26 that the night manager himself was “now isolating at Rydges” and “feeling as well as can be expected”.

But it was too late. Five of the original seven guards, all from contractor Unified Security, soon returned positive COVID-19 tests. They spread the disease to their families in the northern and western suburbs of Melbourne, helping seed a second wave that has infected 15,863 Victorians, including 7866 active coronavirus cases as of Thursday. To date, 275 people have died of COVID-19 in the state.

Full responsibility for infection control lay with the Authorised Officers who were brought in from various government departments.

A source involved in hotel quarantine.

The email chain shows that officials initially mistakenly reported that a security guard was the first positive test. However, this was later corrected by a senior official who confirmed that it was a hotel employee, whom The Age and Herald have chosen not to identify.

It is not known how the hotel’s night duty manager became infected and there is no suggestion it was through any improper behaviour. Records show he displayed no symptoms on his previous overnight shift on May 23 and had registered a normal body temperature before starting work on that date.

Sources familiar with the infection-control procedures at Rydges have told The Age and Herald that a “green zone” where staff members, security guards and nurses were assured they were safe might not have been adequately designed to prevent cross-contamination.

Infection control for the hotel quarantine program was the responsibility of the Department of Health and Human Services. The department had assigned an officer in each quarantine hotel to oversee operations.

“The suggestion that security guards ever had responsibility for infection control is one of the biggest myths of this debate,” a source closely involved in the hotel quarantine program said.

“Private and public hospitals use security guards, but those guards don’t deliver babies, perform surgery or oversee infection control. Full responsibility for infection control lay with the authorised officers who were brought in from various government departments.”

The Age and Herald have previously revealed that authorised officers seconded from Parks Victoria and the state’s Environment Department were withdrawn by their management from the hotel quarantine program due to workplace health and safety fears.

A board of inquiry has been established by Premier Daniel Andrews to investigate shortcomings in the hotel quarantine program and how they have contributed to Victoria’s devastating second surge of coronavirus.

The political heat over the issue has risen in the past week after Premier Daniel Andrews was contradicted by Defence Minister Linda Reynolds over his assertion that the Australian Defence Force did not offer to help with hotel quarantine. On Wednesday, Jobs Minister Martin Pakula said responsibility for infection control sat with the DHHS, a department overseen by Health Minister Jenny Mikakos.

The inquiry headed by former state coroner Jennifer Coate begins public hearings next week. The government has directed all questions about hotel quarantine to the inquiry, although Justice Coate has said there is no legal reason for politicians not to answer questions.

Chief Health Officer Brett Sutton has previously revealed that genomic sequencing carried out by Melbourne’s Doherty Institute shows a significant proportion, if not all of Victoria’s second-wave cases, might be traceable back to breaches in hotel quarantine.

“Clearly there has been a failure in this program,” Professor Sutton said in July.

Security guards contracted to work at the hotels have come under strong criticism amid unproven allegations they mixed inappropriately with quarantine guests and ignored infection protocols, including unsourced rumours that one of them had sex with a guest.

In June, Professor Sutton’s then deputy, Annaliese van Diemen, said: “There’s been closer mingling of these guards than we would like in the workplace.”

The government has also been criticised for its failure to ensure security guards, many of whom were employed at short notice via subcontractors used by security providers Wilson, MSS and Unified, were properly supervised and trained in infection control.

Richard Baker is a multi-award winning investigative reporter for The Age.

Previous Thank you, footy, for providing an escape route from misery
Next ‘Desperate calls for staff:’ Victoria takes over three nursing homes