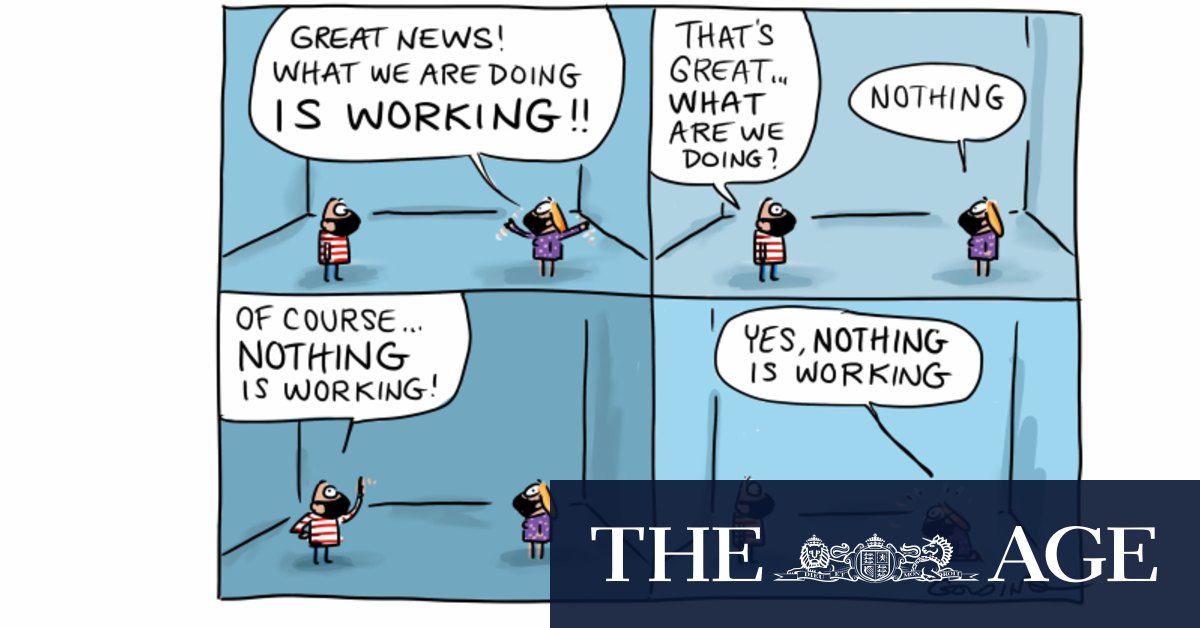 Out of respect for those who have lost their lives or livelihoods to COVID-19 and their families, the least that our national and state politicians and bureaucrats can do is to provide all necessary information about their own actions and decisions to the various inquiries that are underway without finger pointing or cover-ups. The community that they serve deserves better than the morass of self-centred claims and counter-claims, and attempts to block access to relevant documents, that are currently on display.
Lesley Day, Seddon

Together again, one day

Never would I have imagined that my country would have closed borders as stringently enforced as Soviet-era Eastern Europe. Victoria in particular is close to Tasmanian hearts. For almost two centuries Tasmanians have settled in our nearest mainland state. As a consequence thousands of us have relatives and friends in Melbourne and beyond. We await the day when once again we can reunite in person rather than in virtual space. We stand with you and our other fellow Australians in these dark times. We are thinking of you.
Bill Perry, Kingston, Tas

When you put grandma into a not-for-profit care home run by a church or a charity, you may feel satisfied that no one is making a quid out of her – ‘‘Aged care ‘making big money’ ’’ (The Age, 14/8). That’s true, isn’t it? No millionaires’ mansions here. Just a little harvesting of money from elder care to use in yet another good cause. Where’s the harm in that? The faceless people who are making these financial decisions are far from the coalface of care and deep in the money games. Grandma is just a cash cow.
Georgina Batterham, Richmond

We must scrap the act

Jill Shields (Letters, Sunday Age, 9/8) is absolutely right. The Aged Care Act 1997 enshrines the rights of providers and fails to protect the elderly. Tinkering with a clearly failed system by adding new layers of bureaucratically contrived ‘‘improvements’’ does nothing to address the underlying issue of a lack of accountability for the expenditure of billions of dollars of taxpayers’ funds. The act must be scrapped.
Robin Vote, Preston

How refreshing to read Wendy Tuohy’s article, ‘‘Take it from Michelle, it’s OK not to feel OK’’ (Sunday Age, 9/8). On several occasions in recent weeks I have wondered whether I was becoming depressed, a fair indication that I was. However, being an extroverted, self-contained male, I brushed the sentiment aside.

Reading that Michelle Obama believes the pandemic and social unrest contributed to her ‘‘low-grade depression’’ frees me up to name it within myself. It is a truly liberating experience. Public figures contribute to community wellbeing when they express their feelings with these qualities of raw honesty and frankness.
Kevin Burke, Sandringham

A family of battlers

As if we have not had any accounts of difficult life stories under COVID-19. Now we learn that a man who lives in a $30million mansion and is heir to a fortune estimated at more than $3billion, has had to resort to driving a truck to be able to feed his family – ‘‘Fox’s truckie escape’’, (The Age, 15/8). Couldn’t Scott Morrison have organised an aid package?
David Baggallay, Meeniyan

Can I propose that the Australian Electoral Commission name a seat in Tasmania or Queensland after Bob Hawke to stop the petty squabble between the four states – Victoria, South Australia, Western Australia and NSW – that claim him (Sunday Age, 9/8)?
Dave Torr, Werribee

As a teacher, I am very aware of the impact of the pandemic on students. How are they ever going to catch up on what they have missed? All students need to be given special consideration. Perhaps post-COVID-19 is the time to look at how our schools are organised and group students according to need rather than age.
Nadine McMaster, Port Melbourne

Reminiscent of a master

What a wonderful photo by Justin McManus, published as ‘‘Modern Melbourne #410’’ (Sunday Age, 9/8). It reflects the oeuvre of Jeffrey Smart. Was this intentional or coincidental? It quite carried me away. Well done, Justin.
Peter Alexander, South Yarra

So many lives saved

Re. ‘‘COVID drinkers planning to keep up lockdown pace’’ (Sunday Age, 9/8). As a recovering alcoholic, I wondered why you did not mention rehabilitation centres in Melbourne and the successful fellowship of Alcoholics Anonymous? And yet you provided phone numbers for Lifeline and Beyond Blue. Malvern Private Hospital and AA have saved hundreds, if not thousands, of lives. Including mine.
Name withheld, Balwyn North

Of course he would

Brazilian President Jair Bolsonaro’s emphatic denial of fires in the Amazon rainforest (World, 14/8) reminded me of the immortal words of Mandy Rice-Davies. When asked in court whether she knew Lord Astor had denied having sex with her, she replied: ‘‘Well, he would, wouldn’t he?”
Nigel Sinnott, Sunshine West