Snap Shot: Jack Newnes swings from The National to the national stage

admin August 18, 2020 AFL Comments Off on Snap Shot: Jack Newnes swings from The National to the national stage 12 Views 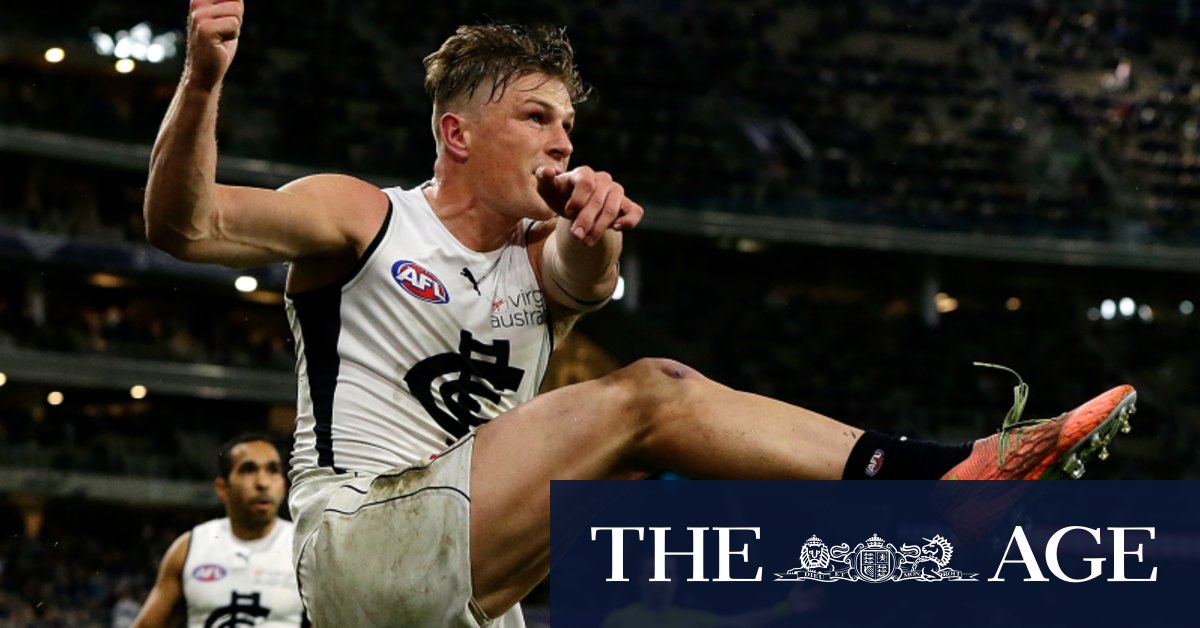 As we saw on Saturday night when he moved a photographer and a security guard out of his way and lifted some cables to help his initial stance, he is also proficient at removing any obstacles to give himself a clear swing, or in footy’s case, a clear run-up.

Those who know Newnes say if he had more time for golf he would be off scratch such is his talent but they also suspect that the time he has spent on the golf course understanding how to perform under pressure helped him stick to his routine in that moment on Saturday night when hitting a ball flush was all that mattered.

“I just went through my routine, there was a couple of cameras in the way so I tried to get them moved and then I wanted to make contact,” Newnes said post-game.

Of course, that goal is not the way Fremantle coach Justin Longmuir would have wanted to celebrate the 15th anniversary of his after-the-siren goal against St Kilda that he kicked on Friday August 19, 2005.

The goal sparked the famous ‘whispers in the sky’ controversy that led to an investigation into alleged comments umpire Matthew Head made about the Saints on the flight back to Melbourne after their coach Grant Thomas had made derogatory comments about umpires during the week.

Head, who was alleged to have said “now I know what victory feels like”, was subsequently cleared of any wrongdoing.

Carlton’s win was the first time the Dockers have lost a match to an opponent kicking a goal after the siren, having won four matches themselves in such a memorable manner. Their most recent winning post-siren goal David Mundy’s matchwinner against Richmond in 2017, with the veteran Mundy part of both Longmuir’s win in 2005 and Carlton’s win over the Dockers on Saturday night.

To Longmuir’s everlasting credit he showed great class post-match not laying blame on anyone for the result, an indication that the Dockers have a good coach in their box.

The rule change that has made no difference

Snap Shot notes that the situation involving Newnes provided a scenario where one of the nine rule changes introduced to great fanfare alongside six-six-six at the end of 2018 might have been implemented.

But, as has been the case for most of the past two years, it wasn’t.

In that list of nine new rules was one that gave players who are kicking for goal after the siren the chance to “kick across their body using a snap or check-side kick as long as they kicked the ball directly in line with the man on the mark and the goal”.

Of course, for Newnes to elect that method he would have had to use his non-preferred foot which was unlikely but the option was there if he wanted.

Snap Shot only has vague recollections of the rule actually being used once, when a Port Adelaide player elected to take advantage of the rule but as Champion Data doesn’t collect statistics on the use of the rule, we can’t be sure.

So should we celebrate that a rule has been introduced without having any impact on the game whatsoever?

We now wait with bated breath to see a player tight on the boundary, with the siren gone, starting his run up at right angles to the mark before snapping over his shoulder.