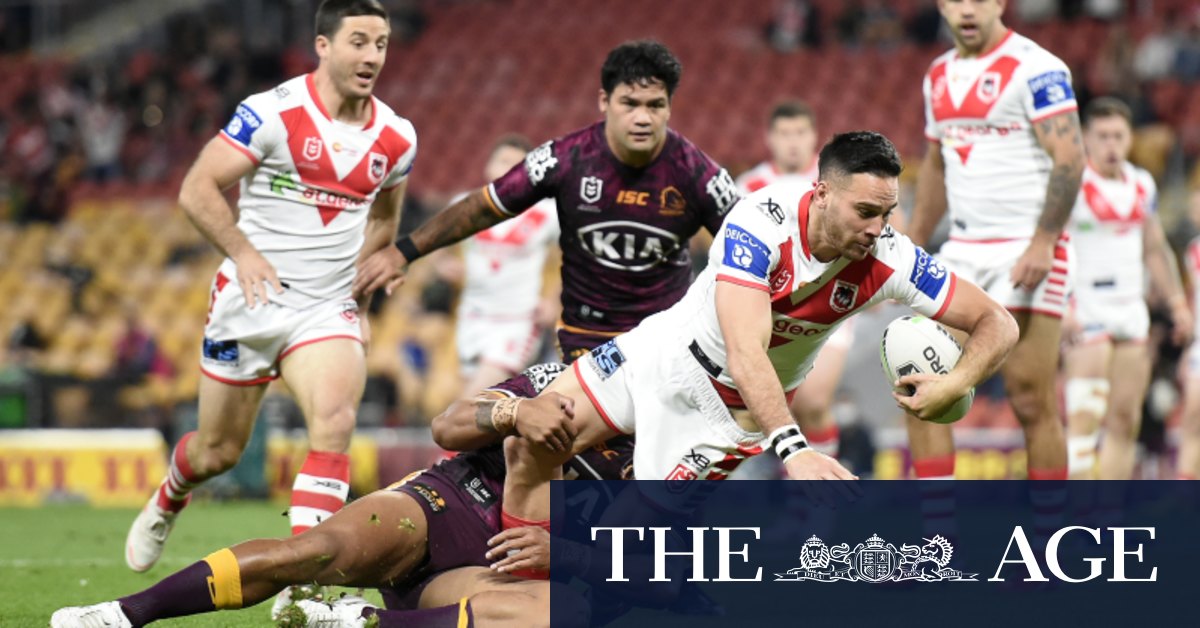 See you all this time next week.

Brisbane have fallen agonisingly short of their second win since the season restarted.

Dean Young is one from one as the Red V head coach.

Corey Norman has won the game for the Dragons.

Very clever football from the former Bronco, who spotted space and kicked the ball 70 metres downfield and winning a repeat set by tackling Darius Boyd in Brisbane’s in goal area.

Adam Clune has fumbled the ball prior to putting Jacob Host in for what would have been the searler.

Brisbane have five minutes and are up the wrong end of the field in their chase for their second win in the last three months.

Buckle up, Broncos fans. You’re in this game up to your ears.

Tom Dearden has been one of their best tonight and he’s sold a dummy, palmed Cameron McInnes, burst through a hole and scored the first try of his young career.

There have been some nervous moments for the Dragons in the last five minutes.

Brisbane just can’t find a way to crack their line and get within one score.

Adam Clune won a repeat set with a clinical kick and some superb playmaking from Matt Dufty has set up the overlap for Mikaele Ravalawa – who now has 11 tries in his last 11 games.

Zac Lomax nailed the kick from the right sideline to make it a two score game at 26-18 with 22 to play.

The Dragons are turning the screws now.

Pat Carrigan took Matt Dufty out as he chased his own grubber into the Brisbane in goal and has been penalised.

Zac Lomax turned the penalty into two points from directly in front to put the Dragons back in front at 20-18.

There’s still 28 to play at Suncorp.

Maybe this was the key to Brisbane’s fast start to the second half?

Bizarre stuff but it’s produced the goods so far.