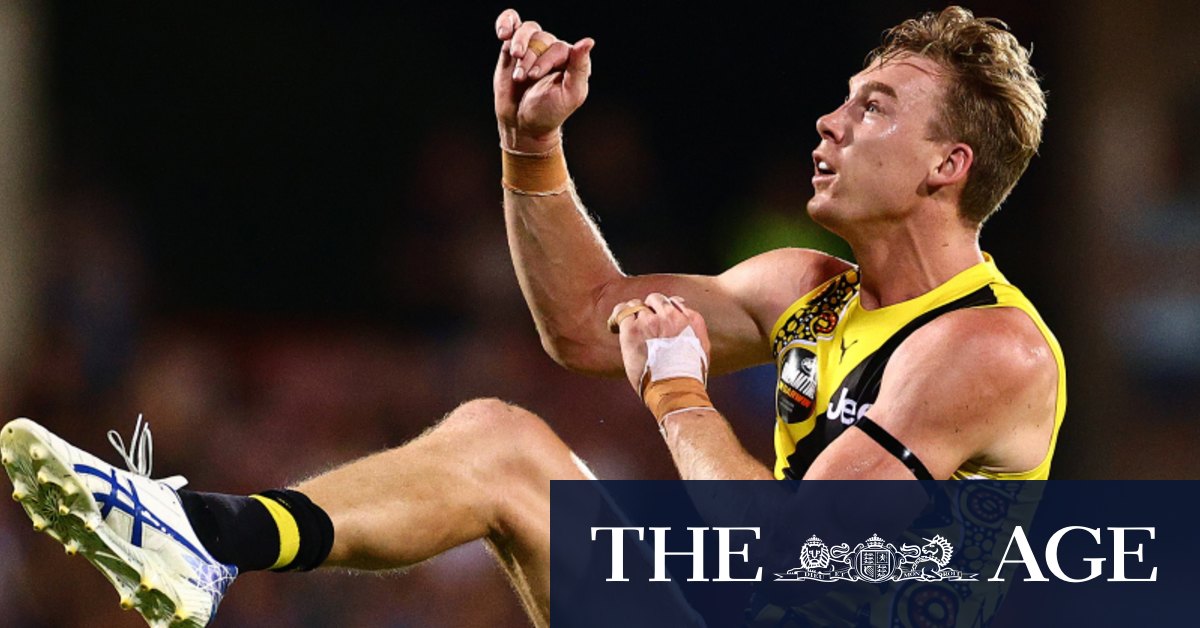 Then, last week, Lynch copped two separate striking fines for blows landed at Gold Coast pair Jarrod Witts and Sam Collins respectively. Lynch has been cited on this occasion under MRO provisions which allow Christian to effectively accumulate a player’s strikes and send them to the tribunal.

Lynch will face the tribunal early this week and is in danger of missing the Tigers’ match against fellow premiership contenders West Coast at Metricon Stadium on Thursday night.

Grimes said he received “death threats and suicide suggestions” among a barrage of abuse after an umpiring decision in the second quarter that saw Essendon’s Anthony McDonald-Tipungwuti denied a goal.

Grimes was awarded a free kick for a push in the back when he fell forward, as McDonald-Tipungwuti took a chest mark over the back of a pack and ran into an open goal.

Grimes took to Instagram in the early hours of Sunday morning to highlight some of the abuse he received, reminding Essendon fans who had messaged him that “this is a game we play for fun”.

Vlastuin posted about similar messages in his Instagram story but thanked those who had sent positive messages, too.

Players have been highlighting abuse they have received in recent weeks, since Callan Ward said he had received death threats from fans angry at the controversial free kick he was awarded earlier this month against Essendon.

Essendon coach John Worsfold said the decision to overturn McDonald-Tipungwuti’s goal had a huge impact on the direction of the match, making it clear he thought it was a dubious decision.

He said the decision had a “massive impact”.

“It obviously was something pretty drastic to overturn a kick like that. Unfortunately that is the way the umpires called it and we have to cop that, but it was a pretty critical part of the game,” Worsfold said.

If the goal had remained Essendon’s they would have led by 11 points with the momentum, but instead the Tigers immediately kicked the next two goals and went into half-time with a seven point lead.

Worsfold was less willing to judge whether the umpires made the right decision in awarding Vlastuin a 50-metre penalty midway through the final quarter, with the margin just 10 points after he took the mark.

The premiership defender, who copped contact on the shoulder late from Essendon ruckman Tom Bellchambers, threw his head back before accepting the penalty and kicking the crucial goal to steady the Tigers.

Meanwhile Port Adelaide enforcer Sam Powell-Pepper has been offered a one-match suspension for a dangerous tackle applied to Hawthorn big man Ben McEvoy. Port are due to face Sydney on Saturday.

A host of other players can accept fines stemming from Saturday’s games.