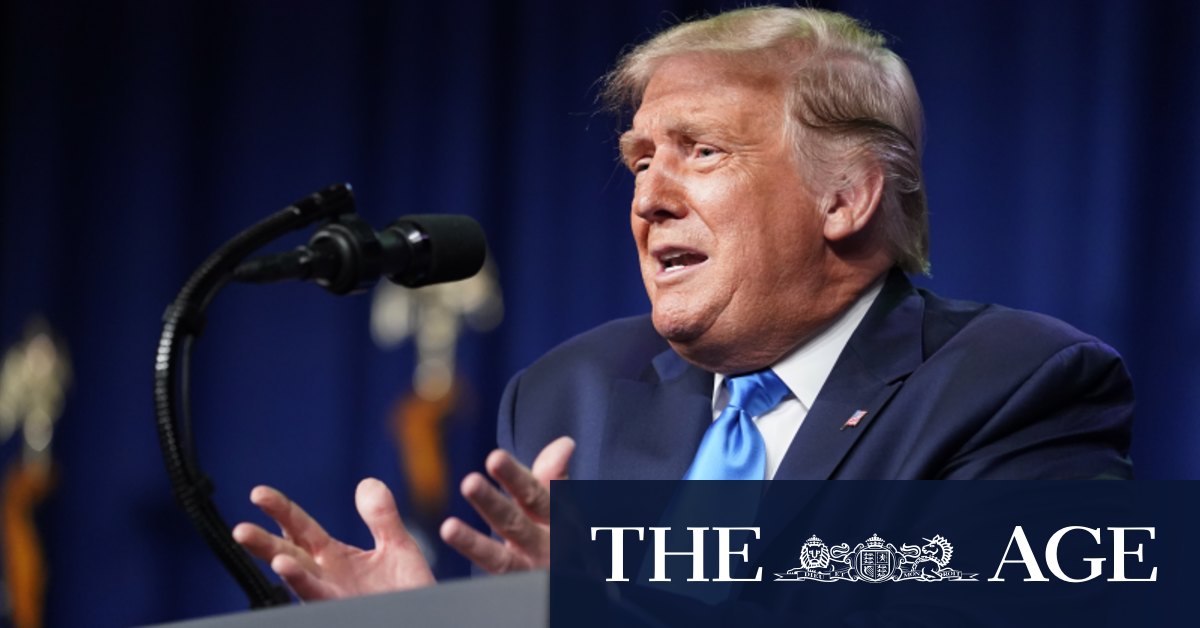 “Suppose they don’t mail them to Republican neighbourhoods,” Trump said, speaking to an audience of a few hundred Republican officials that was greatly pared back from a typical convention crowd because of the pandemic.

“They’re trying to steal the election from Republicans,” he added. The President later assured the convention delegates he would win, crediting what he said is higher enthusiasm for his candidacy than for Biden’s.

Leading up to the beginning of Trump’s nominating convention, White House officials had said the tone of the event would be more positive than the Democratic convention last week. But the President almost immediately belied those promises by again attempting to sow doubt in the election outcome and accusing his opponents of a conspiracy to defeat him.

While touching on policies he considers accomplishments — increasing US defence spending, his so-called “phase one” trade deal with China, a program to speed up development of a coronavirus vaccine — he portrayed Democrats as bent on the country’s destruction.

“Our country can go in a horrible, horrible direction, or an even greater direction,” Trump said.

State officials and many Republicans have said voting by mail is secure and have encouraged Americans worried about coronavirus infection to use the service.

Trump ran largely unopposed for the party’s nomination. Before the President secured enough votes on Monday to be the party’s official candidate for the election, Vice-President Mike Pence was formally nominated to seek his office again.

Trump took the stage at the Charlotte Convention Centre after his adopted home state of Florida ended the roll-call vote by awarding him its 122 delegates. No delegate from any state voted against Trump’s nomination.

The President plans to appear nightly during the four-day convention, which after Monday will be staged mostly from Washington because of the pandemic. He is scheduled to formally accept the nomination on Thursday in a speech from the South Lawn of the White House.

The Republican convention comes a week after Democrats, in a mostly virtual event, nominated Biden to challenge Trump in November. Republicans, though, insisted on at least a partially in-person convention. The 336 delegates representing the 50 states, six territories and Washington attended the roll-call vote inside the Charlotte Convention Centre.

Republicans opted to hold the formal vote at the beginning of the convention, as the President tries to jump-start his struggling campaign. He trails Biden by more than 7 percentage points nationally, according to the RealClearPolitics polling average.

The event marked a stark contrast from 2016, when Trump faced dissent from Republicans who rejected the reality-TV star’s brash brand of politics. Some delegates at that event cast ballots for rivals Trump had defeated in the primary, including Senators Ted Cruz and Marco Rubio, as well as then-Ohio Governor John Kasich, who endorsed Biden at the Democrats’ convention last week.

This time, having taken control of the party’s apparatus and largely purged dissenters from its ranks, the President didn’t face a serious primary challenge. And with only a few hundred delegates attending the event, the chances for upheaval on the floor of the convention were slim.

“Donald Trump will defend our fundamental freedoms, preserve our American way of life and work day and night to build our economy back to the historic levels of growth,” Ronna Romney McDaniel, Republican National Committee chairwoman, said on Monday at the event. “He has been doing all that and more for the past four years and he will do it as president in the next four when the American people re-elect him to a second term.”

In a sign of his control over the party, almost a third of the convention’s speakers are people who are related to the President or work for him. First lady Melania Trump will deliver a speech from the Rose Garden on Tuesday, and all of the President’s adult children — Donald jnr, Eric, Tiffany and Ivanka — will have a speaking role.

Bangkok: Police raided a party at a bar on a popular resort island in southern …