From the Archives, 1954: Grim trek to rescue crash survivors in the Alps

admin August 25, 2020 National News Comments Off on From the Archives, 1954: Grim trek to rescue crash survivors in the Alps 35 Views 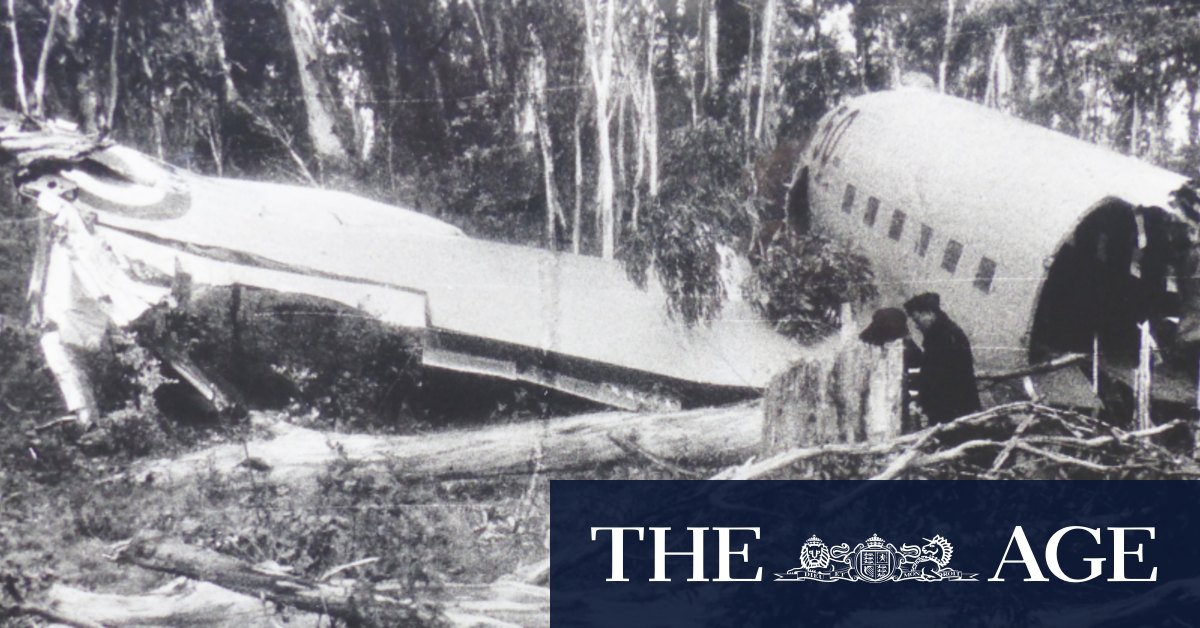 The three airmen walked to safety despite sever leg injuries suffered to Flt.-Lieut. Hawes and Pilot Officer Howie. The body of Flt.-Lieut. B. T. Millen was carried out on a litter.

The plane crashed between Mt. Cobberas and Mt. Pilot, at an altitude of more than 4000 feet.

The advance rescue party left the wrecked aircraft with the survivors at 1.10 p.m. and met a second party led by the officer commanding the East Sale RAAF station, Group Captain W. N. Gibson, at 4.40 pm.

The route to the plane sent the rescuers into virgin bush, some parts of which have never been explored.

The rescuers hacked their way through the dense snow gum timbers with axes and were halted many times by streams swollen with melting snow waters.

Each stream had to be crossed on felled trees. Progress was often slower than two miles an hour.

The scene of the crash is almost 40 miles from Benambra and within one mile of the New South Wales border.

The plane crash in Victoria, but the survivors spent last night in New South Wales after searching for cover from fierce sleet and a bitterly cold wind.

Flight-Lieut. Hawes said that it immediately became obvious the plane would have to be put down for an emergency crash landing the crew searched desperately for a clearing.

With time running out they saw the first clearing in 20 miles.

The plane came down through timer, lopping off snow gums with its wings.

The nose was buried in rocks, the wings were torn off and the fuselage was badly damaged.

Wreckage, including the engines, was scattered over several hundred yards.

“We got out as quickly as we could after the touch down,” Flight-Lieut. Hawes added.

Flight-Lieut. Walker described the night in the open as reasonably comfortable despite the intense cold and sleet.

Supplies and blankets dropped by RAAF aircraft yesterday afternoon fed them and kept them warm.

“We built a lean-to for shelter and bedded down. Several times during the night the sleet forced us to seek other shelter. It was not a night that I would like to have repeated.”

The three survivors are spending the night at Benambra Hotel.

The rescue parties today had an old disused road as their only bearing on the aircraft.

The road was cut across the mountains to serve the abandoned Mt. Pilot tin mine which closed in the early 1940’s.

Most of it was overgrown and experienced bushmen had to make wide sweeps across torturous country to pick up the trail.

Several times during the journey RAAF Lincolns and Dakotas dropped flares and directions to the ground rescuers.

The advance rescue party left Benambra at 3 pm yesterday in Land Rovers and pushed on until midnight last night to make a base camp at the foot of Ram’s Head mountain, about eight miles from the plane and surrounded by rugged alpine country and slushy marshes left by melting snow.

They continued at first light this morning and got to the plane towards noon.

After doing what they could for the survivors they began the return journey and met the larger party led by Group Captain Gibson at 4.40 pm.

Group Captain Gibson’s party was about 15 strong and travelled in three Land Rovers and an RAAF weapons carrier.

This group reached the advance party’s base camp at 2.15 this afternoon.

They proceeded on foot and eventually made contact with the group bringing the survivors to safety.

The advance party, which had borne the brunt of the trailblazing, and which slept last night in the open, was completely exhausted.

They handed the survivors over to the fresher members of Group Captain Gibson’s party, which left Benambra early this morning.

Group Captain Gibson said tonight that he had been “utterly staggered’ by the endurance and sense of duty shown by the rescuers.

Senior Constable L. Baddeley and Mr Charles Pendergast, a Forest Commission ranger, had done a magnificent job for the RAAF.

The survivors would probably have spent another night in the Alps, but for the work of the RAAF aircraft.

After leaving the basecamp this morning the advance party battled nine miles through the bush in the wrong direction. They were following a rough bearing given to them before they left Benambra yesterday.

However, an RAAF Lincoln constantly circling overhead pinpointed the route to the aircraft with flares and low swoops over the scene of the crash.

“And there’s just been massive, massive interest. It’s taken us by surprise to be honest,” …