From the Archives, 1976: Ararat prison escapees captured in Footscray 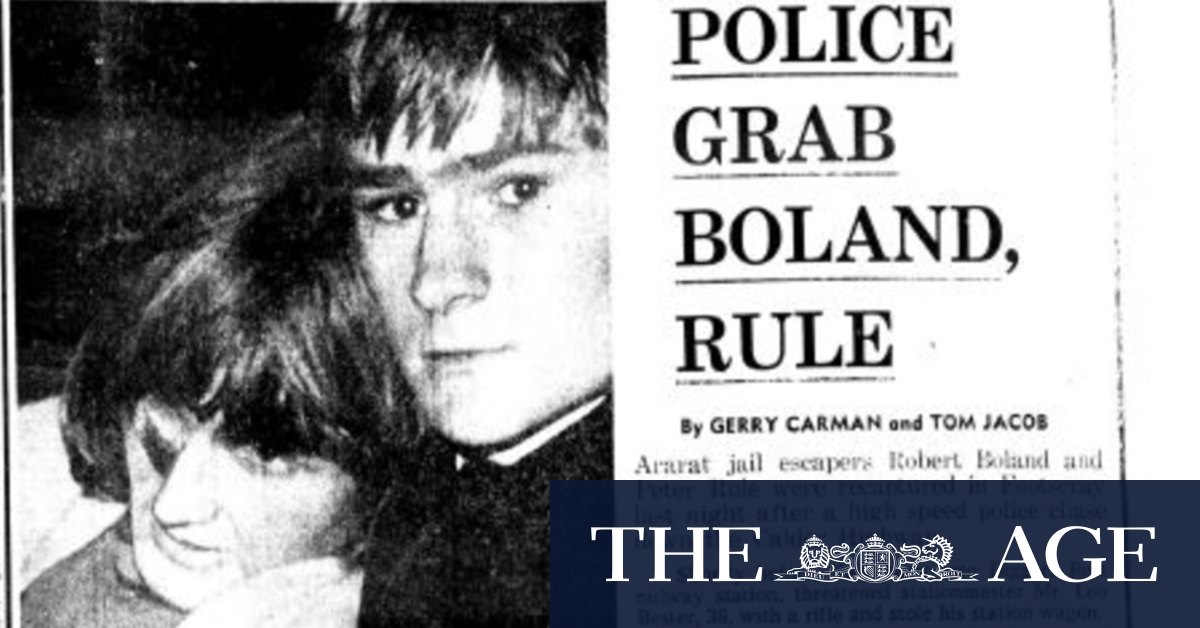 A railways spokesman said Boland pointed the rifle at Mr Bester and said: “Hand over the keys or I’ll blast you.”

The pair told Mr Bester not to call the police for two hours.

Earlier, police cars rushed to the Toolern Vale area after a report of three shots being fired.

Police were alerted as Boland and Rule sped away from the Diggers Rest railway station.

They set up heavy roadblocks on the Calder Highway and the Tullamarine Freeway between Diggers Rest and Melbourne.

Police patrols were also sent into the north-western suburbs.

At 10.25 pm a Footscray divisional van spotted the stolen 1971 Holden station wagon at a petrol station at the corner of Ballarat Road and Elanor Street, Footscray.

Reinforcements were rushed in, and armed police, led by Senior Detective Noel Greig, arrested Boland and Rule as they were filling the stolen station wagon with petrol.

Two rifles were lying on the back seat of the station wagon.

It was the third time the escapers had tried to get fuel – they had previously stopped at two service stations which had closed.

Neither man offered any resistance. Both expressed relief that the long run was over.

Early this morning, Boland and Rule were being questioned at Russell Street police headquarters.

Boland and Rule escaped from Ararat jail on Monday. Boland, who fled from the jail’s golf course, was serving a 16-year sentence for his part in the 1972 Faraday school kidnap.

Rule had only a few months to serve on a two-year sentence for housebreaking.

On Tuesday the pair held up a farmer and his family at a lonely house near Ararat and stole a utility, food, a rifle and ammunition. They later abandoned the utility near Gisborne.

Mr Ruben Boland said after hearing of his son’s recapture: “I’m so happy no one came to harm. My son wouldn’t have harmed anyone. I told you so.

“My wife and I are so relieved.”

He said the men had walked “a long way” to Diggers Rest. He would give no further details.

Both men will appear in Melbourne Magistrate’s Court this morning.

Inspector Walters said they would be charged with escaping from custody, and “obviously other charges will be made.”

Previous ‘No finger pointing’: Seibold quits role with Brisbane Broncos
Next Fortnite creator on a crusade against Apple and Google