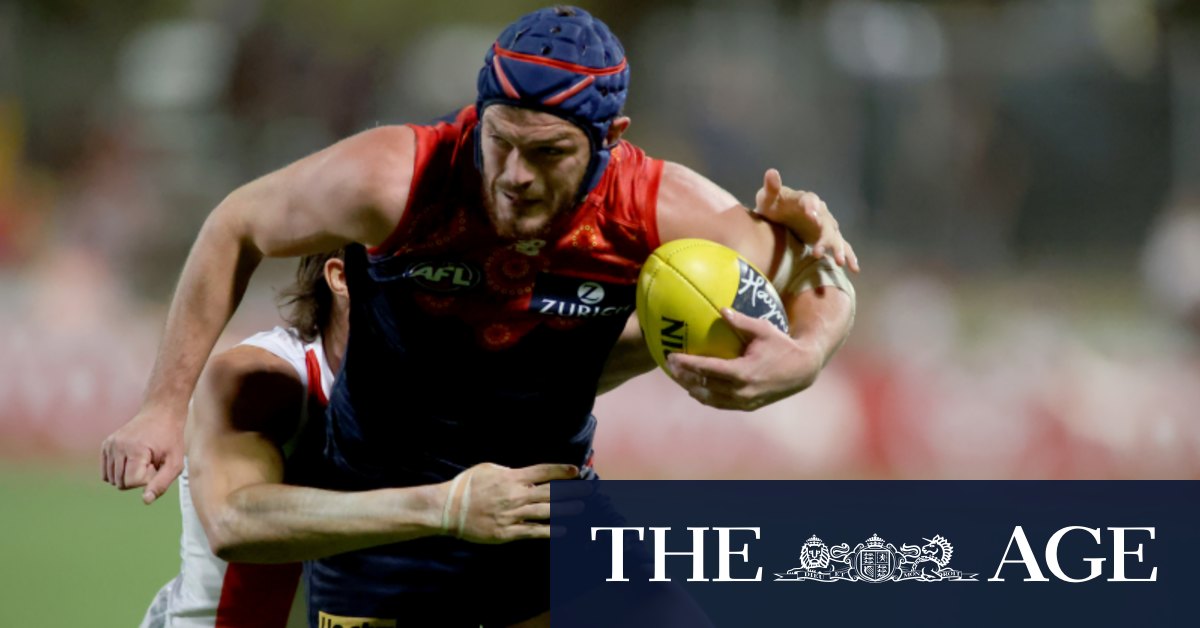 While Goodwin was a beneficiary of this, he re-iterated his stand that full technology was needed at all venues.

“I think I spoke about this a while ago around the importance of getting it right. If we can’t get the technology to a point where you can’t make critical calls, you are better off not having it,” he said.

“I thnk it’s there designed to pick up the obvious ones but when you are trying to pick up touch ones from a fair way out or on the goal line, you need the technology there at every venue.”

Saints coach Brett Ratten, dealing with his fourth loss by six points or less, did not press the issue.

“It doesn’t really worry me. It’s the AFL’s call whether they want to put the money in or the resources into it or just back in the umpire,” he said.

“We have got bigger things to worry about at our end, trying to kick straight, trying to convert.”

Petracca may have only had 15 disposals but he was strong through the midfield and dangerous up forward. Two of his goals came in the first term but his best was saved until last. He is enjoying is football more than ever and the rewards have been on show in what has been a break-out season for the No.2 pick of the 2014 national draft.

“He is a great player to have at our footy club. He is going to excite our supporters in the years to come. As a coach, you get the privilege to be able to place him through the midfield or as a forward when you need him to influence the scoreboard,” Goodwin said.

“I thought tonight he had a realy good balance in this game. I thought he defended really strongly through the midfield, then when he went forward, he had multiple opportunities to impact the scoreboard. So, he is an incredible player and he is just continuing to get better and better.”

Key defender Steven May was arguably best afield. He held Max King to only one goal while having 22 disposals of his own, including six intercept marks. His run and creativity was also crucial. His stellar year is reflected in that he has conceded only 10 goals to his direct opponents.

“He has been unbelievable all season. He has been one of the best key backs in the competition throughout the year and tonight he displayed that again,” Goodwin said.

“His ability to mark the ball on entry was outstanding and went a long way to winning the game. Also his ability to clear the air and beat good opponents.”

Ratten was left to lament wasteful disposal heading into attacking 50 – the Saints had 16 more entries (46-30) – but the Demons were able to regularly intercept. Jack Steele, Zak Jones and Brad Hill found plenty of the ball.

“We didn’t use the ball well enough. If blokes are under pressure, you can live with that … but some of the kicks when they weren’t under pressure, and it was an easy kicks – that wasn’t great,” Ratten said, his side now with a mid-week bye before facing Hawthorn on Sunday week.

The Demons, having taken down a top-eight side for the second time this season, are now primed to return to the finals and can strengthen their hold when they face the struggling Sydney Swans in Cairns on Thursday.

“We have been building as a side throughout the year, that’s four out of the last five. We are starting to build a good block of form,” Goodwin said.

Previous Back to cars: Public transport expected to take post-pandemic beating
Next Yvonne gained strength as the pandemic raged, and received a gift of life