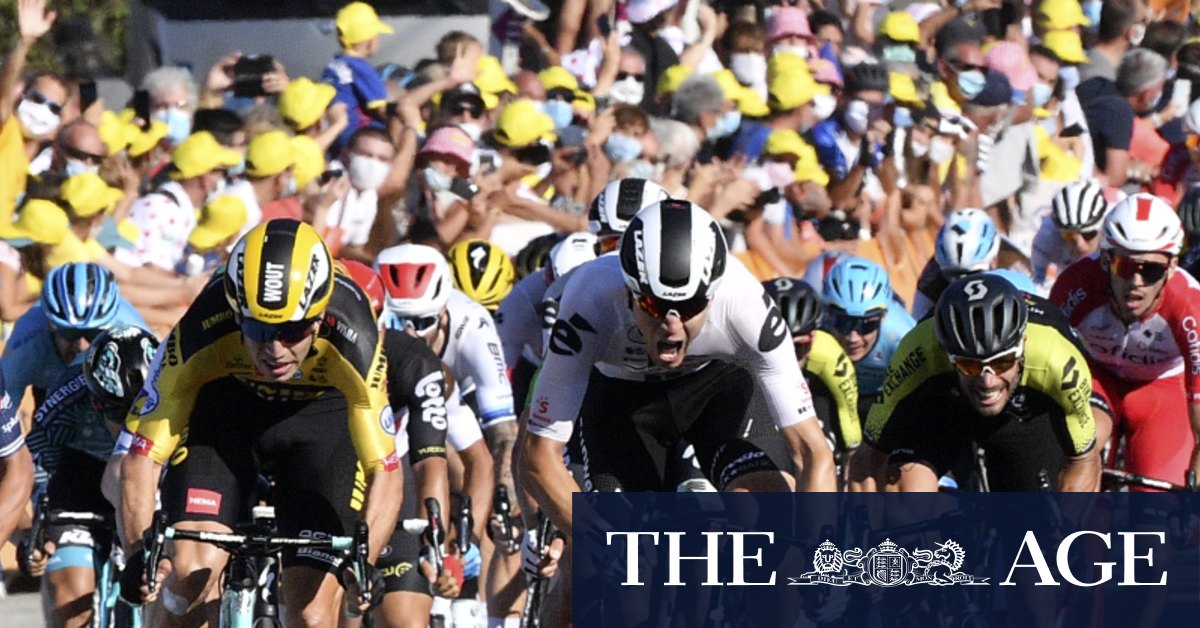 Deceuninck–Quick-Step sports director Tom Steels said later that the team assistant had been unable to position himself just before the 20km mark because it was too dangerous.

“It’s a pity to lose the yellow jersey like this,” Steels said. “We know about the 20km rule, but today there were also some special circumstances … it was the only spot we could still give the bottle.

“But we made a mistake, nothing to do about it. Julian was disappointed of course because he didn’t do anything wrong.”

“I don’t think anybody wants to take [the yellow jersey] like this,” said the Team Ineos-bound Briton, who finished fourth overall in the 2016 Tour.

“I was on the bus, showered, waiting for the last few guys to shower and somebody called the [sports] director to tell him I had to go to the podium.”

Van Aert, the best all-round rider this season, had no rival in the finale after the whole peloton took it easy all day long.

“It was maybe the most easy stage I’ve ever done in a cycling race because no breaks, no high pace,” said Van Aert, who on Tuesday did all the heavy work when Jumbo Visma teammate Roglic won the fourth stage.

“But everyone was pressing a lot at the end and it was hectic. I knew it was a stage that suited me and just so happy that I got the opportunity from the team to go for it and to finish it off was sweet,” added the Milan-San Remo champion.

With a tough sixth stage ahead and crosswinds expected at the end of the ride to Privas one day after a punishing mountain-top finish, the peloton rode at a leisurely pace.

No early breakaway was formed, a first since riders went on strike in 1998 to protest against some of their peers being detained for questioning by police amid the Festina affair.

In 1995, a Tour stage was turned into a procession one day after Italian Fabio Casartelli died in a crash during the race.

Thursday’s sixth stage is a 191km trek from Le Teil to a tough climbing finish on Mont Aigoual, where Yates’ yellow jersey will already be in danger.

“I won’t change my way of racing, I’ll just take it day by day,” said Yates, who was only targeting stage wins in this year’s race.