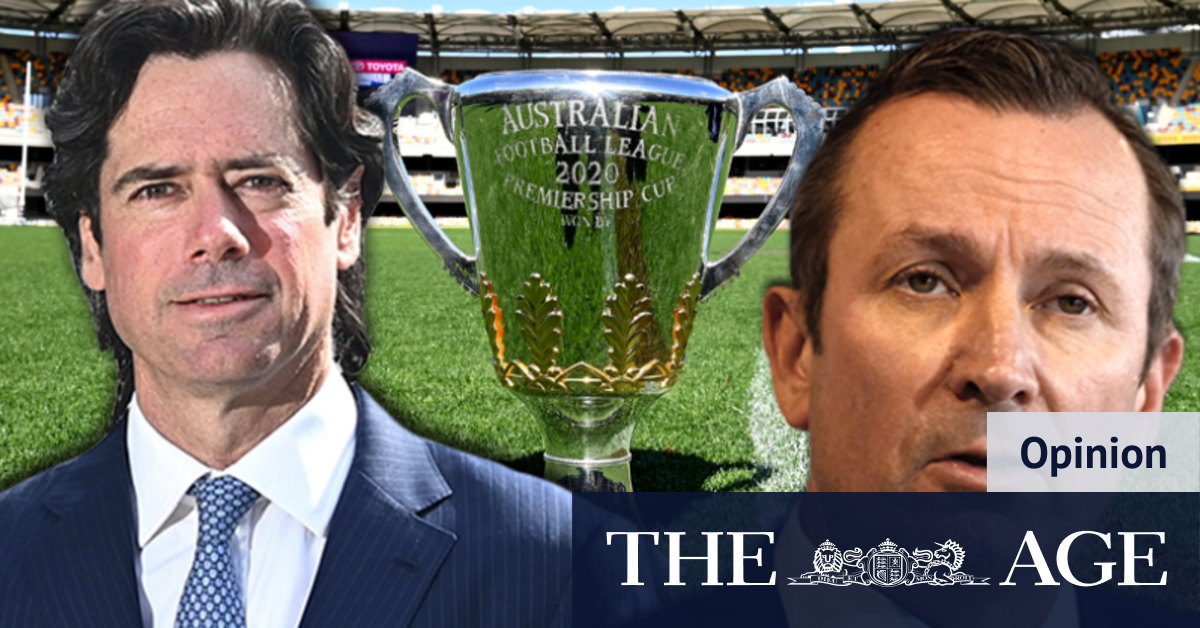 While most of us would recognise the merit in this, remember this same government made provisions for a billionaire to exit and re-enter WA at least twice with minimal hassle, but won’t budge for Australia’s biggest sporting event and one we will never get another shot at for 40 years.

West Coast and football fans should be livid at Mr McGowan, not the AFL. The WA club will likely earn a home final, yet it probably won’t be played at Optus Stadium.

This was also the only season in history where a WA team might have the possibility of playing a home grand final. Imagine that? Mr McGowan didn’t.

The Premier said after the decision on Wednesday that WA “has the best stadium, strongest AFL crowd, but they went to Queensland for other reasons”.

Treasurer Ben Wyatt echoed: “If the AFL wanted the best stadium in a state that is actually an AFL state, then they would have come here. In the end they haven’t.”

It all smacks of entitlement.

AFL chief executive Gillon McLachlan was very clear on Wednesday why the season decider wasn’t coming to Perth: “To play any finals there including the grand final, there would have to be a seven-day hard quarantine before we could play the game. Everyone understands the challenge of playing in that.”

The AFL has tried to maintain the highest levels of equality and integrity in a season where it is logistically impossible. They couldn’t just ignore both when it came to the most important phase of the season: finals.

While Queensland went out of its way early to help the AFL, establishing hubs on a whim and high rollers to back the season, Mr McGowan never warmed to the league; whenever the topic was raised in daily news conferences mid-year, he refused to budge on granting exemptions to AFL players that would have seen the season resume with a majority of the league’s 18 teams in WA.

“It’s a little bit rich and it seems to me they’re a little bit pampered and they should be prepared to do the hard yards and go somewhere else,” he said in May.

Mr McGowan has snubbed the AFL all season, and every year and as far back even as the opening of Optus Stadium.

He recently criticised the AFL for not contributing to the ongoing costs of the stadium, or for helping his government finish its construction when after coming to power in 2017, even though league financing was never part of the original contract with the Barnett government and WA Football Commission.

Mr McGowan has never accepted the AFL’s annual invitation to premiers to attend the grand final at the MCG, the only state leader not to do so. His attitude was evident in January 2018, when he opened the gates to the $1.8 billion stadium with a call for the AFL to do the right thing and hold the grand final there.

“It’s the least that the rest of the country could do for Western Australia, considering the GST they take from our state, to hand the AFL grand final to our state each and every year, for nothing,” he said at the time.

“It would be a small compensation but it would be something.”

While there is no doubt Queensland deserves to host the 2020 decider, the money was in the west, and Mr McGowan probably banked on this being enough to sway the normally finance-focused AFL.

But this is no ordinary year.

The usually conservative veteran AFL caller Gerard Whateley pointedly acknowledged on Tuesday that although Perth would be “hard to walk past” financially, Mr McGowan was the sticking point in the AFL’s eyes.

“Are we really prepared to reward (WA Premier) Mark McGowan, who has been nothing but a pain in the neck to us the whole way through?” he asked.

“The quarantine arrangement is an issue, both teams would be hugely restricted in the lead up to a grand final, yes they can play but the parameters would be so tight that it would drain some of the excitement to the build-up and there would be no chance to interact and celebrate in the aftermath.”

As is the case in sport, it’s not the best team that usually wins, but the one that wants it the most.