NRL 2020 as it happened: Papenhuyzen stars for Storm as Souths’ top four hopes dealt a blow

admin September 4, 2020 Sport Comments Off on NRL 2020 as it happened: Papenhuyzen stars for Storm as Souths’ top four hopes dealt a blow 20 Views 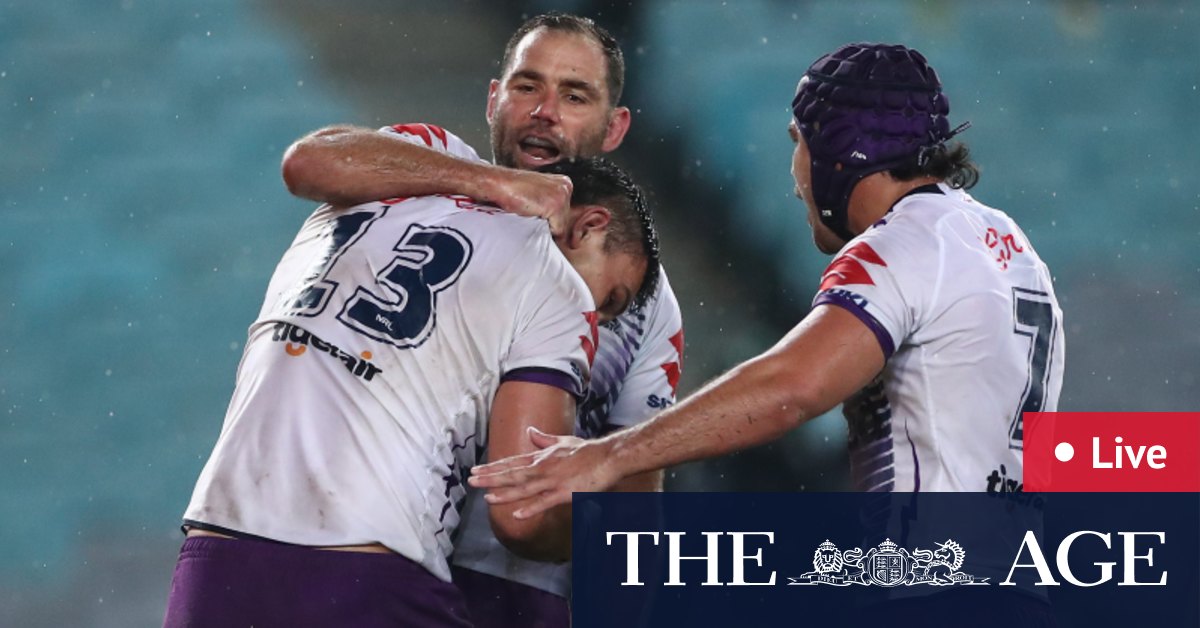 That’s all for tonight’s blog.

Hats off to the Melbourne Storm. They just keep finding new ways to win.

They are going to be seriously hard to beat come October. Between the Storm, Panthers and Roosters, we have one hell of a premiership race ahead of us.

But the talking point of the night will undoubtedly be Chad Townsend’s send off in the 6pm game.

Send off or not, it was one of the biggest shots you will ever see.

Thanks for tuning in tonight. See you all this time next week.

The final siren has sounded at ANZ Stadium.

Melbourne did Melbourne things and scrapped their way to a 22-16 win against Souths, who will be bitterly disappointed they let a golden opportunity to beat what is arguably the premier side in this year’s competition.

Cody Walker has knocked the ball on and that will be that for Souths.

A very disappointing second half for Wayne Bennett’s side, who did not adapt to the slippery conditions after playing superb football in the first 40.

The Melbourne halfback bundled Alex Johnston into touch just as he appeared certain to score in the left corner.

It’s still 22-16 in favour of the visitors with six to play.

Christian Welch has fumbled the ball 30 out from his own line, opening the door for Souths.

Let’s see if they can find a try to level the score with 10 to play.

The Storm are in front.

After 65 minutes, they have their first lead of the night.

Quick hands from Cameron Smith found Ryan Papenhuyzen, he danced through some disorganised Souths defence and foudn Cameron Munster on his left, who crashed over to give Melbourne their first lead of night.

Cameron Smith put Tino Faasuamaleaui through a hole from close range, added the extras and it’s now 16-all with 20 to play.

That Smith pass may have been forward on second look but hey, who are we to judge.

That was a scrappy set from the Storm but a perfect Ryan Papenhuyzen kick forced Souths to bat the ball dead.

A little Bayley Sironen knock on from a Jahrome Hughes grubber has given Melbourne a fresh set inside Souths’ 20.

Let’s see if they can nab the try which will put them back on level footing with the home side.

Not a great deal has happened in the last 10 minutes, as both sides adjust to the slippery conditions.

Previous Murray to focus on building endurance after US Open loss
Next AFL live scores: Lions hold out Pies to go second on the ladder