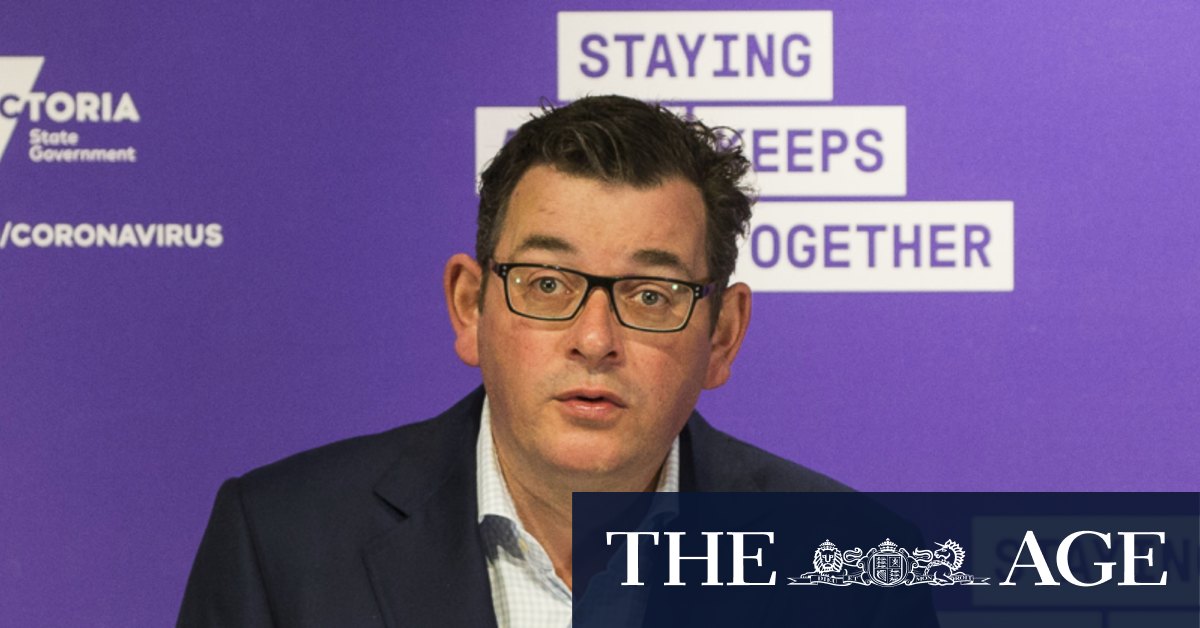 Chief Health Officer Brett Sutton said the state was well on the way to defeating the coronavirus with a “slow and steady” decline in cases.

“We are on the winning stretch now, there’s no question. This is the last gasp of the virus, and we need to work harder than maybe we’ve ever done before to make sure that that last gasp is, indeed, the last one,” he said.

Professor Sutton renewed his call for people with coronavirus symptoms to get tested.

Professor Sutton said the cases in metropolitan Melbourne were concentrated in just a couple of dozen local government areas in the city’s north and west and in the south-east.

“So, again, if you have compatible symptoms – a runny nose, a tickly throat, headache, cough, fever – please get tested. We’ve seen reasonable numbers of testing in the last couple of days, but we do need to keep that up,” he said.

‘Hanging out’ for vaccine

Professor Sutton said the government’s strategy was being driven by the principle that the current case load the tail end of the virus.

“That we are working to a future where this virus remains under control for the long-term, because we can’t afford it, no-one can afford it globally, to have a huge resurgence, so we need to keep it under wraps until a vaccine is available,” he said.

“There are over 30 [vaccines] are in those phase three trials with tens of thousands, hundreds of thousands of people around the world now going through phase three trials where we will see what a vaccine might be able to achieve, and if just one of those vaccines, and there will be probably three or four or more of those vaccines that show effectiveness, that are safe, and can be produced, that is what we are hanging out for, so if we can do that and hang on for those months ahead when a vaccine is available and can be provided across the population.”

Professor Sutton said cases in Colac were the only regional infections today and that many regional councils would not see new cases.

“That said, there might be cases out there, so do not be complacent and think that there isn’t the possibility of cases being introduced into your postcode, if you’re in regional Victoria, get tested if you’re symptomatic,” he said.

Asked whether aiming for zero community transmissions was realistic Professor Sutton said restrictions could be relaxed before the state got to that point.

“We’ll make judgements as we see the numbers each and every day. There aren’t many places around the world that have got to those low levels.”

“That’s hugely challenging, if you reflect on what 700 cases a day meant for Victoria. We are just getting to a position where we get low enough numbers that we can sustain those numbers at the lowest possible level. It’s not to say that we won’t, you know, progress with relaxation of restrictions, with some small numbers of cases, as long as we can sustain control of those numbers,” he said.

“That’s the principle. The long-term sustainability of those numbers – that’s what we’re aiming for.”

Mr Andrews said there was just one new case with an unknown source and 286 healthcare workers who were listed as active cases.

The total number of active cases across the state had now fallen to 1956.
Mr Andrews said there were now only 102 active cases in regional council area where people are living under stage three restrictions.

“Obviously, at 76 new cases, that is still a really significant challenge for us. And to open up with those numbers would, of course, see the total number of coronavirus infections explode.”

Mr Andrews is due to outline the government’s plan for easing restrictions on Sunday and said Victorians would need to be patient so that contact tracing systems were not overwhelmed by caseloads in a new wave.

“As frustrating, as challenging as it is, we need to stay the course on this. That’s why tomorrow we will outline a road map to ease these important restrictions, to ease out of the second wave, once it’s appropriately and properly defeated, truly defeated,” he said.

“So that we can be sure that the settings we lock in can be defended. There will be outbreaks, there will be hopefully very small numbers of additional cases in the weeks and months to come.

“But that’s gotta be a fair fight. Pretending that any contact tracing team anywhere in the world could keep numbers low, when you start from a high base, particularly a high base in terms of mystery cases, that doesn’t do any of us any good.”

Mr Andrews said those who argued the virus was a risk only to the elderly were mistaken.

“But I will just say, there’s a bit of a tone out there that, well, these people are all very old and it’s only having the most tragic impacts amongst those who are very old. Well, again a make the point, if the health system is overrun, like it has been in New York, Paris, Spain, the list goes on, like it has been in so many parts of the US, then it’s not just COVID-19 patients who can’t get the care that they need, it is every patient who needs time critical care,” he said.

“They finish up going into a system that is overrun and overwhelmed. That’s just the fact of it.

Mr Andrews has batted away a suggestion that the national cabinet has “fractured” after consensus was not reached between states on several issues on Friday.

“From my point of view, I wouldn’t describe national cabinet in those terms, it has served us well and will continue to serve us well,” he said.

“There are some things that all of us need to put aside the things that sometimes occupy us, and instead of acting on those sort of interests, we act in what is undoubtedly the national interest, that is what has driven national cabinet, and I don’t see that changing.

“From my point of view, the outcome in relation to having freer movement of key agricultural workers and the process to improve those arrangements between South Australia, Victoria and New South Wales was a very important outcome,” he said.

Mr Andrews said he was not going to provide “gratuitous commentary” on the border closure policies of other states.

Mathew Dunckley is digital editor at The Age. He was previously business editor for The Sydney Morning Herald and The Age. Based in our Melbourne newsroom, Mathew has almost 20 years experience as a journalist and editor.