‘I love his story’: Blues’ match-winner makes his mark

admin 3 weeks ago AFL Comments Off on ‘I love his story’: Blues’ match-winner makes his mark 8 Views 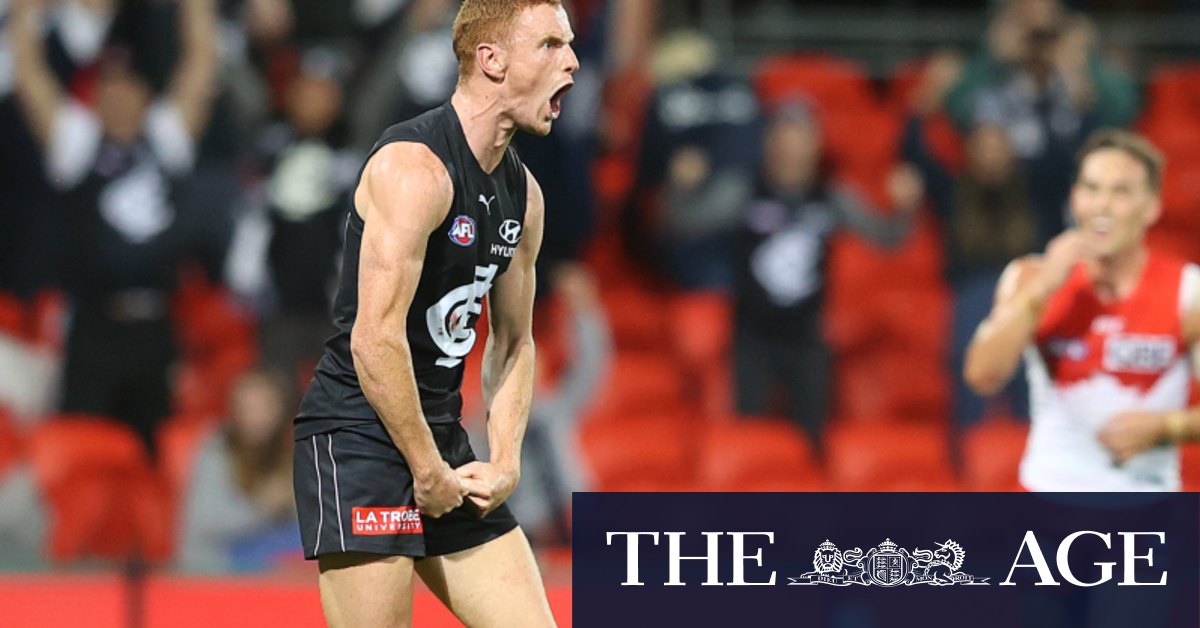 “He is a beautiful kick. To be honest, the mark was the impressive bit. He got up and clunked the mark but he does have a confidence, he has good skills,” Teague said.

“I actually have to admit I felt pretty comfortable with him taking the shot. I think he struck it pretty well. To be honest, he probably didn’t have his best day for us but he stayed in the moment and it’s a great lesson for all our players. It doesn’t matter what’s happened in the past, it’s what has happened in the moment.”

The flame-haired Cottrell was taken by the Blues in the 2018 pre-season supplemental selection period.

“He is a character, as you can see by his celebration. I think his celebration was better than his mark,” co-captain Patrick Cripps said on Fox Footy.

“He brings a lot of energy to our group. I love his story. He was in the pre-season draft, the supplementary draft, and he has got one of the best engines I have seen.”

Cottrell, a product of the Dandenong Stingrays, is the time-trial king at Carlton. His grandfather Len played for the Blues in the 1960s.

The Blues’ efficiency heading into attacking 50 remains an issue but ultimately the weight of 16 more entries proved crucial.

“Obviously, it was a disappointing start … I think this year our boys, particularly when they get behind, they show resilience. We compete hard and, hopefully, we continue to learn and grow from experiences like that,” Teague said.

This was the Blues’ eighth single-digit result of the season, but it could easily have ended in a draw had Lewis Taylor, awarded a questionable free kick against Cripps, not missed a set shot from about 20 metres with 20 seconds remaining.

Cripps said his team believed it could make the finals for the first time since 2013.

“We have grown a lot as a group this year. The last two weeks have been frustrating and we had chances to probably win the games and have a crack at finals. We know we are still a chance but we know it’s important to keep playing our way,” he said.

“We will keep chipping away and try and win the last two and try and build momentum. Hopefully, we can scrape into the finals, otherwise for next year.”

Cripps, who hasn’t had the influence he would have liked this year, had a slow start, but finished with 17 touches and was important in this latest win, coming off stinging defeats to Collingwood and Greater Western Sydney.

Sam Walsh, moved into the centre bounces, had 25 disposals while Lachie Plowman held the dangerous Tom Papley goalless. One concern was forward Mitch McGovern, who was goalless and had only five disposals. Fellow tall forwards Harry McKay (two goals) and Levi Casboult (one goals, six marks) had an impact.

Swans coach John Longmire lamented a lack of inside-50 tackles and the centre-bounce clearance differential in the second term, but there remains much to like about his emerging young group.