Breaking News
Home / Business / The tech stock bubble is deflating, but will it burst?

The tech stock bubble is deflating, but will it burst?

admin September 9, 2020 Business Comments Off on The tech stock bubble is deflating, but will it burst? 38 Views 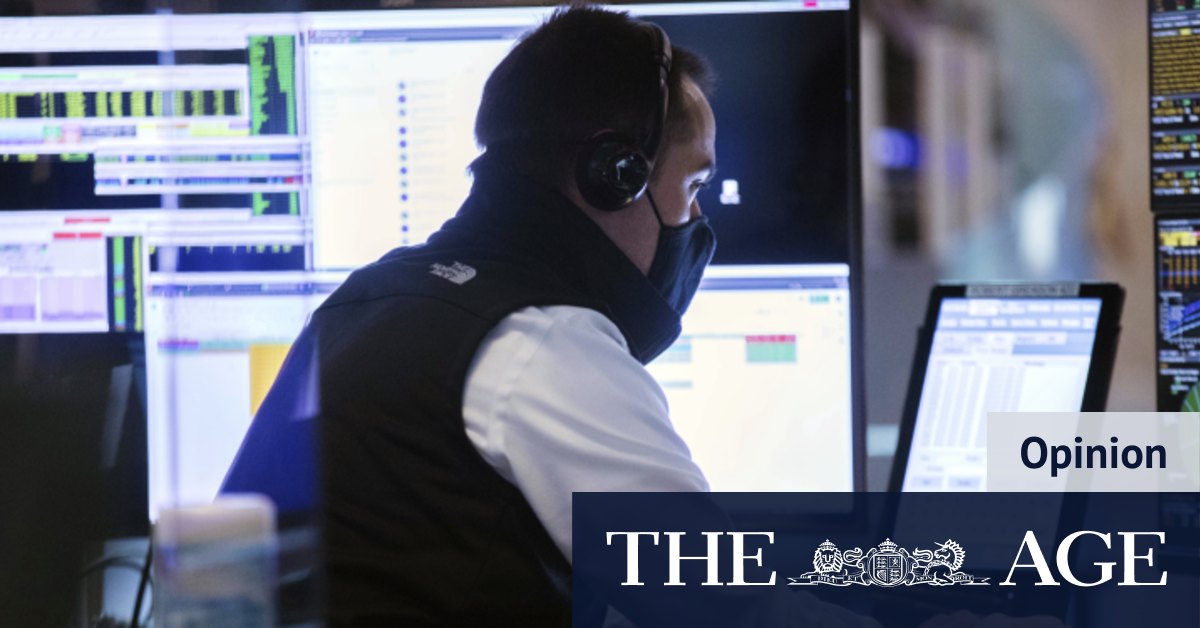 Yet while it was something of a bloodbath for the technology stocks, it does need to be seen in context.

Tech stocks generally had risen nearly 80 per cent since March and the biggest of them – Facebook, Apple, Amazon, Netflix, Microsoft and Tesla – had more than doubled in value. It’s anyone’s guess whether the sell-off evolves into something more than an overdue correction – although, at 54 times earnings for the FAANG+ stocks and more than 60 for the tech sector generally, there is scope for further significant declines.

The resurgence of the US market since March was powered by the six biggest tech stocks, which accounted for more than 25 per cent of Wall Street’s entire market capitalisation before the slump began. The rest of the market had barely moved. That’s an extraordinary degree of concentration, and vulnerability.

Most of the FAANGs have lost about 10 per cent of their value in the sell-off – Tesla is the outlier with about 34 per cent – but are still only back to where they were a few weeks ago and remain as a group at levels nearly double their March low-point.

It’s not really clear why the sell-off started, although there have been revelations that much of the recent surge was due to a massive options play by giant Japanese tech investor, SoftBank, which might have played a part.

SoftBank’s big plunge into the market – and similar very large-scale options activity by inexperienced retail investors using no-cost platforms like Robinhood – had driven the market in tech stocks to levels that, for experienced investors, would have looked unsustainable.

It’s only with hindsight that it becomes clear that a bubble has burst. Corrections and profit-taking during a long bull run confuse the signals.

Tuesday’s sell-off might also have been magnified by Donald Trump’s declaration that he wanted to “decouple” the US economy from China’s – the sharemarket has demonstrated sensitivity to trade issues.

The announcement from AstraZeneca this morning that it has suspended trials of its coronavirus vaccine – regarded as one of the most promising – after a participant experienced a serious adverse reaction will colour Wednesday trading on Wall Street.

The market has been betting on a rapid and strong US economic recovery, predicated on the early release of an effective vaccine and has been consistently buoyed by any signs of progress in their development. The AstraZeneca announcement, while not out of the ordinary in the development of new medical therapies, is the first major setback on that front.

It also undercuts Trump’s hints that a vaccine will be ready ahead of the November election – his “October surprise” – and compounds the impact of Tuesday’s declaration by the major biopharmaceutical companies that they won’t seek federal approval for any vaccine until it has been fully vetted.

None of this augurs well for the market, but this still isn’t the year 2000 with its bursting of the tech bubble.

The big difference is that the handful of big tech stocks that have driven the market during the pandemic are all – even Tesla – profitable, indeed most of them wildly so, and most have actually benefited from the impact of the pandemic on consumer and corporate behaviour.

While one can question the extent to which they were and are valued – Tesla became the world’s most valuable car company even though it makes less than 4 per cent of the cars Toyota produces – there’s no argument that they should be valued more highly than more traditional industrial socks.

A recent Macquarie Bank research report says that in 2011 “new economy” companies accounted for 38 per cent of the profits of companies in the US, but they now generated about 55 per cent, with their share of revenue rising from 29 per cent to 40 per cent over the same period.

Their return on equity is 50 per cent higher than that of old economy companies, their return on assets double, their margins are higher, their pricing power is greater and they are less leveraged.

Those dynamics and their valuations are magnified in a low-rate, low-growth environment.

The tech stocks fit into the “TINA” category. TINA as in There Is No Alternative for investors searching for positive returns.

In the environment we are now in – interest rates close to zero and likely to stay there for years, and economic growth that has been decimated by the pandemic and is likely to stagnate until a vaccine has been developed and distributed globally – the tech stocks fit into the “TINA” category. TINA as in There Is No Alternative for investors searching for positive returns.

That doesn’t mean they are fairly valued, leaving aside theoretical discussions of infinite valuations when risk-free rates are zero or below and risk premiums almost non-existent, but they have been priced for perfection and for being able to sustain that perfection, if not in perpetuity then for the long term.

The experience of very high earnings-multiple priced stocks – and the multiples of the big tech stocks were and are extreme – is that even the slightest of missteps or changes to assumptions sees those multiples unravel and values implode. There’s no risk built into the valuations.

It’s only with hindsight that it becomes clear that a bubble has burst. Corrections and profit-taking during a long bull run confuse the signals. It doesn’t take much, however, for some cautious deflation of an over-bought market to turn into something more severe.

At some point, one suspects, the pricing of the tech stocks will either fall back to more rational levels or tread water while the earnings that validate the prices catch up.

Whether that moment is now, or is yet to come, might become clearer by the end of this week.

Previous Bennett labels Broncos link ‘speculative’ as Johnston signs on at Souths
Next Jockeys did not cooperate with police, says informant in Weir case

‘It’s exhausting’: Return to office will be wobbly, handle with care