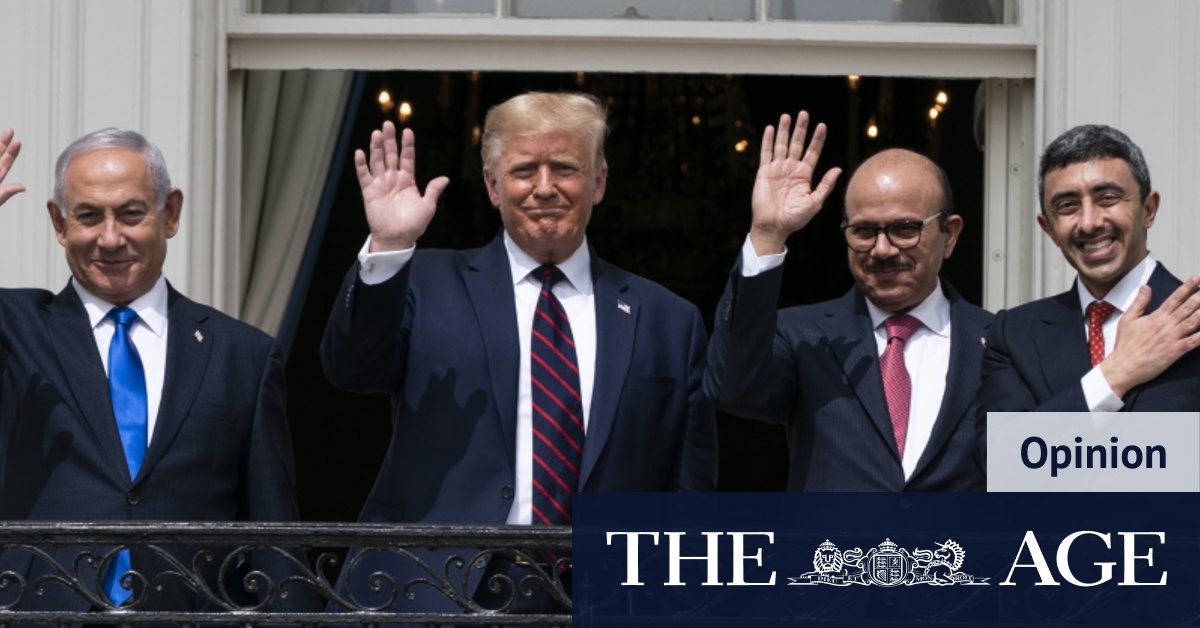 Since the Arab Spring of 2011, the monarchies of the Gulf – and in particular those of Saudi Arabia, the UAE and Bahrain – have moved aggressively to reassert such despotism. Bahrain tried to suck the footballer Hakeem al-Araibi back into its prison system on subversion charges, only to be defied by a brave Aussie campaign to set him free. The UAE and Saudi Arabia financed counter-revolutions in Egypt, Libya and Yemen. They are perfectly comfortable oppressing their own citizens and killing their fellow Arabs in order to maintain their grip on power.

Talk of the “historic” character of recent announced deals between the UAE and Bahrain and Israel needs to be seen against the backdrop of these realities. It also needs to be understood that neither of these new “deals” would be possible without tacit Saudi approval – indeed, they are merely warm-up acts for the day when the murderer of Khashoggi shakes hands with the Israeli prime minister.

The Gulf monarchies never supported the Palestinian cause to make money or gain friends. They did it because when their kingdoms were younger and less influential, and more tied to the fates of their fellow Arabs, they understood that such solidarity was seen by populations throughout the Arab and Muslim world – including their own populations – as the only moral and ethical course. Indeed, as recently as 2002 it was the Saudis who proposed recognition of Israel by all the Arab nations in return for Israel’s withdrawal from the territories it occupied in June 1967 and continues to occupy to this day.

What has changed since then? The 2003 US-led invasion of Iraq gave Iran new power in the region, the Arab Spring with its demand for popular participation in governance shook the Gulf monarchies and the arrival of Mohammed bin Salman with his rogue approach to international relations galvanised some of them in a new direction. When MBS didn’t like the government in Lebanon, he took its prime minister hostage and forced him to read out a resignation letter under duress; when he didn’t like reading criticism of his policies in an American newspaper, he sent a team with a bone saw to Istanbul to fix the problem.

The Bahraini regime has shot more bullets at its own people than it ever has at Israel. The UAE and Saudi Arabia’s war in Yemen has killed more people in five years than Israel has lost in all the wars it has fought since 1948. But these regimes are always looking for help with surveillance and running their security states.

For many years now they have covertly looked to Israel, which in addition to being “the only democracy in the Middle East” also rules over millions of Palestinians who aren’t its citizens in a super-securitised archipelago of checkpoints, jails and besieged towns.

But the Gulf kings have also been courted by Beijing, with Chinese President Xi Jinping offering them ¥1 billion ($200 million) to “build capacity for stability maintenance”. It is not hard to imagine what this means when we look at the situation in Hong Kong or the treatment of the Muslim population in Xinjiang – a population about which the Gulf monarchs, though Muslims themselves, have maintained a studied silence.

Trump makes no secret of his admiration for such “toughness”. When Congress voted across party lines to end support for the Saudis’ sickening war on Yemen, one of the poorest countries in the Middle East, Trump vetoed the bill. He and his son-in-law Jared Kushner know there is plenty of money to be made here, as long as everyone keeps saying the word “peace” now and then.

But Trump can collect as many despots as he likes and stick them in his little scrapbook. This isn’t a Pokemon game – it’s a conflict between Israelis and Palestinians over Palestinians’ basic human rights. Until the voices of those Palestinians are heard and enfranchised, rather than ignored and marginalised while rich men drink to each other’s health, all talk of ass-saving and of historic breakthroughs is premature.

Maher Mughrabi is a senior writer.

Maher Mughrabi is features editor at The Age. From 2014 to 2017, he was foreign editor of The Age and The Sydney Morning Herald.

A range of banks including all big four lenders Commonwealth Bank, Westpac and ANZ are …