Breaking News
Home / Business / ‘Without me, you wouldn’t be here’: Microsoft billionaire’s father dies at 94

‘Without me, you wouldn’t be here’: Microsoft billionaire’s father dies at 94

admin 2 weeks ago Business Comments Off on ‘Without me, you wouldn’t be here’: Microsoft billionaire’s father dies at 94 10 Views 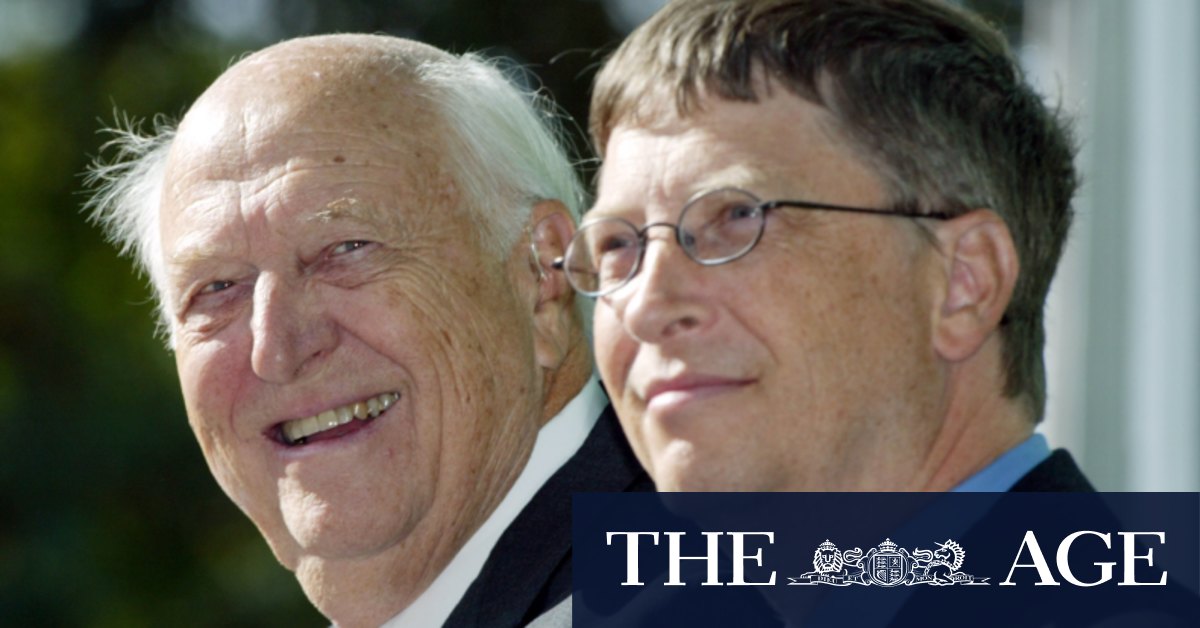 For their earliest philanthropic endeavours in the 1990s, the elder Gates worked from a basement office at home or, as a British newspaper reported, from the vinyl booth of a burger joint where he often ate lunch.

The William H. Gates Foundation, started in 1994 with an initial stock gift of $US94 million, concentrated its giving on global health and community groups in the Pacific Northwest. The elder Gates scanned pleas from the serious to the whimsical. One man suggested funding a ballroom dancing television channel, he wrote in his 2009 memoir, “Showing up for life.”

The elder Gates operated the slide projector at his son’s first keynote address at the Comdex trade show in Las Vegas, in 1983.

In the book, he also recounted getting an appeal from his son and his son’s wife, Melinda. They had learned that many children die each year from illnesses that are rarely fatal in developed countries, such as measles, malaria and diarrhoea. “Dad, maybe we could do something about this?” they wrote.

The foundation, now known as the Bill & Melinda Gates Foundation, has committed more than $US50 billion to expand childhood immunisation, eradicate polio, provide seeds to African farmers and improve American public schools, according to its website. The elder Gates served as one of the foundation’s co-chairs, along with his son and daughter-in-law.

“We have to be helpful to each other or it would be an impossible world,” he said in a May 2009 interview with the Seattle Times. “This is not only good religion but very practical for economy and humanity.”

Earlier, he played a role in the development of Microsoft, the world’s largest software company.

Over dinner in 1980, he helped his son recruit a friend from Harvard University, Steve Ballmer, to work for Microsoft. Ballmer left graduate school and later became chief executive officer of the Redmond, Washington-based company.

The elder Gates operated the slide projector at his son’s first keynote address at the Comdex trade show in Las Vegas, in 1983. “Without me, you wouldn’t be here,” he joked at one meeting of Microsoft employees.

William Henry Gates II was born November 30, 1925, in Bremerton, Washington, an hour’s ferry ride from Seattle. He said in his memoir that he learned his work ethic from his father, who owned a furniture store in a town hit hard by the Great Depression.

With his Boy Scout troop, Gates felled trees and worked two-man crosscut saws to build a lodge in the woods. He became an Eagle Scout.

He enlisted in the US Army during World War II in 1944 and served in Hokkaido, Japan, and Tokyo after the Japanese surrender.

Returning to Seattle, he attended the University of Washington under the GI Bill and received a law degree in 1950. While there he asked a university friend, Mary Maxwell, to set him up with one of her sorority sisters — preferably a tall girl, because he stood 2 metres tall. Mary, at 1.67 metres, stood on her tiptoes and suggested herself, Gates recalled in his memoir.

They married two years later. In addition to the son they called “Trey” — for William III, his name before father and son became simply snr and jnr — the couple had two daughters, Kristianne and Libby.

Their son’s intellectual intensity and headstrong nature at times led to a battle of wills, Gates wrote.

Once, the younger Gates dawdled in his room as the family waited in the car. His mother asked what he was doing. “I’m thinking, mother,” he replied, according to his father’s recollection. “Don’t YOU ever think?”

On another occasion, the future software mogul, then 12, got so nasty with his mother that his father threw a glass of cold water in his face, according to an April 2009 Wall Street Journal article. “Thanks for the shower,” young Gates replied. His parents took him to a counsellor, who advised them to give the youth more freedom.

Later, the young Gates demonstrated his first commercial software, a program to measure traffic that he wrote with his friend Paul Allen, at the kitchen table.

The elder Gates built his law practice at the Seattle firm that became Preston Gates & Ellis LLP, then part of K&L Gates LLP. Among its clients was Microsoft, which Gates’s son founded with Allen in 1975.

Aside from his law work, Gates served as a trustee for more than two dozen Pacific Northwest groups, including the Greater Seattle Chamber of Commerce and King County United Way. In recent years, he was also lent his name to proposals for higher estate and income taxes. Voters rejected a state income tax initiative he supported in 2010.

Mary Gates died of cancer in 1994. The elder Gates married his second wife, Mimi Gardner Gates, the former director of the Seattle Art Museum, in 1996.