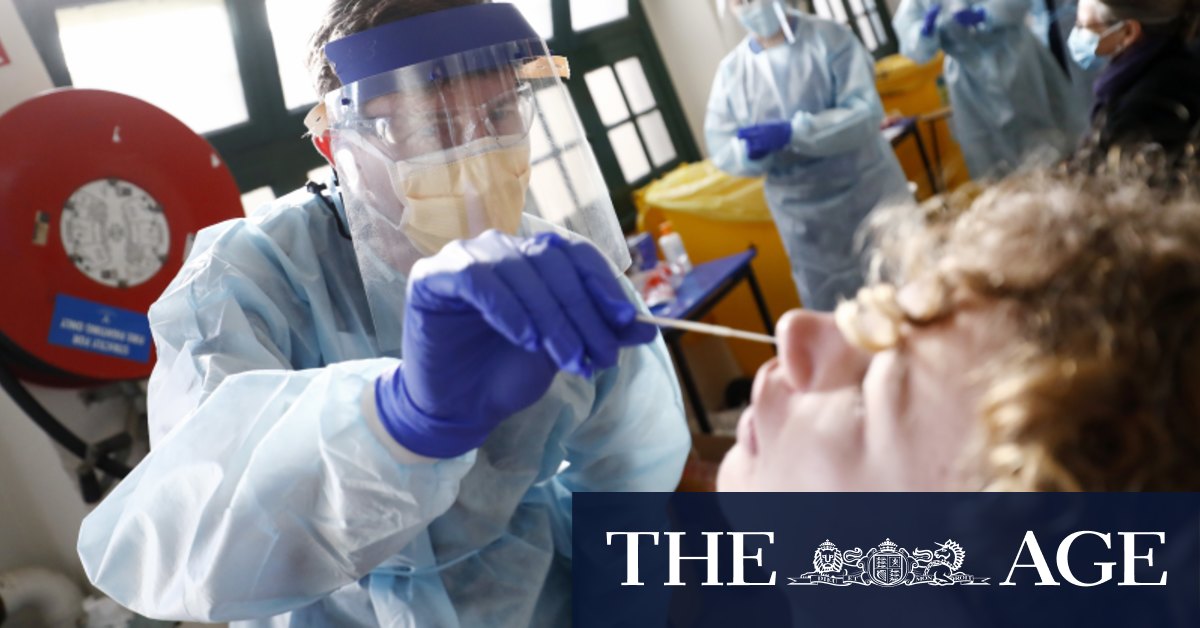 Another eight Victorians have died from the virus, taking the state’s death toll to 745.

Melbourne’s crucial 14-day case average has fallen to 44.4, its lowest level since the height of the second coronavirus wave.

Victorian sessional kindergarten will remain free for most families in the fourth term.
The state government will provide $26.7 million in additional funding for early childhood services set to reopen on October 5.

The government will provide about $500 per enrolled child to community-based, local government and school providers to provide free access to 15 hours of kindergarten per week.

The government will also provide extra funding for cleaning.

“This has been a tough year for all of us – including some of our littlest Victorians. We’ll give some extra help to families and childhood services as our kinder kids [get] back on-site and we take careful steps towards COVID normal,” Mr Andrews said.

Mr Merlino said $4 million would be set aside to help with schooling transition by bringing teachers to kindergartens to engage with children starting school in 2021 as school tours for those children would not be possible this year.

Mr Merlino also confirmed that primary schools in regional Victoria would be able to receive students from October 5 instead of the originally slated start date of October 12, due to regional Victoria’s low numbers.

“They will make a decision about whether they have their preps on the Monday or the great six the Monday but the transition will happen in that first week,” he said.

Mr Merlino said there was no changes to the plans for regional high schools, and no changes from the roadmap plan for metropolitan Melbourne for any schools.

Average down but concern at Casey cluster

Half of today’s 28 cases are linked to known clusters, including five from Casey.

Professor Cheng said there was a number of different households linked to the Casey cluster.

“There’s a number of households they are but we are looking into that and trying to find out where everyone has been so we can make sure the transmission chains are controlled,” he said.

The 14-day average fell below 50 for the first time since the peak of the second surge in cases on Wednesday to 49.6. In its road map to recovery, the state government said restrictions would only start to ease from the end of September in Melbourne if the 14-day average remained between 30 and 50 cases.

The state recorded 42 new cases of coronavirus on Wednesday, but the overall tally of cases only increased by 32 after 10 cases were reclassified due to duplication. Of the new cases reported on Wednesday, 29 were linked to known outbreaks but 13 remain under investigation.

The 463 active cases linked to aged care facilities, which itself is around 50 per cent of total active cases in the state, includes staff members,

That means the overwhelming majority of active cases in aged care are in residents.

Professor Cheng was asked why aged care workers were not all required to wear full PPE (such as gowns, shields and gloves) until there was an outbreak in a facility.

“I would just make the point that a mask and eye protection is the most important part,” he said.

“We often encourage people not to wear gloves… when people wear gloves, often they don’t do hand hygiene properly, and actually it is one of the most important parts.”

The Victorian Premier has batted away questions about his role in consultations with the business sector in the formulation of the state’s roadmap out of restrictions.

“Those matters have been appropriately delegated to the Minister for jobs and industry recovery,” Mr Andrews said.

A reporter put it to the Premier that some business owners were told by ministers that the strategy had been locked in before any consultation had happened with the business community.

“That’s not accurate in any way. There have been detailed consultations [and] we will continue to have consultations, they have informed our decision-making,” Mr Andrews said.

“For instance, if you look at regional Victoria, I think most restaurant is, publicans, cafe owners didn’t expect that there would be able to be 20 patrons inside, they came from feedback as well as detailed public health advice.”

Mr Andrews has asked anyone who does have a permit to travel into regional Victoria for work to be extra vigilant to follow COVID-19 hygiene practices.

He did not elaborate on whether people could go shopping or visit cafes or restaurants while in regional areas for work, but yesterday Victoria Police asked regional hospitality operators not to accept bookings or visits from those from metropolitan Melbourne.

In regional Victoria, residents can now have visitors to their homes, restaurants and cafes can have seated indoor and outdoor dining, beauty services can reopen and people can gather in groups of 10 outside.

Geelong residents were enjoying brunch at cafes for the first time in weeks on Thursday morning.

“It’s a great day for regional Victoria and for the hospitality industry – we’re open at long last with restrictions,” he told the Today show.

“We really feel for Melbourne people – we just hope they abide by the rules.”

In an effort to stop Melburnians travelling to regional Victoria, police checkpoints have been beefed-up.

Police and Australian Defence Force personnel were stopping every single car and truck at the Nar Nar Goon checkpoint near Pakenham on Melbourne’s eastern outskirts on Thursday morning.

Melburnians face an almost $5000 fine for trying to travel to the country without a valid reason.

Deputy Commissioner of regional operations Rick Nugent announced the new $4957 fine on Tuesday for “failure to comply with a requirement to remain in a restricted area”.

The fine will apply to every person found in a group travelling. For example, a couple travelling would each receive a $4957 fine and be sent home.

Previous Montefilia an athlete ready to take flight in the spring
Next Second coronavirus lockdown would be ‘disastrous’, Johnson warns