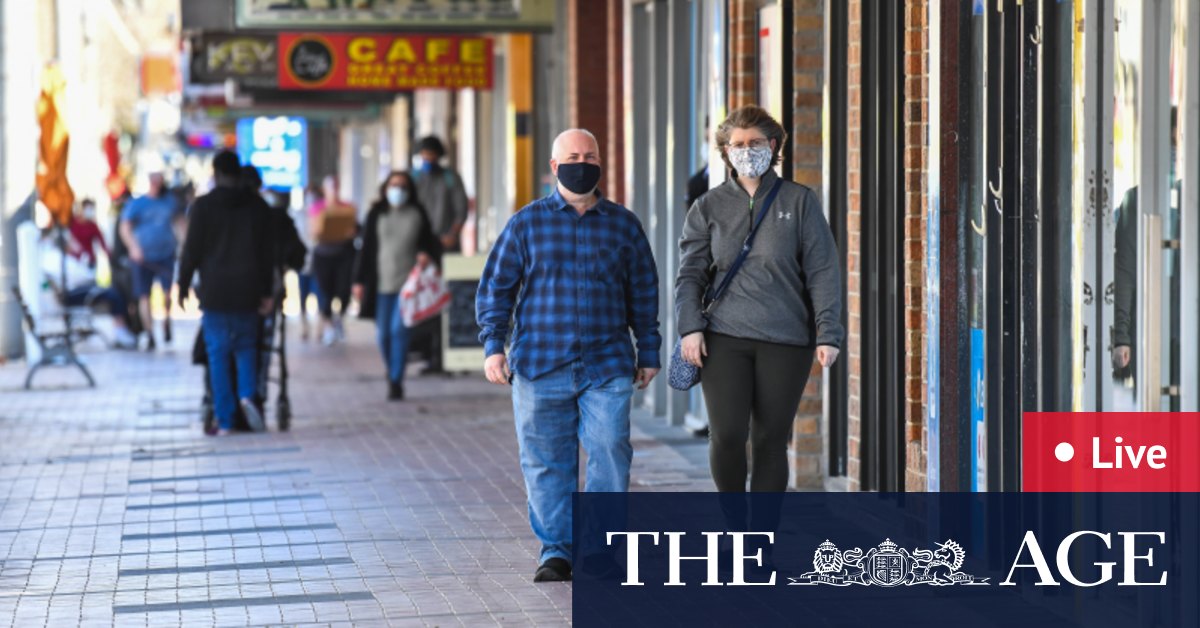 Victorian Premier Daniel Andrews has stepped up for his daily press conference (you can watch it live in the pinned post at the top of this blog).

As we reported earlier, 15 new cases of COVID-19 have been recorded in the state over the past 24 hours and sadly five additional deaths.

Of those 15 new cases, 10 are linked with known outbreaks and five are still under investigation.

A total of 15,741 tests were processed yesterday.

The total number of active cases in the state has dropped to 554 from 620 yesterday.

There are now only 14 active cases left in regional Victoria.

There are currently four active cases linked to disability settings, no change from yesterday.

As reported earlier the rolling 14-day average for Melbourne is 29.4, and 1.1 in regional Victoria.
The number of “mystery” cases in the past 14 days is 41.

A global survey of more than 10,000 people in 38 countries suggests the COVID-19 pandemic has disrupted women’s lives significantly more than men’s.

According to CARE Australia, the charity which conducted the survey, women were more likely to have lost their incomes and be skipping meals in order to feed their families.

Women were almost three times more likely than men to report rising stress, anxiety and other mental health issues, which many attributed to the increased demands of childcare during school closures.

“The COVID-19 crisis risks undoing the significant gains lower-income countries have made over the last decade in terms of lifting people out of poverty and creating more equal societies for women and men,” said CARE Australia chief executive Peter Walton.

Seven people attending “going away drinks” at an apartment were among 83 people fined over the past 24 hours in Victoria for breaching COVID-19 restrictions.

All seven people received individual $1652 fines for the shindig.

Four other people, none of whom lived together, were found in a car in a sports centre car park in Dandenong and were also fined.

Of the 83 total fines, eight were for failure to wear a face mask, seven at vehicle checkpoint and 20 for curfew breaches.

Anyone who shopped at Melton Woolworths in Coburns Central Shopping Centre on September 16 and 17 should be monitoring closely for any symptoms of COVID-19.

The same advice has been issued for anyone who shopped at Niddrie Woolworths at the Central Shopping Centre on Keilor Road on September 18.

Anyone who attended any of the locations in the above table on the date listed should get tested immediately if they develop even minor cold or flu symptoms.

The crisis in aged care homes as a result of the COVID-19 pandemic has left many families worried about the safety of their relatives who live in these facilities.

If you are planning to permanently remove a family member from aged care to live at home, we would like to hear from you.

Queensland’s Deputy Premier Steven Miles has accused Prime Minister Scott Morrison of using the nation’s defence force as a “ bargaining chip” to pressure the state into reopening its borders.

The Australian Defence Force is in talks to pull troops from border checkpoints as more domestic travel restrictions are eased.

“It’s no secret, I think, that the Prime Minister doesn’t like our strong border protections,” Mr Miles said.

“His withdrawal of the support of the defence force is disappointing, it will make the job of our police even harder.

“I really don’t think the defence force should be used as a bargaining chip in what is an ongoing political attack from the federal government.

“Our policies have worked and they should back off.”

Although the easing of restrictions will go further this Sunday than first planned, Premier Daniel Andrews isn’t budging on when the 9pm-5am curfew will be lifted for Melbourne.

Currently, according to the government’s road map, curfew won’t lift until October 26 along with the five-kilometre radius rule.

The validity of the curfew has been under scrutiny over the past few weeks, with legal action challenging the rule now underway in the Supreme Court.

“I have no announcements to make about the curfew,” Mr Andrews said.

“Curfew provides police with an easily enforceable rule. It means fewer people going visiting friends and accordingly, it will be in place for as long as it needs to be in place to get these numbers down and keep them down.

“It won’t be there forever.

“It’s there while it serves a useful purpose, to make sure that people are not out and about and it gets into a situation where Victoria Police have to have interminable lengthy discussions with people having all sorts of manifestly incorrect false statements about where they were going.

“You’ve either got a reason to be out or you don’t and the curfew makes that easier to enforce. “

NSW has seen a second consecutive day without local coronavirus cases. The state recorded six new cases in the latest 24-hour reporting period, all in its hotel quarantine program.

Chief Health Officer Kerry Chant said she was “very pleased to give a shorter report today” at a press conference in Sydney this morning.

“The last [case with an] unknown source of infection, was on September 7,” Dr Chant said.

“So whilst we have had cases reported, recently we have been able to identify the source of those.”

She added that this week’s figures were “very pleasing, but it is no time for complacency”.

The last time NSW had consecutive days without community transmission was on July 3, 4, and 5.
NSW recorded 16,759 tests during the reporting period. Premier Gladys Berejiklian said she would like to see that figure higher.

“We know that there are still a number of risks in NSW including the high likelihood that the virus is circulating – especially in western and south-western Sydney – undetected, which is why we really need to make sure everybody who has the mildest of symptoms comes forward and gets tested.”

The new cases bring the state’s case total to 4023.

Victorian Premier Daniel Andrews has indicated his government is open to negotiate the details of a controversial new law to detain people considered a high risk of negligently spreading COVID-19.

People suspected by health authorities of being likely to spread the virus if they are COVID-positive or a close contact of an infected person could be forcibly detained if the bill is passed.

The rules could be applied to conspiracy theorists who refuse to self-isolate or severely drug-affected or mentally impaired people who do not have the capacity to quarantine.

The body representing Victoria’s barristers has written to the Andrews government to warn that proposed laws to detain potential spreaders of coronavirus could breach the state’s human rights charter and allow citizens to be placed in arbitrary detention.

The letter from Victorian Bar president Wendy Harris, QC, to Attorney-General Jill Hennessy outlined the organisation’s concerns with the Omnibus (Emergency Measures) Bill, which would hand power to Health Department-appointed authorised officers to detain anyone they “reasonably believe” may negligently spread the virus.

Mr Andrews said discussions were underway with the crossbench to try to get support to have the bills passed but defended the intention behind the proposed law.

“They’re based on a reasonable belief principle and proportionality principle about the
risk of spreading COVID,” he said.

“There are some people who are not compliant, refuse to act in a responsible and safe way. Those powers would not be frequently used. They would be, I think, rare. But they are important.

“We wouldn’t take these steps if we didn’t believe they were proportionate to the challenge we face. We are in unprecedented times.”

Victoria’s coronavirus numbers are ahead of where the government expected them to be but authorities need to be hyper-aware of the risk of super spreaders, Premier Daniel Andrews has said.

The Deputy Chief Health Officer Allen Cheng confirmed that about 20 per cent of Victoria’s COVID-19 cases were responsible for 80 per cent of infections in what are called “super spreader” events.

Mr Andrews said the passage of time was crucial to making calls about easing.

“Logic tells you that not everybody who has symptoms tomorrow gets tested. There will be more out there than the case numbers I’ll report every day. The question is ‘are they a good proxy for what’s out there?’,” he said.

“At this stage, we believe they are, but we’d always reserve the right to have further days pass before making decisions.

“One person who happened to find themselves and spend time in some unfortunate locations where they were mingling and mixing with quite a lot of people, otherwise known as the place being opened up, that’s when you can have not one to 30, but five or six become 300 or 400. That’s the really challenging part about it.”