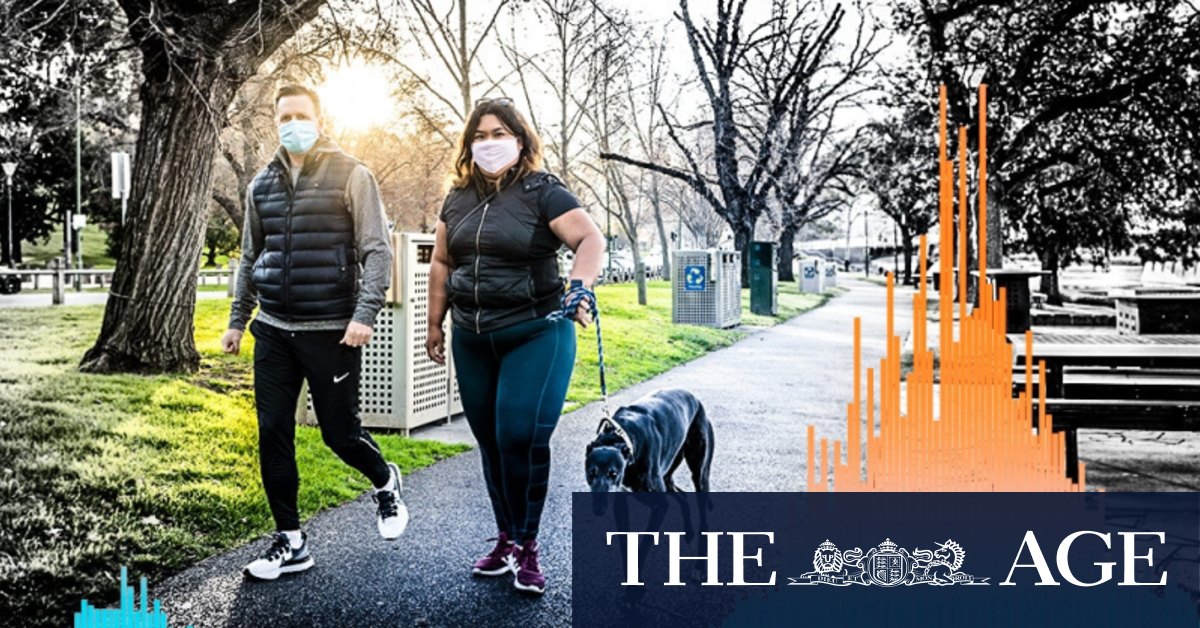 Changes that will take effect from 11.59pm on Sunday:

Melbourne’s night-time curfew will be lifted from 5am on Monday.

Mr Andrews said a new fine of $5000 would be instated for those having unlawful outdoor or indoor gatherings.

He said it “mirrors the announcement” made around fines for those from metropolitan Melbourne trying to leave to regional Victoria without a lawful reason.

“So we are at least a week ahead of schedule,” Mr Andrews said, “but we must wait and see how things unfold over the next three weeks and then make those decisions and speak about likely time frames in November.

“If you are having a party at your house that is unlawful, that puts everything at risk.

“I can’t make it any clearer how serious this is. We are so close, so, so, close to beating this thing and it is just not appropriate to be going and visiting friends or to be gathering in car parks.”

Professor Brett Sutton said the decision to scrap metropolitan Melbourne’s curfew was a recommendation from his public health team.

The Chief Health Officer said with 15 of today’s 16 new cases connected to outbreak or clusters, Victoria was now in a “different situation” to where it had been in previous weeks during the pandemic.

Professor Sutton said now the curfew was not a “proportionate measure to have in place”, when considering the Public Health and Wellbeing Act.

“We always said that aged care cases would be a stubborn tale of this epidemic curve. That remains the case but it does mean that not insignificant proportion of our daily cases are in aged care and the curfew doesn’t address that transmission risk, obviously,” he said.

“Over the course of the last couple of weeks, we have talked about 21 mystery cases but really we are getting to one to three community cases per day.”

The five-kilometre bubble on movement will remain in place.

“Limiting movement limits the spread of this virus and keeping people into their local community is very important,” Mr Andrews said.

“[It] won’t be there longer than it needs. But it’s not safe for us to take that off now.”

Mandatory mask-wearing will remain for the long term – and the rules have changed.

Victorians will now be required to wear a fitted face mask, covering the nose and mouth.

Scarves, bandannas and face shields on their own will no longer be permitted.

“As I’ve said before, wearing a face covering is a small sacrifice – but it makes a huge difference in keeping all of us safe. Because fundamentally, that’s what all of this comes down to,” Mr Andrews said.

Pupils in prep to grade six, special school students and VCE and VCAL students will return to on-site learning in the week of October 12.

Mr Andrews said Melbourne was now “ahead of schedule” and the change was “great news” for parents and carers.

“I stress that it won’t necessarily be every student in every year level on the one day, it may be staggered throughout the week that in that week beginning 12 October,” he said.

Childcare will also be open for all children, and one babysitter – whether paid or unpaid – can now enter the home to care for children.

“This is not to say that they can’t get infected or they never get unwell but their risk is lower and it is particularly important when community rates of infection are low, as they are at the moment,” he said.

“This new modelling suggests suggest relatively safe to return students to primary schools in the first weeks of term four.”

Since the beginning of the pandemic, there have been 139 staff and 373 students infected across the state.

Workforce limits for some industries will also be expanded allowing about 127,000 employees to return to work.

Supermarkets and food distribution centres will return to full capacity, while abattoirs, seafood and meat processing plants will also increase.

Manufacturing will also return with up to 90 per cent of its workforce.

Sole gardeners and landscapers can return to work, while retail pet grooming can also resume.

The changes announced on Sunday include metropolitan Melbourne’s meat producers will be able to have 80 per cent of their workforce return, with poultry going to 90 per cent.

Supermarket distribution staff numbers will return to almost normal, but will have to follow COVID-safe plans.

The changes to workplaces will come into place at 11.59pm on Sunday.

Mr Andrews said that, after discussion with the public health team, sole traders like outdoor garden stockists will not be able to work in teams.

“I asked the public health team to specifically consider this notion and potentially a ‘bubble’ type arrangement where two people can work together to the exclusion of others, and that was deemed not safe … If we can change that as soon as we can change that we will,” he said.

“With spring lamb, calving and other seasonal factors, not to mention that Christmas is coming … we are pleased to be able to lift those percentages of workers,” he said.

Australia Post’s distribution network is also expected to be boosted back to almost full numbers of staff.

Non-urgent services at dental practices will resume, with a shake up on rules around visits to hospitals.

Hospital patients can have one visitor per day for a maximum of two hours, with children under 18 in hospital able to have two parents or carers visit with no time limit.

“That is a significant shift and it is a recognition that at times of great stress it is really important to be able to be as close to loved ones as is safe,” Mr Andrews said.

Mr Andrews said while it was a broad rule, it was likely that “vulnerable” settings like intensive care units, may have bespoke arrangements.

Metropolitan Melbourne’s daily average over 14 days is now at 22.1, with 31 cases having an unknown source between September 11 and 24. Regional Victoria’s 14-day rolling average is at 0.6.

Melbourne’s 14-day rolling average is now well under 30 to 50 daily cases, which was the threshold required to trigger the announcement of changes to COVID-19 restrictions on Sunday.

Under the current road map to recovery, childcare centres will now be able to reopen to all families without the need for a permit, more school students will return to classrooms and up to five people from two different households will be allowed to gather in public places.

The eased restrictions come after the resignation of former health minister Jenny Mikakos on Saturday morning, who said in a statement posted on Twitter she was “disappointed that my integrity has sought to be undermined”.

The resignation came after the Premier gave evidence to the hotel quarantine inquiry on Friday that it was Ms Mikakos’ department that was “primarily responsible for the program”.

There were 12 new virus cases announced in Victoria on Saturday, with three of those positive cases linked to aged care homes.