The likelihood of Dan Andrews resigning is slim indeed 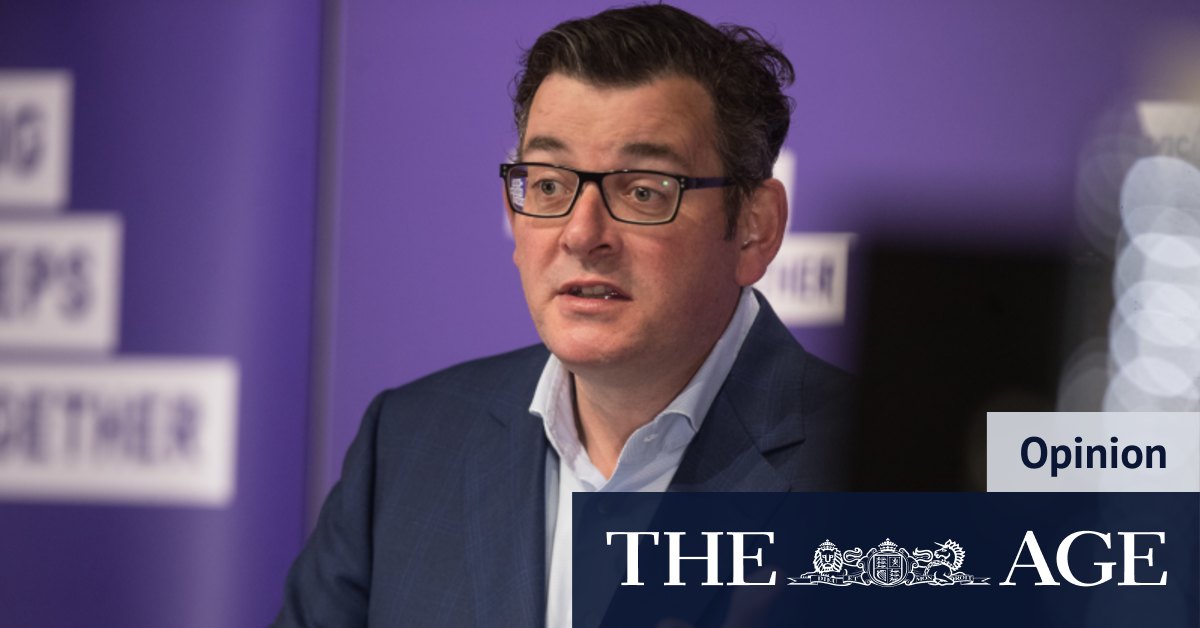 Following graduation from Monash University where he majored in politics, Andrews became an electorate officer and factional enforcer for federal Labor MP Alan Griffin, before stints as an organiser and then assistant state secretary for the Victorian ALP. In November 2002, aged 30, he won a seat in the Legislative Assembly. He was immediately appointed as a parliamentary secretary in the second Steve Bracks-led Labor government.

Four years later, Andrews was promoted to the ministry and, after the ALP lost office in November 2010, he was elected opposition leader. By age 42, he was premier of Victoria.

One of the perversities of the modern party apparatchik scheming their way into parliamentary office from a tender age is that, once there, they commonly lack the wherewithal to meaningfully exercise power. They resemble a dog that chases and catches the truck. It is as if they have spent too much time obsessing about the object of their ambition at the expense of bothering to understand its purpose.

Andrews is different. Early this year, I attended the memorial service for the former Labor premier John Cain, who presided over a period of watershed reform in Victoria in the 1980s. A story Andrews chose to tell about Cain said as much about him as it did about the late premier. He recalled that Cain rang him on the eve of the November 2014 state election with Andrews poised to win government. An emotional Cain impressed on Andrews the opportunities of office and implored him not to waste a day of power.

If his own instincts to leave an imprint on the state and Cain’s urgings weren’t enough, Andrews had another reason to be an activist premier. The Liberal-National government Labor defeated in 2014 had mostly seemed becalmed during its single term in office, exacerbating the state’s infrastructure shortfall and squandering the goodwill of an impatient, fast-growing Victorian community.

It was a very different scenario from the last time Labor had won power from opposition in 1999, when Steve Bracks surprisingly triumphed over Jeff Kennett. Then, the imperative had been for a period of healing and consensus following Kennett’s steamroller leadership. The amiable and cautious Bracks was perfectly attuned to that need, but some problems were put in the too-hard basket. Eventually, time ran out for Bracks’ successor, John Brumby, not least because of discontent with Melbourne’s overstretched public transport system.

Andrews, by contrast, styled himself as an assertive premier from the moment he took office. This was exemplified by an ambitious infrastructure building agenda: signature policies were a major program of level-crossing removals and the Metro tunnel rail project.

Belying his buttoned-up Clark Kent-like exterior, but also confident that Victoria was more receptive to bold social reform than other parts of the nation, his government made Victoria the first Australian state to legalise voluntary assisted dying, established the state’s first drug-injecting room, firmly supported the Safe Schools program, appointed the Royal Commission into Family Violence, and embarked on negotiating a treaty with the Indigenous community.

Andrews the earnest reformer coexists with a powerful streak of the political hard man. He demonstrated a willingness to barge through controversies unapologetically (whether cancelling the contract for the East West Link project, the prolonged dispute over reforming the Country Fire Authority, or revelations about Labor’s deployment of taxpayer-funded electoral staff in its 2014 election campaign — the so-called “red shirts” affair).

Similarly, Andrews seemed to derive satisfaction and affirmation in provoking critics. He thumbed his nose at Melbourne’s top-rating commercial talkback radio host, Neil Mitchell, and appeared unfazed at earning the enmity of the state’s News Corp tabloid, the Herald Sun.

The formula worked. Despite vociferous attacks by the Herald Sun but aided by a tin-ear law-and-order campaign by the Liberal opposition, which jarred in a community defined by complexity and diversity, the Andrews government was triumphantly returned in November 2018. The victory was so comprehensive that it was dubbed the “Danslide”.

Former Liberal prime minister John Howard sought to console devastated Victorian Liberals by christening the state the “Massachusetts of Australia”. Yet in a review of the election for the Victorian Liberal Party, Howard’s former principal adviser, Tony Nutt, acknowledged the effectiveness of Andrews’ leadership over the previous four years. In private circles, Liberals conceded he was one of the most formidable politicians of the generation.

When Andrews so emphatically won a second term, I wrote that a potential danger was that, emboldened, he might grow too domineering.

That, of course, was long before the COVID-19 pandemic dramatically impacted the political landscape. Early in the crisis, Andrews’ decisive style appeared ideally equipped for the challenge. As head of one of the senior states, he had an influential presence in Morrison’s specially formed national cabinet.

In common with his fellow leaders, Andrews’ management of the first wave of the virus won strong public endorsement. In late April, Newspoll recorded him enjoying an approval rating of 75 per cent, with 85 per cent of respondents believing he had handled the pandemic well.

Then came the botched hotel quarantine program, the unleashing of a second wave of the virus and the imposition of strict restrictions on Victorians in early July. For Andrews, who has prided himself on his control of his government and mastery of detail, it has no doubt been a humbling experience.

He has responded in perhaps the only way he knows how: by asserting still tighter hold over his government and upping an already onerous workload. Day in and day out for the past three months, he has fronted a media conference to announce the latest COVID numbers, exhausting the questions of a frequently hostile journalist pack.

Any semblance of bipartisanship over the management of the virus disintegrated. The state opposition and Morrison government ministers have roundly condemned Andrews.

Predictably, the News Corp press has been especially strident. They resent what they regard as Andrews’ ideological adventurism and also seem actuated by revenge for the 2018 election result.

The legitimate criticisms that can be made of his government for its defective co-ordination, lack of accountability and occasionally tactless overreach have been overshadowed in their pages by hyperbolic columns depicting Victoria as a kind of failed state in which “Dictator Dan” tramples civil liberties. One wonders how many of these columnists have actually walked the streets of Melbourne during the lockdown: the public hardly gives the impression of being cowered under the jackboot of a police state.

Last week, through gritted teeth, The Australian reported the results of a Newspoll that indicated support for Andrews was holding up in Victoria. His approval rating was 62 per cent. Two-thirds of those surveyed believed his government was doing well in handling COVID-19.

What this suggests is that the shrillest voices of criticism are not representative of public opinion at large. The public stoically accepts the restrictions and also has a sense of proportion about what has happened in Victoria when compared to the severity of the crisis in many other countries.

Even as the second wave of the virus is contained, the challenges for Andrews are many. Like his counterparts federally and in the other states, the premier’s destiny will likely be determined by how dire the economic reckoning is and how effectively his government handles the task of recovery.

Andrews may also need to moderate his leadership approach. Crises have a habit of leaving a legacy of centralised authority in governments – think of Kevin Rudd’s federal Labor government and the GFC – but monopolising too much power is ultimately neither sustainable nor wise for any leader. Unless tempered, his ruthlessness, most recently displayed by publicly cutting adrift Health Minister Jenny Mikakos, risks eventually seeding an internal revolt.

There are some predictions a wounded Andrews, emulating what Bracks did in 2007, will resign the premiership before the next state election. I’m unpersuaded. There are amends to be made and to walk away now would be tantamount to conceding to his detractors.

Besides, relinquishing power would go against the grain.

Paul Strangio is Associate Professor of Politics at Monash University. This article originally appeared on The Conversation.

Previous ‘We make things in Australia’: PM’s plan to boost manufacturing
Next US to widen inquiry into AstraZeneca COVID vaccine destined for Australia