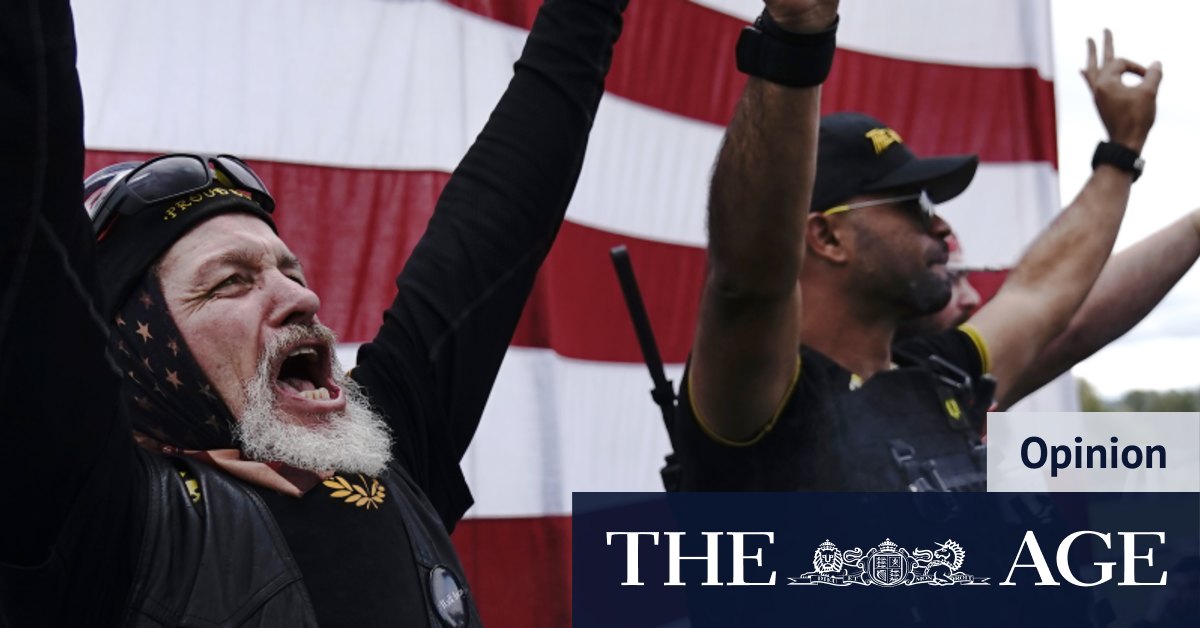 The news on Friday that Trump has coronavirus will make the debate, to many, seem so last week. Yet the most shocking aspect of the debate – the President’s refusal to disavow white supremacy – will be an enduring moment in this presidential race. So many outrages pour out of Trump’s mouth, and Twitter account, on a daily basis that it is easy to become desensitised to them. But this stood out for its sheer horror, particularly at a moment when the US is riven by racist division and anger.

“What do you want me to call them?” the President asked, sneering. “The Proud Boys,” Biden offered, naming one of the prominent far-right groups. “Proud Boys, stand back and stand by,” Trump responded.

Soon after the Proud Boys worked that statement into a rallying-cry meme posted on the internet under their banner. Trump’s message was a thinly veiled call to arms, and it took them a minute to snap their boots to attention.

The Proud Boys are a proudly patriarchal, far-right, Western chauvinist group. The FBI has designated them as an extremist organisation. One of their former members was the organiser of the 2017 far-right, neo-Nazi-infused Charlottesville rally, which attracted counter-protesters who were then rammed with a car by a white supremacist named James Alex-Fields Jr. One young woman was killed and dozens others injured. Trump famously said there were “very fine people on both sides” at that rally.

In 2018, Proud Boys’ founder Gavin McInnes had his visa application to visit Australia blocked after a petition to stop him entering, launched by lawyer Nyadol Nyuon, garnered about 80,000 signatures. McInnes had been planning a speaking tour dubbed a “Deplorables Tour”. Also on the ticket was Tommy Robinson, British founder of the far-right, anti-Muslim English Defence League. McInnes was judged to be of bad character and had his Australian visa application declined on those grounds.

Australia made the right choice and acted to protect our politics from being infected by the violent rhetoric someone like McInnes threatened to bring here. But far-right politics cannot always be so easily stopped at the border, even if it does not involve the same violent calls to arms in the Australian context.

In 2018 Coalition senators voted for a motion moved by One Nation leader Pauline Hanson calling for the Senate to acknowledge that “it’s okay to be white” – a phrase popularised by white supremacists. (Prime Minister Scott Morrison said the Coalition’s support for the motion was “regrettable”.)

Senator Fraser Anning used his first speech to propose a “final solution” to “the immigration problem”, and was condemned by all sides of politics. Anning later said his remarks had “nothing to do with” the Nazi party’s final solution, which described the genocidal policy of exterminating Jewish people. Even before he was sworn into the Senate, Anning quit his party of One Nation, sitting as an Independent for a while before joining Katter’s Australian Party, from which he was expelled for his statements against “non-European” immigration.

After the Christchurch mosque massacre in 2018, Anning blamed the attack on Muslim immigration. Prime Minister Scott Morrison condemned the comments as “disgusting” and said the views “have no place in Australia, let alone the Australian Parliament”.

Last week came the bizarre news that Anning has joined forces with former Trump campaign strategist Steve Bannon, the man who harnessed a far-right portfolio of groups to power Trump to victory in 2016. According to a Twitter announcement, they founded something called the Institute for Populist Economic Nationalism. It was a full circle that showed the close links between our political fringe and the centre of hate-based politics, American-style.

In March this year, the Australian Security Intelligence Organisation director-general, Mike Burgess, told Senate Estimates there had been a marked increase in far-right extremism in Australia in recent years, but ASIO was at a loss to understand why. “In the last three years, we’ve seen a rise in activity and strengthening and there’s a few trends there but we do not fully understand why this is occurring,” Burgess said.

We are lucky in this country to have broadly centrist politics, populated, for the most part, by people who genuinely want to contribute to Australian society and improve the lot of Australians. But we must never kid ourselves that we are immune to the cancer that is eating at American democracy.

We should watch Trump, through our fingers in horror if necessary, and commit ourselves anew to never letting the deliberate fomentation of hatred happen here.

Previous After a long and locked down winter, can we find a way to celebrate grand final day?
Next Economists reveal their ‘dream budget’ to save the Australian economy