Deer euthanised, another at large after running wild in Sydney’s inner west

admin 3 weeks ago Latest News Comments Off on Deer euthanised, another at large after running wild in Sydney’s inner west 19 Views 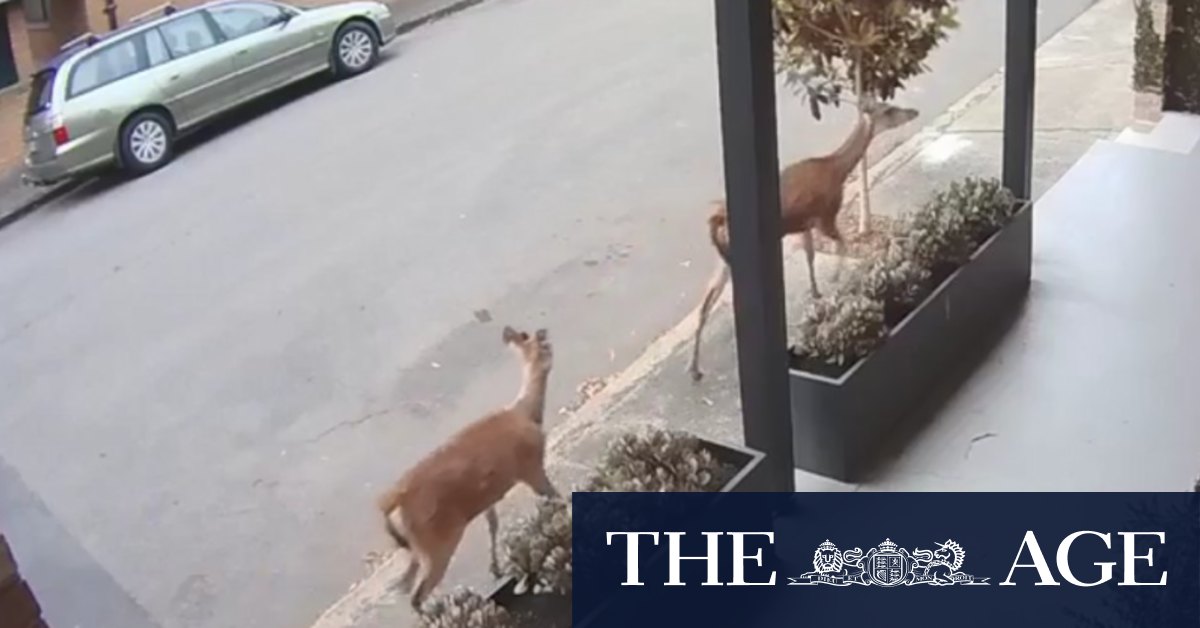 By 11am, one of the deer had been contained by a member of the public on Derbyshire Road. The whereabouts of the other deer remains unknown.

Inner West Council mayor Darcy Byrne said the lone deer had been contained in the backyard of a unit complex.

“[It was] apparently bashing itself up against a fence to get out, so it’s a pretty strange occurrence, I must say, in one of the most urban environments in Australia,” he told Deborah Knight on 2GB.

A spokeswoman for the RSPCA said the deer was contained by police and sedated by RSPCA inspectors upon their arrival. It was then taken to Sydney Shelter for assessment.

“The deer was assessed by veterinary staff and found to be in poor health and humanely euthanised,” the spokeswoman said.

Cr Byrne said RSPCA and police were “working very hard” to locate the second deer. “Hopefully they can catch that one safely,” he said, adding he could not “begin to imagine how two deer found their way to the mean streets of Leichhardt”.

“I note they’ve only been sighted so far in Balmain, Annandale and Leichhardt, so they’re smart enough not to have tried to cross Parramatta Road,” he said.

The RSPCA spokeswoman urged the public not to make any attempts to approach or capture the second deer, but to report any sightings to the RSPCA.

“Feral deer in NSW are declared game animals under the Game and Feral Animal Control Act 2002 but are managed as pest animals where they are causing harmful impacts,” she said.

Cafe owner Dennis Dordevic saw the deer about 6am near the fence of Sydney Secondary College Leichhardt,while he was on his way to work at Brew Ha Ha Coffee Roasters at Lilyfield.

“They were just moving around the fence there, and I wake up at 4am to roast coffee, so I thought maybe I was seeing things,” he said.

Mr Dordevic said he turned his car around to see if there was a way he could help the animals, but by the time he returned to the site, a group of people had done the same, and the animals were spooked.

“The cars had startled them,” he said.

A poster on the Leichhardt Community Group Facebook page said they saw the animals running down Mackenzie Street on Tuesday morning.

“Thought I was imagining it, but ran into another dog walker who saw them too,” they wrote on the page.

Police did not know where they had come from or who they might belong to. “We don’t know if it’s Donner or Vixen or Dancer or Prancer,” a NSW Police spokesperson said, referring to some of Santa Claus’ reindeer.

An Inner West Council spokeswoman said there had been one previous report of deer in the local government area but that report was never substantiated as the deer could not be located.

Previous Could e-scooters be the answer to impending COVID-19 gridlock?
Next How about timed tickets to the beach? More creativity needed so Sydney can enjoy a COVID-safe summer