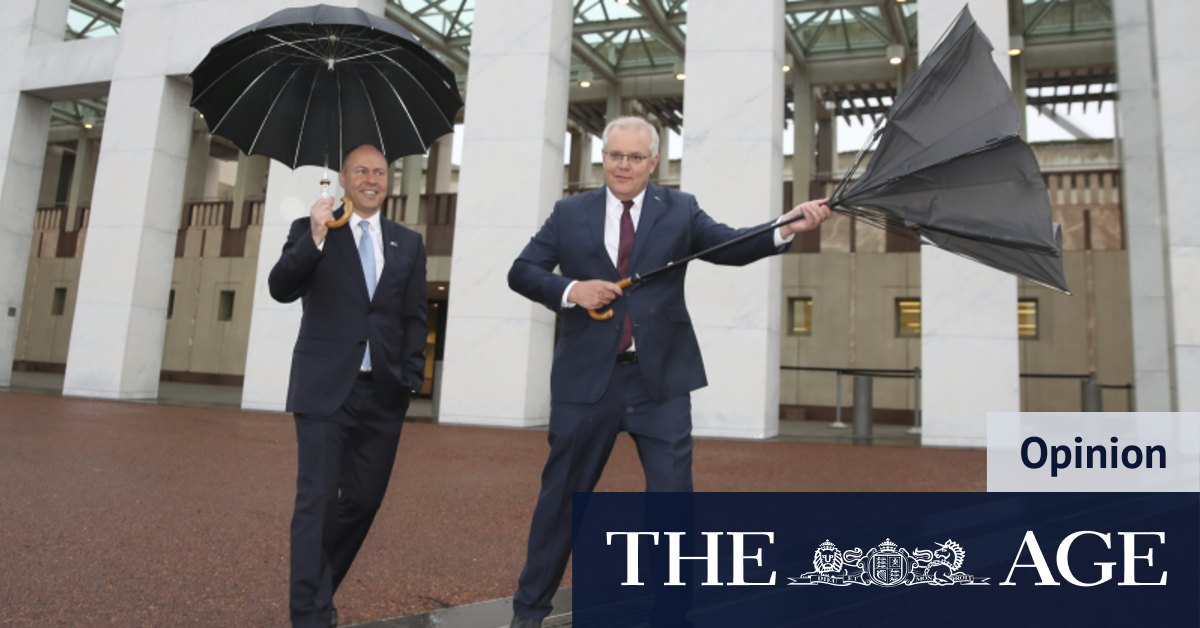 Tax cuts are the hero of the piece. Whether in the form of concessions that allow businesses to claim deductions for just about everything they spend, or the cuts to individual income tax, the government’s giving up a lot of money here, and it’s a major contributor to the deficit.

The stated aim is to kickstart the economy by giving money to businesses who will employ people, and to individuals who will spend it. And that is a very Coalition idea. It has underwritten every tax cut the Coalition has argued for, successfully or otherwise. It was the theory behind the company tax cuts it eventually abandoned, for example.

It’s not wrong, necessarily. Especially, as in this case, when the personal tax cuts include those on $45,000 per year. Treasurer Josh Frydenberg made a point of this, saying the cuts were designed specifically to go to people who would be more likely to spend it – that is, people who don’t earn much.

Hence the much-vaunted focus on low-to-middle income earners. But be careful, here. The upper end of these tax cuts reaches to the top 12 per cent of taxpayers. The Age interviewed an audiologist this week who was excited about the tax cuts because they provide “an opportunity to catch up on the savings we were trying to accomplish”.

That sounds like the opposite of what the Treasurer wants, and I can’t imagine it’s an isolated case.

Meanwhile, the government plans to reduce JobSeeker back to poverty level.

This despite a rare, long-running consensus from the Business Council of Australia and the social services sector that it has to increase.

This despite the fact that John Howard – who froze unemployment benefits throughout his premiership – concedes that freeze has probably gone on too long.

And this despite the fact that if anyone will spend whatever extra money they get, it is these people.

On the face of it, if you believe (as Frydenberg does) that putting money in the hands of people with less money it a good way of ensuring it gets spent, then this is proper bang for buck.

Certainly, it seems a more efficient way to stimulate the economy than the upper end of the announced tax cuts.

Moreover, the government had already increased the payment at the onset of the pandemic. It had done the political groundwork. Even if it wanted to reduce JobSeeker, it could easily have settled on a level above poverty at no political cost.

If you are not going to raise unemployment benefits now – when the deficit is a non-issue, when the economy desperately needs stimulus, and when there’s no political downside – then it’s impossible to imagine when you would.

The decision to return JobSeeker to pre-COVID levels can only be ideological. It fits the long-established Liberal narrative of how unemployment works.

That narrative says unemployment is very significantly a matter of incentives. You get people into jobs by, among other things, requiring them to apply for lots of them, and making unemployed life uncomfortable enough that they have every reason to get one.

This supposes people are unemployed by choice as much as by circumstances beyond their control.

That’s why we’ve had “mutual obligation” requirements for decades.

It’s why in last year’s budget when the government was handing out a rebate to help people struggling with energy prices, it specifically denied this to the unemployed – at least until the backlash led the government to relent.

However persuasive that theory of unemployment normally is, it’s difficult to understand now.

We’re in a recession. We have had a huge rise in unemployment, and an even bigger one in underemployment.

The problem isn’t a throng of dole recipients too lazy to get jobs. The problem is there are simply not enough jobs to go around.

The government’s data from August had more than 15 job seekers for every vacancy. You could remove all the dole bludgers from those figures and you’ll still end up with far too many eager, qualified people with no hope of employment.

And yet, despite removing mutual obligation requirements from JobSeeker for a time, the government announced a couple of months ago it was reintroducing them. That came into effect last month.

Certainly, this is an extraordinary budget. It reverses much of the Coalition’s rhetoric on debt and stimulus. But these are such extraordinary times that the government had no choice.

What’s more remarkable is how familiar the budget is, despite the extreme numbers. It is the budget of a government that first spoke of “hibernation” and “snapping back” from COVID, like the pandemic had hit “pause” and we would simply hit “play” one day.

That has proven impossible, but it revealed a desire to preserve the economy rather than refashion it. That has been the aim of even the government’s most radical interventions.

This budget confirms that that however extreme the situation, and whatever your political stripes might be, the Coalition sees no reason to change theirs.

Waleed Aly is a regular columnist.

Waleed Aly is co-host of Ten’s The Project and is a lecturer in politics at Monash University.