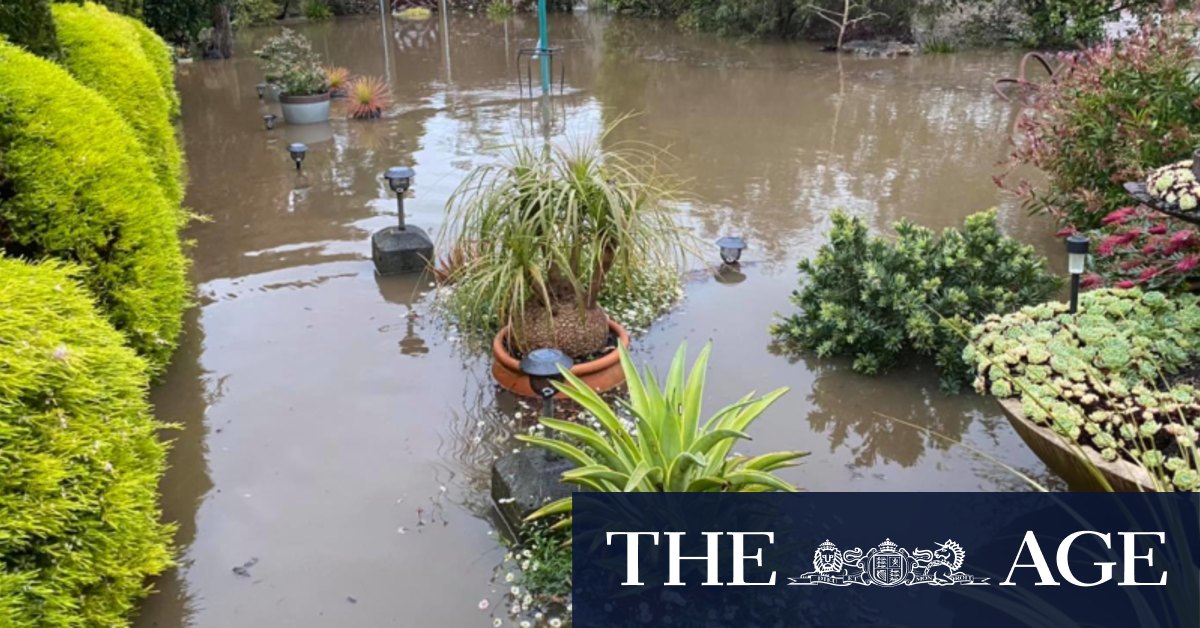 Warrnambool Incident controller Alfred Mason said on Saturday morning that no Warrnambool homes were yet inundated, but four homes had so far been flooded in the Port Fairy.

“Unfortunately we weren’t able to stop that water going through,” he told ABC Radio South West.

He said there were about 40 crews of both SES and CFA volunteers between Warrnambool and Port Fairy still out on Saturday morning sandbagging and pumping water to protect homes from flood waters.

“The Hopkins River is still rising and we’re monitoring that in case it has an affect on Allansford,” he said.

Allansford, near Warrnambool, was already experiencing inundated homes on Thursday.

Mr Mason said the Moyne River was becoming stable, but would continue to be high and would drop very slowly due to the high sea levels at the moment.

“It’ll only drop 300 mm from a high tide,” he said. “So water will actually be around now probably at least in these area through to tomorrow”.

He asked residents not to drive through flood waters at all, as it could create a “wake” and push water over the top of sandbags and into people’s homes.

Residents of Warnambool and Port Fairy and its surrounding areas were told by the State Emergency Services on Friday to decide whether to evacuate, with a number of road closures and flooding above floor level of a single story home expected. The emergency warning remains in place as of Saturday morning.

Warrnambool received 84.2mm of rain across Wednesday and Thursday, with more rain falling in two days than the region usually receives during the whole month of October. 93.6mm fell in the Grampians at Mt Williams, and 62mm in Camperdown.

Port Fairy recorded 66mm across two days, with no rain falling in the town from 9am on Friday.

Keris Arndt, senior forecaster at the Bureau of Meteorology, said the impact of Wednesday and Thursdays rains was delayed and the coastal towns were only now bearing the brunt of flooding.

“Flood waters take a fair while to move down the river catchments,” Mr Arndt said.

In Warnambool, areas adjacent to the the Merri River, including Dennington and Woodford are currently flooded after the river peaked at 8.132 metres on Friday morning.

Both the Merri River and Russells creek systems are expected to very slowly recede today.

In Port Fairy, the Moyne River, Murray Brook, Reedy Creek and Belfast Lough all flooded overnight., with low lying properties in surrounding areas likely to be impacted by flooding.

Mr Mason said the floods affecting the Great Ocean Road towns were a one in 10 to 20-year event and were likely to have greater impacts than an August 2010 flood event, which resulted in more than 167 properties impacted by flooding.

The weather bureau says Sunday and Monday will be more “settled” in the south-west, with generally drier conditions before a wet cold front overnight into Tuesday would bring showers again to coastal towns.

The SES says those who choose to evacuate their homes should remember to take pets, mobile phone, spare clothes and medications.

Travel to the home of family or friends who are in a safe location, away from flooding and to be aware of any road closures when you leave.

For those travelling, be aware of road hazards including mud, debris and damaged roads or bridges and never drive, walk or ride through floodwater.

There is still a moderate flood warning in place for the Ovens and King Rivers in the north north-east of the state, while there are minor warnings issued for the Glenelg River, Goulburn RIver, Macalister River and the Seven and Castle Creeks.

Melbourne will enjoy a relatively warmer day on Saturday compared to earlier in the week, with a maximum temperature of about 20 degrees.

Mr Arndt said there was a chance of a shower up to 1mm mostly in the outer north eastern suburbs, which would take Melbourne up to it’s annual rainfall average total for the year already.

As of Saturday morning Melbourne was .8mm away from hitting the 648 millimetre yearly average, which will be the earliest it’s done so in 24 years.

Mr Arndt said there would be a “weak front that moves in overnight Saturday across Melbourne meaning Sunday would be slightly cooler than Saturday with a top of 17 degrees.

“It’ll be pretty warm early next week,” he said, with Monday set for a top of 24 degrees, and 21 on Tuesday.

To stay up to date with local warnings:

Previous ‘Dishonest and unfair’: Liberman family ethical fund in property row
Next If ‘all things must pass’, when will COVID-19 subside, asks hard-hit Liverpool