Why I am concerned for Sam Burgess and the Souths doctor 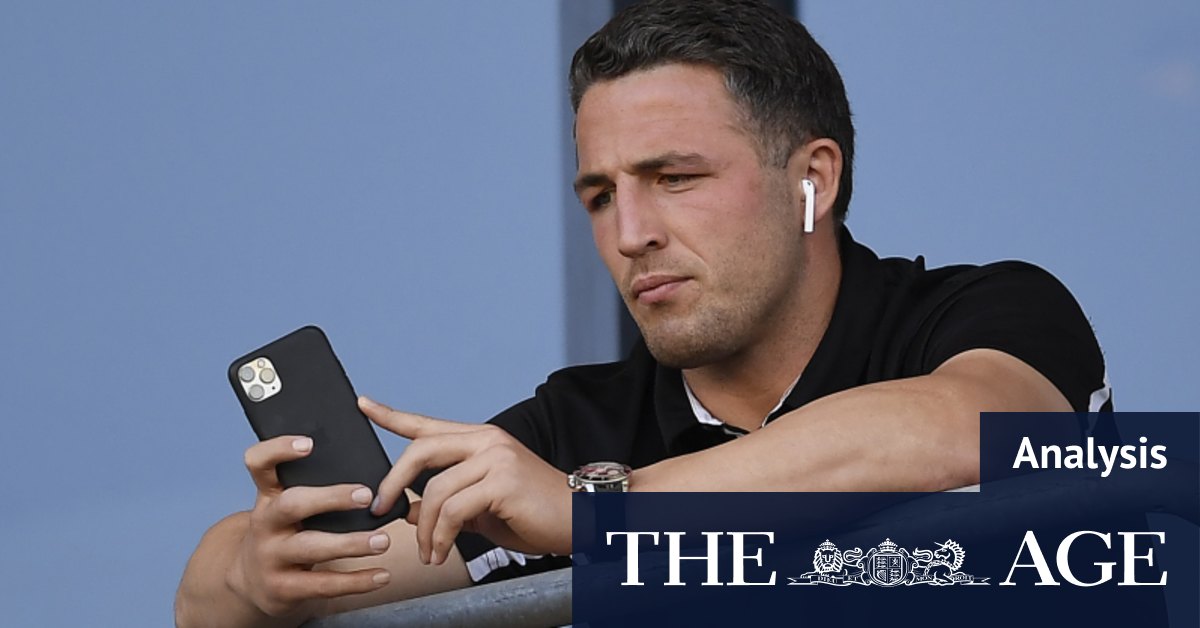 On the other hand, it’s necessary to analyse the connected allegations put against the Souths chief medical officer, Dr Andrew McDonald. This evening, just like last weekend, Dr McDonald will take his place with the Rabbitohs’ team at Bankwest Stadium, in fulfilment of his professional duties. Dr McDonald should, and must be permitted to, do exactly that. As matters presently stand, no case has been put to Dr McDonald by the NRL, the Health Care Complaints Commission or any other body holding requisite jurisdiction.

This observation duly made, the as-yet untested but published allegations about Dr McDonald, concerning certain of his interactions with Burgess require due examination. Specifically, it’s suggested that on or about November 6 2018 Dr McDonald attended upon the then-Souths player Burgess and, after examining him, (eventually) injected him with liquid tranquiliser prescribed by him, but to a person other than Sam Burgess.

The starting point absolutely must be that as matters stand, Dr McDonald has had no case put before him. Unless that status quo is altered, any suggestion that Dr McDonald should somehow not be performing in his professional capacity for some indeterminate interim period is sheer white noise.

Second, it needs to be put in no uncertain terms that the medical prescribing of, and administration to athletes of tranquilisers such as Diazepam (marketed under brand names including Valium) and other benzodiazepines, isn’t something which is prohibited under international anti-doping rules, either in or out of competition.

At first blush, there is a bit of a motive vacuum here – why bother going to the effort of prescribing a hardly-unusual substance through a third party?

Third, concepts of medical practitioners prescribing Diazepam and substances within the same classification under the Australian Poisons Standard, by issuing bogus prescriptions in the names of third parties to whom the medicine will not eventually be administered, constitute allegations of serious departures from what is expected of registered medical practitioners in NSW. it would be a serious and unjustifiable professional transgression for a doctor to prescribe restricted medicines through naming a third-party proxy.

The Australian Poisons Standard is adopted as the applicable poisons list under NSW law. Diazepam is listed as a Schedule 4 restricted substance. The Poisons and Therapeutic Goods Regulation 2008 does amongst other things regulate the prescribing of, supply and administration of Schedule 4 medicines.

Those regulations are extensive and onerous – only a medical doctor can prescribe a Schedule 4 substance, and then only for the purpose of medical treatment. The quantity of, and purpose for prescribing must accord with recognised therapeutic standards.

A medical practitioner can administer a Schedule 4 restricted substance to a person for the purpose of medical treatment without a prescription if the doctor already has the substance in their kit-bag. Otherwise, except in the case of specific chlamydia medications (true!) a restricted substance can only be prescribed for the treatment of a patient. The prescription must record the name, and the address OF THE PATIENT.

Medical practitioners determined to have traversed the strict legal prescribing rules can face professional disciplinary action conducted by the Health Care Complaints Commission. It’s not fanciful to say that a doctor could lose the right to practice medicine as a result of such matters, which is why allegations of this nature mustn’t be bounced around flippantly.

No noise should now be made about Dr Andrew McDonald’s continued involvement in rugby league as South’s chief medical officer UNLESS and until a number of crucially important questions can be answered.

Did Dr McDonald attend upon Sam Burgess on November 6 2018, as is suggested? If so, was Dr McDonald engaged to provide medical services in his capacity as Souths’ CMO, or in his capacity as a doctor in private practice? If the latter, one can’t imagine the NRL has too much in the way of jurisdiction over anything moving forward.

Is it true that Dr McDonald prescribed a substance to be administered to Burgess, by issuing that prescription in the name of a third party? If so, what is the name of the third party? If so, why did the doctor proceed on that basis; was there some exceptional reason to do so? Importantly, what is that third party’s complicity in any such conduct? Was the third party an innocent and clueless vector? What’s the cogent evidence that the tranquiliser in question wasn’t prescribed to treat the person whose name is on the script?

Was the supplied, prescribed substance dispensed to the third party whose name appears on the script? If so, what is that third party’s complicity in any potential contravention of the Poisons and Therapeutic Goods Regulation, in circumstances where that third party presumably knew that the substance was in fact not being prescribed to him or her?

Unless and until every one of these questions can be (and is) conclusively answered, with those answers underpinned by evidence comfortably proving the truth of those answers, Dr Andrew McDonald should and indeed must be permitted free passage to do the job that he is engaged to do.

Although a sports physician’s obligations to the athlete are irrefutable, they can be chewed at to the threshold of complete distortion. Of all people, the doctor should be the person least afraid to scream “NO”.

Darren Kane is a sports columnist for The Sydney Morning Herald.