From the Archives, 1982: Tempers flare as protesters storm the Melbourne Club

admin 2 weeks ago Victoria News Comments Off on From the Archives, 1982: Tempers flare as protesters storm the Melbourne Club 9 Views 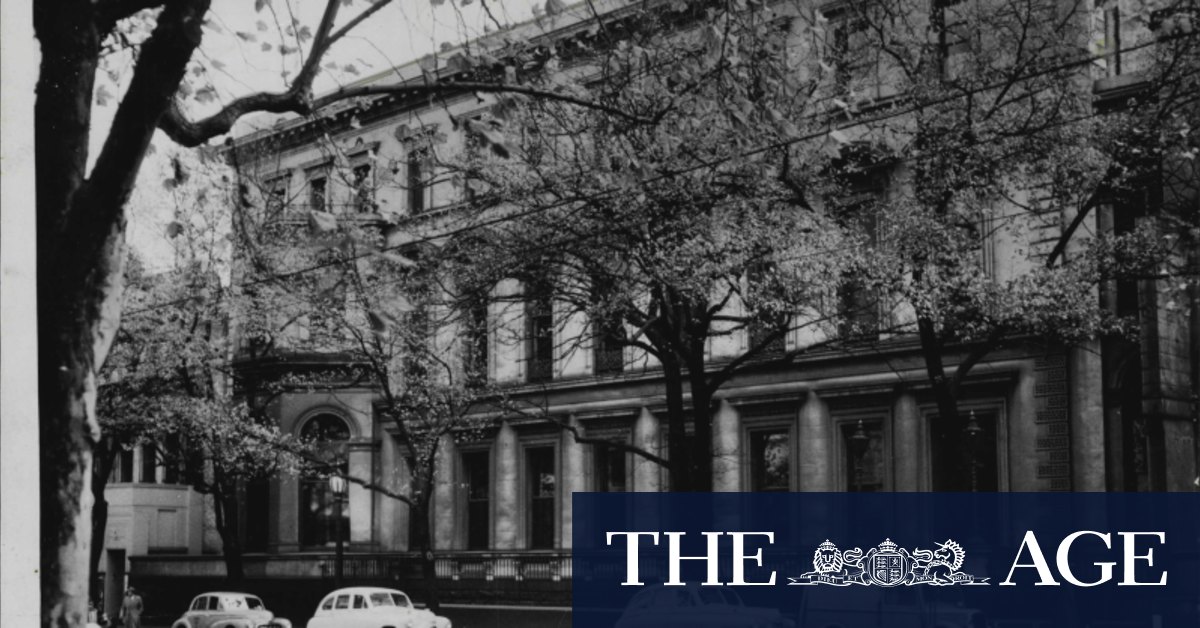 Their purpose was vividly expressed in leaflets they distributed to bystanders: “The Melbourne Club at the top of Collins Street in the city is the best known and most obnoxious retreat of the spoilt rich.

“While Victorian Liberal leaders Lindsay Thompson and Digby Crozier, along with Press barons Sir Vincent Fairfax and James Fairfax, can gorge themselves on two-hour business lunches served on expensive silver, many unemployed and pensioners are worrying where their next meal is coming from.”

The only “Press Baron” present at any stage of the 30-minute occupation was the chairman of the Herald and Weekly Times Ltd., Sir Keith Macpherson.

Sir Keith, emerging from the club soon after 2 pm, said: “One couldn’t deny that members of the Melbourne Club had some considerable wealth, but I don’t think you should invade any private quarters like that.”

Other habitués of the 144-year-old retreat for Prime Ministers and captains of industry were blunter. Mr Darren Baillieu, a member since 1938, snorted: “It’s bloody silly. If they walked into your home you’d object, wouldn’t you? This is our home.”

Another member, a retired company director and practicing solicitor, Mr Thomas Graham, said he had a great sympathy for the unemployed but considered yesterday’s protest, by the Work for Today group, to be misconceived.

“In the minds of a lot of people, the club is somewhere where people talk with malice aforethought and try to take the poor people down. You know, if anyone tries to talk business here, he is soon told to shut up.”

Demands by the protesters that free meals, childcare and accommodation be “provided within these large premises” for women, the unemployed and pensioners were dismissed as naïve by a southern NSW grazier member who declined to be named.

“Can I quote Albert Langer? He said it’s a consistent lie to blame the Government for unemployment at a time of world recession.

“We’ve got a terrible drought up there. You just have to knuckle under and do something about it, and you don’t necessarily ask for handouts.”

The Melbourne Club’s secretary, Mr Ronald Titcombe, said he regretted the incident and that any comments by members “could only exacerbate the situation.”

But he denied the club was a bastion of wealth: “The two are not synonymous by a long way. I know of five members, off the top of my head, who are retired and are pensioners and whose fees have been cut back so that they may stay members of the club.”

Half an hour after the protest began, Mr Titcombe called in the police. A spokeswoman for the protest group, Ms Colleeen Hartland, claimed later that police had put protesters in a council van without ventilation.

A police spokesman said last night that 13 complaints from protesters had been received and would be investigated.

Seventeen people, most of whom said they were unemployed, appeared in the Melbourne Magistrates Court later yesterday charged with trespassing.

No pleas were taken.

Sergeant Graeme William Batson told the court he had been called to the Melbourne Club about 12.45 pm to help other police officers. “I arrived and saw the defendants and others sitting on the floor in the main function room of the club. I was present when the secretary of the club, Mr Titcombe, asked them to leave. They refused and were subsequently arrested.”

Mr. A. R. Ellis, SM, asked Sergeant Batson whether any of the defendants had told him the reason for their action. Sergeant Batson: “I believe it was in relation to unemployment.”

Mr Ellis asked each of the defendants whether they had any intention of returning to the Melbourne Club. One male defendant, Glenn Anthony Davis, 19, said: “Only when I’m a member.”

Mr Ellis remanded the nine women and eight men to appear at the court on 26 November.

He granted each bail with no surety and no conditions after warning them they would be committing an offence if they returned to the club before their next court appearance.