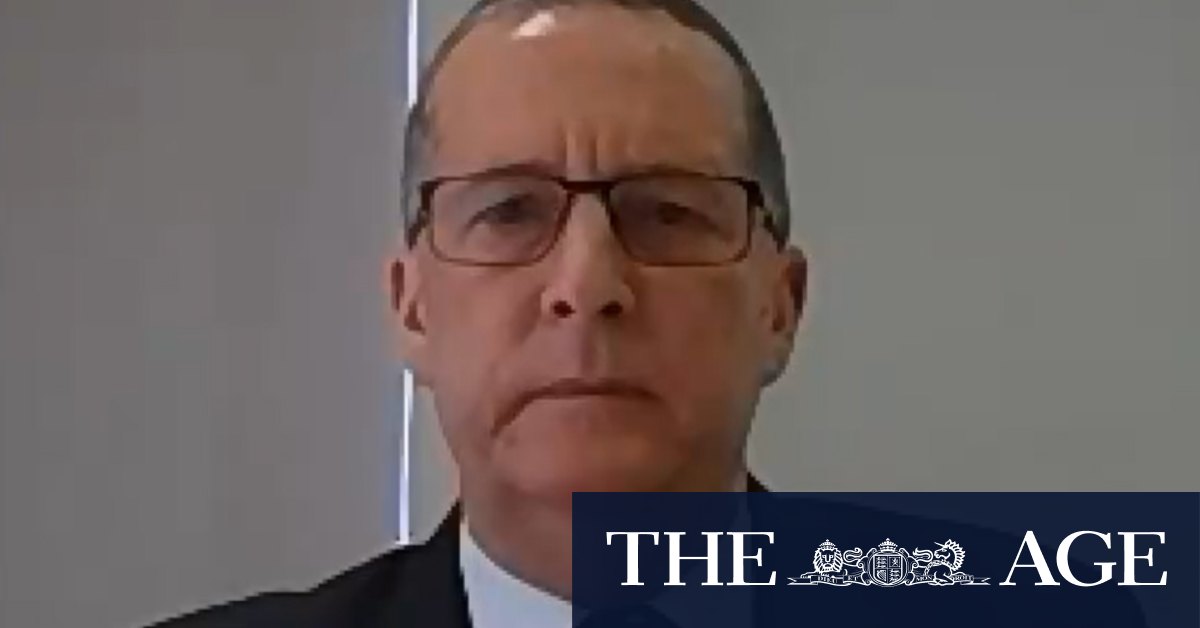 “I was shocked when I was informed last night that this call had been made and that a detailed examination of his records had shown that,” Mr Andrews told reporters on Monday.

The Premier revealed Mr Eccles was in a meeting where the government was informed that 99 per cent of Victoria’s second-wave cases could be traced back to breaches in the hotel quarantine program.

“He was in the meeting where we received the genomic sequencing from the Chief Health Officer and there were many questions and I couldn’t get answers to those questions, and that is exactly why I charged him with setting up the board of inquiry,” Mr Andrews said.

The Premier said Mr Eccles’ resignation was a “significant development” but the public service was bigger than one person.

‘Matters as to who would perform functions within the hotel quarantine program are operational decisions, not decisions made by me, nor any member of my private office staff.’

On Sunday the hotel quarantine inquiry asked Mr Eccles and other senior Department of Premier and Cabinet officials to hand over their phone records to determine whether they called Mr Ashton on March 27 – the day that it was decided private security would guard returned travellers in Melbourne’s quarantine hotels.

Mr Eccles, who told the inquiry on September 21 he did not recall whether he phoned Mr Ashton, said in a statement on Monday morning that his phone records showed he had phoned Mr Ashton at 1.17pm on March 27 and spoke to him for two minutes.

National cabinet, which Mr Eccles attended alongside the Premier, met until about 1pm as it decided a hotel quarantine program would be set up.

After that call Mr Ashton sent a text message to Australian Federal Police chief Reece Kershaw at 1.22pm, saying a plan had been set up by Mr Eccles’ Department of Premier and Cabinet (DPC) to use private guards.

However, Mr Eccles remains adamant that he did not tell Mr Ashton that private security would be used.

“The telephone records do not in any way demonstrate that I, or indeed anyone else in DPC made a decision that private security be used in the hotel quarantine program,” Mr Eccles said.

“I am absolutely certain I did not convey to Mr Ashton any decision regarding the use of private security as I was unaware any such decision had been made, and I most certainly had not made such a decision myself.

“There has been much commentary and speculation about whether I or anyone else at DPC spoke to Mr Ashton during that narrow time frame on March 27. It is now evident I did.

“Ultimately the board will make its conclusions regarding the matters before it. However, in the circumstances and with the heightened level of focus on this issue, I do not want a focus on me to in any way undermine the extraordinary work of the public sector as it continues to respond to the unprecedented challenges of 2020.”

Mr Andrews rebuffed suggestions his chief of staff, Lissie Ratcliff, was involved in the decision to use private security guards in the hour after the March 27 national cabinet meeting.

Ms Ratcliff was not called to give evidence to the hotel inquiry, but her phone records may be handed to the board.

“Matters as to who would perform functions within the hotel quarantine program are operational decisions, not decisions made by me, nor any member of my private office staff,” the Premier said.

“Beyond that, as to who is called and who was not called, who is required or asked to provide information or details to the board of inquiry, that is entirely a matter for the board.”

Mr Andrews has not yet handed his phone records to the hotel quarantine inquiry but he expects this to be actioned today.

He said he would, time permitting, inspect his phone records from March 27 to see if he could glean any insights into what occurred and who he had spoken to.

“I’ve had a good long hard think about that day and I provided my evidence to the inquiry,” he said.

“I do not know who made that decision, that is the fact of the matter.”

Mr Andrews said there was no decision made by either himself, Ms Ratcliff or Mr Eccles after the 1pm conclusion of the national cabinet meeting on March 27.

“I can assure you I did not advise him or discuss with him … things of a deeply operational nature. No such conversation ever occurred nor has any evidence been led to suggest that,” he said.

“With those closest to Daniel Andrews being forced to resign, more and more his story simply doesn’t add up,” Mr O’Donohue said.

“It’s now incumbent on the Premier to explain again exactly what he knew and when, and hopefully this time he doesn’t have a severe bout of amnesia.”

In response to questions from the lawyer for Victoria Police, Dan Star, QC, Mr Eccles told the inquiry he had checked his phone records, which he said were not complete, to determine if he called Mr Ashton back.

In his statement on Monday Mr Eccles said: “At the time I gave evidence I did not have in my possession my full telephone records.”

“No decision was made by me nor, as far as I am aware, any other person within DPC, to engage private security for use in the hotel quarantine program,” Mr Eccles said in the statement.

In his second statement to the inquiry, dated September 16, Mr Eccles said he did not have a copy of Mr Ashton’s text message on his phone and “I do not now recall what, if anything, I did in response to that text message”.

Mr Eccles, who sometimes referred to himself as “Mr Wolf” after the Pulp Fiction character, thanked Mr Andrews for allowing him to serve as the head of his department.

“I have taken this decision with a sense of clarity that to remain in this position would be a significant distraction to the ongoing work of the Victorian public sector and the citizens of our state as we enter a critical phase of easing COVID-19 restrictions.”