admin October 27, 2020 Sport Comments Off on Race-by-race preview and tips for Kensington on Wednesday 17 Views 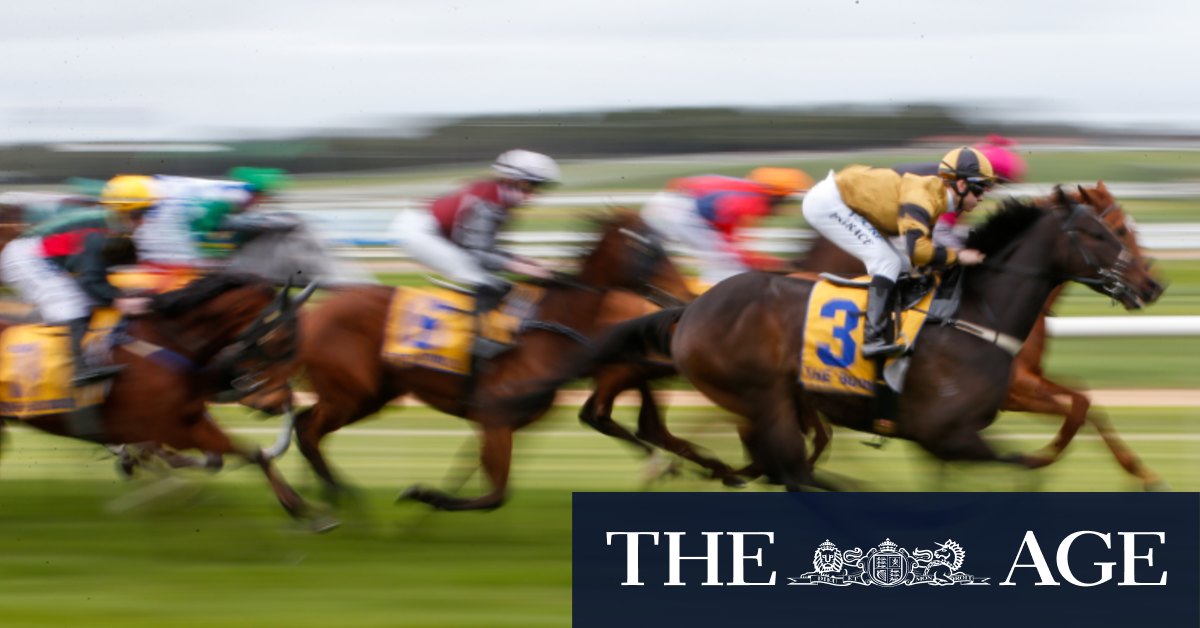 2. Parry Sound deserves to be favourite and while he hasn’t raced on a heavy track he’s bred to handle it and he’s hard fit after three runs back. Far too strong out to 2200m third-up and has been set up well for this trip now. Should go close.
Dangers: 1. Frenzied is a bulldog and he toughed it out to win over this course a month ago. Trialled since and he while he is also a query on a heavy track we haven’t seen enough of him in the wet to judge. Good chance. 5. Dambulla is one of few horses to have a bit of heavy track form albeit that was at Gosford in August and he ran third. Placed at his past couple, an on pacer who will give a sight. 6. Notabadharada mixes distances and while he hasn’t been placed at his last seven starts he hasn’t been too far away. Is a heavy track winner and was only three lengths off Frenzied two runs back at this trip. Has a show.
How to play it: Parry Sound win; Trifecta 2/1,5,6/1,5,6.
Odds & Evens: Split.

5. Dream Circle has a good chance to post a win on the back of some handy form this time in including a sound third at Randwick behind Bombasay. Up in trip but drawn well and with the claim is nicely weighted for a drop in class. Will need the breaks but has strong claims.
Dangers: 4. Wairere Falls backs up after a strong finishing win at Hawkesbury last week where he settled last and came down the outside fence to score. Has handled a soft 7 in Victoria so track should be OK, he’s on the up and is the logical danger. 6. Notabadidea is back from the 2600m of the St Leger but was placed over a mile at Warwick Farm two weeks ago. He’s another that mixes trips and he’s also proven in the wet so he has to stay under notice. 1. Chalmers has found form again with a couple of wins out of down but does have the steadier of 61kg. Drawn well and handles the wet so more than capable of being competitive.
How to play it: Dream Circle win; Quinella 4 & 5.
Odds & Evens: Split.

2. Catapult is a very consistent gelding and he’s working up to a win. Ran a smart one to a small margin at Newcastle third-up, handles all conditions and drawn well for a strong rider. Hard to see him not being in the finish here.
Dangers: 5. Just Field has a small heavy track query but hasn’t been tried in it so can’t be condemned. Seemed to have her chance at Warwick Farm last time but previous form good including a second to Emeralds. Definite threat. 6. Bob’s Your Uncle has some good wet track form from last time in over a bit further and resumes without a public trial. One to keep an eye on first-up in suitable ground. 1. Sausedge is arguably the best horse in the race and she’s a BM78 winner in town. Disappointed before a spell but has trialled twice on wet tracks and is sure to be hitting the line strongly. Can’t overlook her.
How to play it: Catapult win; Trifecta 2/1,5,6/1,5,6.
Odds & Evens: Split.

Karmazone is threatening to win a race and this could be a good chance. Racing well of late and closed off nicely in a race not run to suit at Warwick Farm when just behind the placings. Runner-up has since won. Good each-way hope.
Dangers: 4. Nyami appears a very promising horse and has shown plenty of purpose in two wins this time in at the provincials. Yet to see a heavy track, his soft win was on a 5 so that doesn’t count as a wet track win. Can be hard to hold out if he handles the ground. 5. Deadly Impact fought hard when a close second to Nyami at Kembla last time so has to be considered with a weight swing in his favour. Hard to get a guide in the wet with him but otherwise right in it. 9. Rules Don’t Apply disappointed when a battling fourth at Canterbury last time but she’s looked pretty good in her few wet track attempts. She’ll win one of these city races sooner or later and has to go in the mix.
How to play it: Karmazone each-way.
Odds & Evens: Split.

7. Snippy Fox has been racing well on good tracks at this level but a wet track might make her a lot harder to beat. Won both heavy track starts when coming through the grades and has drawn quite well to get her chance.
Dangers: 4. Money Magic is a lot better than her first-up run suggests and it’s best to overlook it. May have been in season so there’s an excuse. Has placed on a soft 7 so the wet is no worry and expect her to show a lot more here. 3. Romantic Whisper is generally a front runner and she’s been fitted with a couple of trials for a first-up run. Fresh form is patchy but does handle the heavy and shouldn’t be underestimated. 1. On The White Turf is fitter for one runs back and out to a more suitable sort of distance. Gets back, runs on and the heavy is no issue for her. Blinkers first time so expect her to show something.
How to play it: Snippy Fox each-way.
Odds & Evens: Split.

13. Vulpine is a lightly raced mare with good wet track credentials resuming with an impressive barrier trial win under her belt. Placed on a heavy track here before a spell and expect she will roll forward and look to land on the speed. Look for support as a pointer but go well.
Dangers: 7. Let It Pour is racing well this time in and was just out-toughed by Switched at Warwick Farm two weeks ago. Barrier one gives her plenty of options and if she handles the ground will be thereabouts. 2. Shadow Crush failed at his only heavy track attempt but fair to say he’s going a lot better now than he was then. Dominant winner two weeks ago and form through Canterbury fourth two runs back is good. Must include. 5. Deference didn’t do a whole lot when resuming but he is proven in heavy ground. Wide gate may be an issue but it could be a plus if the pattern swings that way. Capable of being in the finish if the circumstances are right for him.
How to play it: Vulpine win; Trifecta 13/2,5,7/2,5,7.
Odds & Evens: Odds.