admin October 30, 2020 Victoria News Comments Off on After 120 doses of daily Dan, Andrews to take brief break from briefing 95 Views 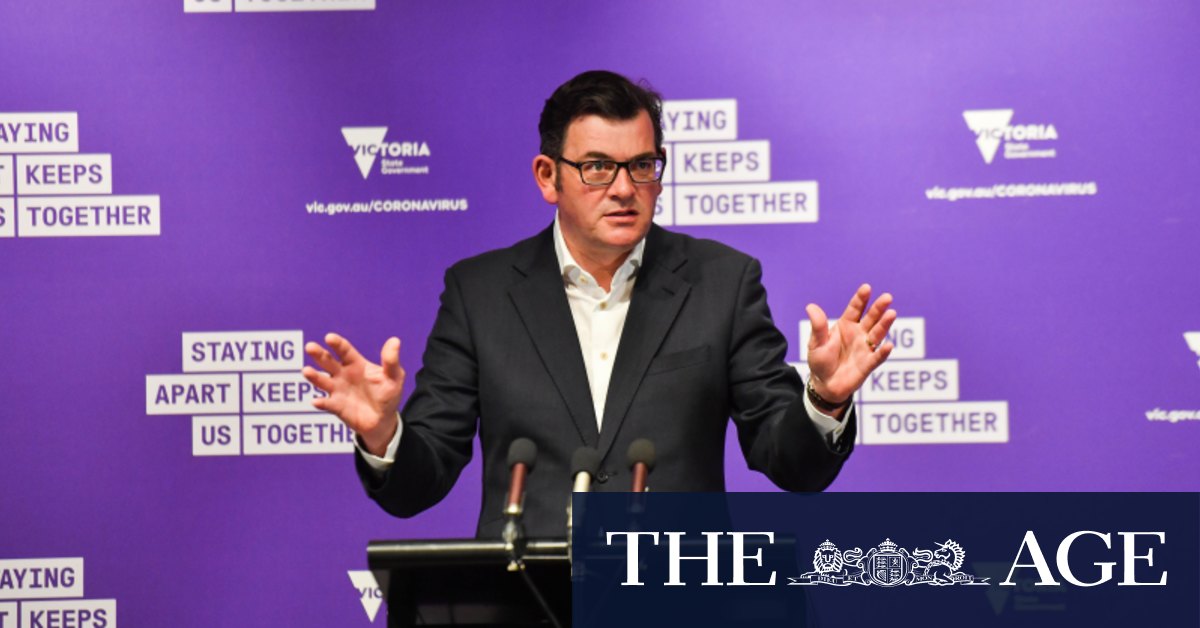 As Victoria recorded four new COVID-19 cases on Friday, including two that are under investigation to ascertain their source, Mr Andrews said he exchanged text messages with NSW Premier Gladys Berejiklian on Friday morning, where she indicated NSW would not reopen the border until at least two weeks after Victoria’s “ring of steel” separating Melbourne from the rest of the state was lifted on November 8.

“We are working very closely together and … Premier Berejiklian’s only ask is that she gets given a bit of time to wait and see how things unfold. I don’t think that’s an unreasonable thing,” Mr Andrews said.

“I think it would be unwise to assume that the border with NSW would be open until at least two weeks has passed since everybody in Victoria can move freely.

“That would be my reading of it. It’s not for me to announce what the NSW government’s position is. But I think that is a realistic expectation that all of us can have.”

Mr Andrews said he also understood Queensland Premier Annastacia Palaszczuk’s announcement on Friday that her state’s border would remain shut to all of Victoria as well as greater Sydney indefinitely.

“We’ve always said, thousands of times I would think, that the cycle of this virus it’s not a day-by-day thing, it’s 10 to 14 days, and it’s not unreasonable to wait and see how things evolve, how things unfold,” he said.

Singapore will open its borders to all of Australia, including Victoria, from December 6 and Mr Andrews said if case numbers stayed low, more international travel bubbles could be developed.

The Premier said Victoria was on track to lift restrictions such as the 25-kilometre limit on November 8 if case numbers continued as they had this week.

Melbourne has recorded nine cases since Monday and just two “mystery cases” with an unknown source in the fortnight to October 27, while regional Victoria has had zero overall cases in the last fortnight.

After reports of variable compliance with social distancing rules, Mr Andrews urged Melburnians to follow rules around social distancing and hygiene as the city prepares for its first weekend with eased restrictions.

Victoria has not released an overarching QR code system for venues to record visitors’ details for contact tracing, which states such as NSW have in place. Mr Andrews said that process was underway but “it’s a little bit more complex than people think”.

“And I would just note this again, this is no way a criticism, it’s just a fact, NSW have only just moved to the current final instalment of their QR product, in fact they are in the process of doing it now. We will get there. I expect at the same point in that opening up journey, we will absolutely have the product out there and working very, very well.”

Hospitality and retail in NSW reopened in mid-May.

A child who attended a childcare centre in Bundoora, in Melbourne’s north-east, while potentially infectious last week sparked 117 primary close contacts and secondary contacts to be tested on Thursday. None have so far tested positive to COVID-19, with 63 negative results and 54 pending on Friday.

All 40 primary close contacts will be required to isolate for 14 days, while secondary contacts can leave isolation once they test negative, in line with Victoria’s more cautious approach to outbreak management adopted earlier this month.

The government was continuing to monitor an outbreak in the northern suburbs on Friday, with almost 3700 tests in the area processed from Thursday to Friday morning. One of Friday’s cases under investigation has been in the Deer Park area, in Melbourne’s west, with those in the area urged to get tested if experiencing any symptoms.

Chief Health Officer Brett Sutton called the risk of a third wave “minimal but not zero” and said the onus was on business managers to enforce rules.

Professor Sutton said individuals would need to do the right thing personally, but also be willing to “call people out politely but appropriately” if they’re doing the wrong thing or turn them away from their homes if the visitor is sick.

“It will not be zero for any of us in Australia until there is a widespread use of a vaccine that is effective,” he said.

“We do have to recognise that if we put aside all of those behaviours that we know have worked in stopping transmission, we put everyone at risk again.

Professor Sutton said two of the positive cases reported on Friday morning were “weak positives” that will be reviewed by an expert panel.

After a promising week that included zero cases on Monday and Tuesday, Professor Sutton said while the state was not going for the elimination of COVID-19, it could “happen by virtue of finding everything that is out there” and was possible.

“We aren’t hanging our hats on that because there could be hidden cases, chains of transmission that just go on without being detected as well,” he said.

“If we can find each and every case that identifies the chains of transmission and use the isolation and quarantine in that broad contact tracing that has been done to stop it all, fantastic.”

Melbourne residents will enjoy their first weekend with newfound freedoms, but there will be no crowds at Flemington for Derby Day and traditional Halloween trick-or-treating is off the cards on Saturday.

The 14-day statewide average has risen slightly to 2.6, up from 2.4 on Thursday.

There were 23,583 tests completed across Victoria on Thursday. There are just 80 active cases across the state, with all of them in metropolitan Melbourne.

Five people remain in hospital with the virus, but there is no-one currently in intensive care.

Five healthcare workers are positive with COVID-19. There are now just four people connected to aged care in Victoria that have a positive case of the virus.

As Melbourne prepares for its first post-lockdown weekend, industry heavyweights have urged businesses to follow COVID-safe plans and avoid risking a third wave of the pandemic after photos emerged of some outlets flouting rules when they reopened this week.

Around Melbourne on Wednesday night and Thursday, some people were seen in pubs sitting shoulder-to-shoulder and not social distancing.

Last month – with the government under pressure to relax the lockdown – the Victorian Chamber of Commerce assured authorities that businesses would “take every precaution to prevent” a third wave, and that the hospitality industry should be “trusted” to operate safely.

The chamber’s chief executive Paul Guerra urged customers to exercise their right to shop elsewhere when they saw businesses doing the wrong thing such as not taking contact details.

“It’s not on. It’s just not on. Every business owner needs to be doing the right thing and, as I said before, don’t put yourself in a risky position if they haven’t taken your details. Why would you stay?,” he told 3AW radio.

Mr Guerra said major business associations met with the state government on Thursday to discuss enforcement including the prospect of a statewide advertising campaign.

“Each one of us plays a part in that as well so if we’re seeing business owner and not doing the right thing, talk to the manager on the day and if you don’t get the response you need ring the COVID hotline,” he said.

An Ipsos poll commissioned by The Age and Nine News has found that Victorians are most worried about a third wave of the coronavirus and a further lockdown when thinking about next year, and more than half say the pandemic has affected their mental health.

The poll also shows COVID-19 had disproportionately affected young people’s mental health, with three-quarters of those aged 18 to 24 saying it had been impacted.

The Commonwealth Bank at Northland Shopping Centre was listed as a high-risk exposure site on Thursday. Anyone who was at the bank on Wednesday, October 21, between 10am and 10.30am is urged to get tested.