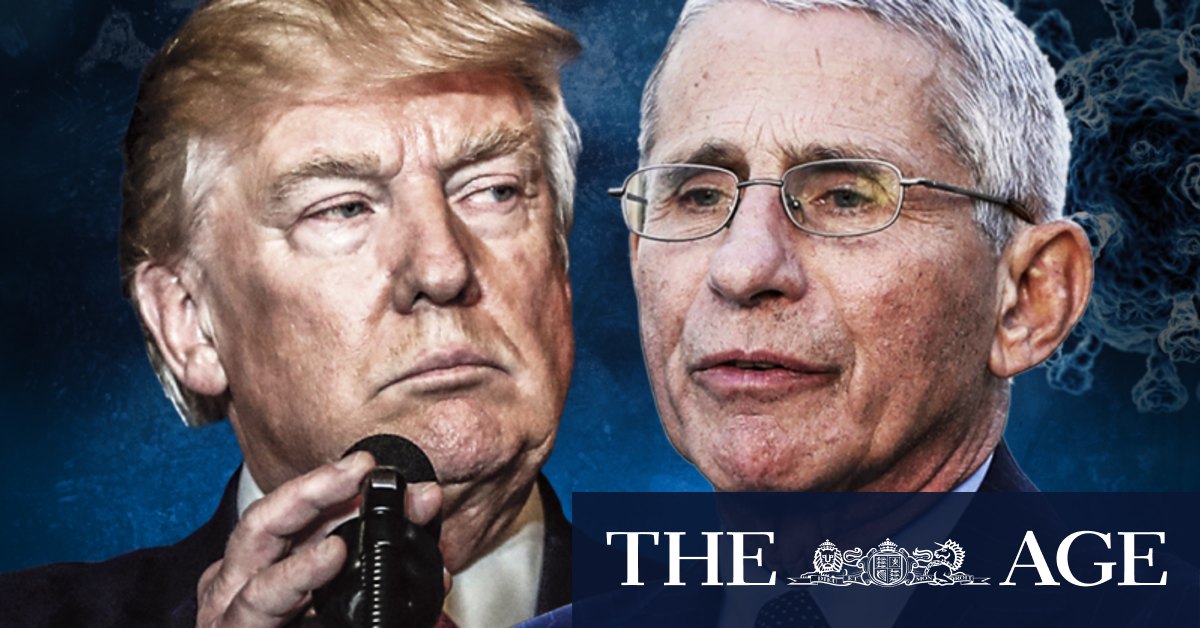 It’s the most direct Trump has been in suggesting he was serious about trying to remove Fauci from his position. He has previously said that he was concerned about the political blowback of removing the popular and respected doctor before election day.

Trump’s comments come after Fauci levelled his sharpest criticism yet of the White House’s response to the coronavirus and Trump’s public assertion that the nation is “rounding the turn” on the virus.

Fauci claims Trump has ignored his advice for containing the virus, saying he hasn’t spoken with Trump in more than a month. He has raised alarm that the nation was heading for a challenging winter if more isn’t done soon to slow the spread of the disease.

In an interview with The Washington Post this weekend, Fauci warned that the US will have to deal with “a whole lot of hurt” in the weeks ahead due to surging coronavirus cases.

Fauci said the US “could not possibly be positioned more poorly” to stem rising cases as more people gather indoors during the colder fall and winter months. He says the US will need to make an “abrupt change” in public health precautions.

Fauci added that he believed Democrat presidential candidate Joe Biden “is taking it seriously from a public health perspective,” while Trump is “looking at it from a different perspective”. Fauci, who is on the White House coronavirus task force, said that perspective emphasises “the economy and reopening the country”.

In response, White House spokesman Judd Deere said Trump always puts people’s well-being first and claimed that Fauci has decided “to play politics” right before Tuesday’s election. Deere said Fauci “has a duty to express concerns or push for a change in strategy” but instead is “choosing to criticise the President in the media and make his political leanings known”.

Trump in recent days has stepped up his attacks on Biden for pledging to heed the advice of scientists in responding to the pandemic. Trump has claimed Biden would “lock down” the nation once again. Biden has promised to heed the warnings of Fauci and other medical professionals but has not endorsed another national lockdown.

Trump has recently relied on the advice of Stanford doctor Scott Atlas, who has no prior background in infectious diseases or public health, as his lead science adviser on the pandemic. Atlas has been a public sceptic about mask wearing and other measures widely accepted by the scientific community to slow the spread of the virus.

Other members of the White House coronavirus task force have grown increasingly vocal about what they see as a dangerous fall spike in the virus.

Trump had earlier cast doubt on the integrity of the US election, saying a vote count that stretched past election day would be a “terrible thing” and suggesting his lawyers might get involved.

“I don’t think it’s fair that we have to wait for a long period of time after the election,” Trump told reporters before a rally in North Carolina. Some states, including Pennsylvania, do not start processing mail-in votes until Election Day, slowing the process.

Trump has said repeatedly without evidence that mail-in votes are prone to fraud, although election experts say that is rare in US elections. Mail voting is a long-standing feature of American elections, and about one in four ballots was cast that way in 2016.

Democrats have pushed mail-in voting as a safe way to cast a ballot during the coronavirus pandemic, while Trump and Republicans are counting on a big election day in-person turnout.

“We’re going in the night of – as soon as the election is over – we’re going in with our lawyers,” Trump told reporters without offering further explanation.

Trump denied an Axios report that he has told confidants he will declare victory on Tuesday night if it looks like he is ahead, even if the Electoral College outcome is unclear. But he said it was a “terrible thing” that ballots would be counted after Election Day.

Asked about the Axios report, Biden told reporters between campaign stops in Philadelphia: “The President’s not going to steal this election.”

All over the US, people are having awkward conversations

That wasn’t on my 2020 bingo card, goes the popular internet expression. It’s used to …