Race-by-race preview and tips for Randwick on Tuesday

admin November 2, 2020 Sport Comments Off on Race-by-race preview and tips for Randwick on Tuesday 15 Views 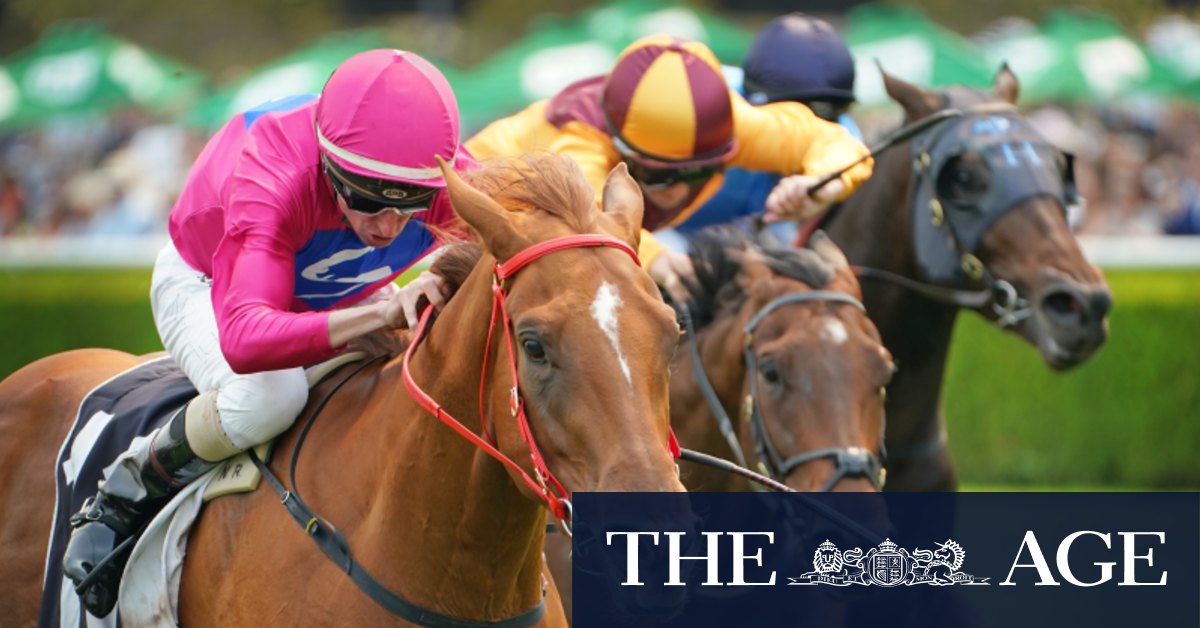 3. Think High blew the start and was well off the pace before charging home to a close second at Lismore on debut. Curious runner here: could easily stay in the country and win a maiden on that effort. Extra trip suits and a good each-way chance.

Dangers: 4. Easifar was expected to win at her second start at Warwick Farm but was very one-paced late after sitting outside the lead. Blinkers go on so entitled to another chance. Has trialled on a heavy track and drawn well so could easily bounce back. 2. Newsreader battled away without looking a threat in a listed race here on Everest Day and the winner has since been group 1 placed. She’s still a maiden, though, and has had a couple of chances this prep already. Include. 5. Prince Invincible raced on the speed, kicked away then was reeled in by Born A Warrior at Kembla last month. Form around him is pretty handy. He’ll likely press forward from the outside and could give some cheek.

1. Cat D’Oro is proven on a wet track and had a couple of close calls back in August with successive seconds. Fitter for a recent trial and does appear to have struck a winnable race fresh. On what he’s done so far he’s the one to beat.

Dangers: 5. Onchao is a big watch on debut, he comes through the same trial as Cat D’Oro and he finished strongly from the back to tip her out of second place. Has a soft 6 trial win on the board and no surprise to see him run well. 12. Kiku was narrowly denied on debut then beaten favorite at Canterbury back in April. Soft trial winner recently and she should be okay on a wet track. Commands some respect. 8. Stoltz has his first start for Annabel Neasham, and as a gelding, and had to like the way he found the line in his trial at Warwick Farm recently. May get back but could run into a placing.

2. Great News is a promising mare and she did enough first-up to hold them off at Newcastle. Fitter for that, drawn well, 3kg off and has a heavy track win – and an impressive one – from back in May. Take plenty of beating here.

Dangers: 5. Dorothy Of Oz was tipped out first-up after leading then favourite and boxed on OK from just off the pace running fourth at Warwick Farm. Expect she’ll look to lead here, wet track failures could be misleading as they were in the Adrian Knox and the Oaks behind Colette. Give another chance. 8. East Asia is an up and comer who was able to swoop down the outside and win that Warwick Farm race in good style. Third horse has since won. Handles the wet and while drawn wide she can’t be left out. 1. Slow Burn has been out of form for a little while but there were signs in her recent trial that she’s in good order as she brushed home into fourth. If she produces her best she can be competitive at odds.

4. Regal Stage can be a big improver third-up back onto a wet track. Eye-catching when resuming then didn’t look comfortable second-up at Warwick Farm. The 1400m suits and, if he doesn’t show his best here, then he’d be hard to follow beyond this.

Dangers: 10. Perfect Radiance had won two from two at Newcastle with her only unplaced run a fourth to Peltzer on a heavy track back in May. Whether it was the class or the track that was the significant factor may be known after this race but any improvement in the track would be to her liking. 8. Private Cheetah led all the way to win at Kensington beating Easifar and Newsreader, who run earlier, then took on listed company and wasn’t quite up to it. Likely to find the lead here and could take some running down. 2. Xanthus worked home from near the tail when second-up behind Emanate in an on-pace dominated race. Only wet track start was inconclusive so take him on trust if you like him. First-up run was good so keep him in mind.

9. Atlantic King looks ready to win after a super first-up run at Kensington a couple of weeks back. He sat wide throughout and was still powering to the line. Winner of that race has won again since, and a wet track is no minus. With even luck this is a big chance for him.

Dangers: 2. Gone Bye is fitter for two runs back and is a heavy track winner. Nice return at 1400m then into the placings last time both on good tracks. Gets the 3kg off here, races on the pace and he could be hard to get past. 12. Kukeracha has put in two solid efforts this prep and, while no match last time, he was warming up late suggesting a mile suits him. Drops 5.5kg and, while unknown in the wet, best to keep him safe. 11. Rathvilly Miss doesn’t know how to run a bad race and she went down fighting to what might be a handy one in Le Gai Soleil. Handles all conditions and is an each-way hope again.

11. Superium needs the track to improve a little to be most effective but can’t let him go after his luckless first-up fourth here a few weeks back. Drops 5kg in a race where there should be solid enough tempo. If he can get a grip on the track, he’ll be running on strongly.

Dangers: 4. Blazing Miss was too tough first-up in the same race as Superium then had good support up to group 3 level and had excuses after a wide run on a deteriorating track. Honest mare and she’s well worth another chance back in class. 8. Spaceboy faces his biggest test but gets in with 54kg and likes a wet track so will get his chance. Had a bit of a checkered preparation so far but will roll forward and give a big sight. Last 100m might be a worry if they take him on. 6. Pandemic couldn’t make up the ground first-up at Warwick Farm over 1000m but hit the line as he usually does. Small query if the track doesn’t improve, but he will get back as usual and look to swoop on them late.

12. Never Talk looks a very promising filly and she’s unbeaten in three starts including a huge first-up win over 900m at Newcastle, where she was slow out but still had plenty on them. Is a wet-track winner and wide gate may not be so bad come the last. Stick with her.

Dangers: 2. Belluci Babe hasn’t seen a wet track yet but she couldn’t have been more impressive in her city debut at Kensington, where she sat just off them and zipped away in the straight. First go 1100m but hard to knock. 18. Great News is a dual acceptor and, if she does run here, she’s right up there with the best chances. Led all the way first-up at Newcastle at 1200m and is proven in the wet. 14. She’s Never Late made her NSW debut at Scone about five weeks ago and it was a huge win coming from last to score by half a length. Up in class but can handle all conditions and could run into the money somewhere. 8. Bigger Than Thorn won on a heavy first-up and made some ground at Warwick Farm last time without threatening. Has a handy record and wouldn’t shock if he’s in the finish.

Previous ‘I knew who I wanted to ride him’: Kah the best jockey for the job
Next Giants want Kelly type of compo for Cameron