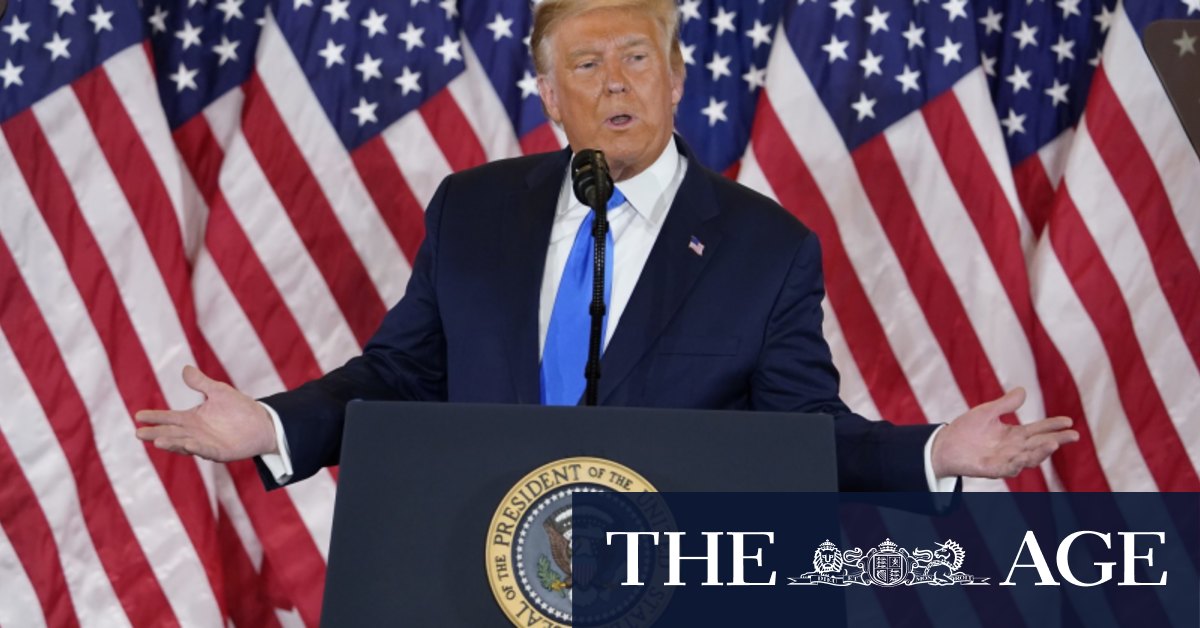 “What we actually saw on election day from the companies is that they were extremely responsive and faster than they’ve ever been,” said Graham Brookie, the director of the Atlantic Council’s Digital Forensic Research Lab. But now, he said, misinformation was solely focused on the results and undermining them.

“You have a hyperfocused audience and a moment in time where there is a huge amount of uncertainty, and bad actors can use that opportunistically,” he said.

Twitter said it was continuing to monitor for misinformation. Facebook said, “Our work isn’t done — we’ll stay vigilant and promote reliable information on Facebook as votes continue to be counted.” YouTube said it also was on alert for “election-related content” in the coming days.

On Tuesday, as Americans voted across the country, falsehoods about broken voting machines and biased poll workers popped up repeatedly. But the companies weren’t tested until Mr Trump — with early results showing how tight the race was — posted on Twitter and Facebook just before 1am local time to baselessly lash out at the electoral process.

“They are trying to STEAL the Election,” Mr Trump posted on the sites, without being specific about who he meant.

On Wednesday morning, Twitter added more labels to posts from Mr Trump. In one, he tweeted that his early leads in Democratic states “started to magically disappear.” In another message, Mr Trump said unnamed people were working to make his lead in the battleground state of Pennsylvania “disappear.”

On Wednesday afternoon, Twitter also affixed context to tweets from Eric Trump, one of Mr Trump’s sons, and Ms McEnany when they pre-emptively claimed that Mr Trump had won in Pennsylvania, even though the race there had not been called.

“As votes are still being counted across the country, our teams continue to take enforcement action on tweets that prematurely declare victory or contain misleading information about the election broadly,” Twitter said.

Facebook took a more cautious approach. Mark Zuckerberg, its chief executive, has said he has no desire to fact-check the president or other political figures because he believes in free speech. Yet to prevent the social network from being misused in the election, Facebook said it would couch premature claims of victory with a notification that the election had yet to be called for a candidate, if necessary.

On Tuesday night, Facebook had to do just that. Shortly after Mr Trump posted about the election being stolen from him, Facebook officials added labels to his posts. The labels noted that “no winner of the presidential election had been projected.”

After the polls closed, Facebook also sent users a notification that if they were waiting to vote at a polling place, they could still vote if they were already standing in line.

On Wednesday, Facebook added more labels to new posts from Mr Trump, checking his claims by noting that “as expected, election results will take longer this year.”

But it was the first time Facebook had used such labels, part of the company’s plan to add context to posts about the election. A spokesman said the company “planned and prepared for these scenarios and built the essential systems and tools.”

YouTube, which is not used regularly by Mr Trump, faced fewer high-profile problems than Twitter and Facebook. All YouTube videos about election results included a label that said the election may not be over and linked to a Google page with results from The Associated Press.

Alex Stamos, director of the Stanford Internet Observatory, said the tech companies still had a fight ahead against election misinformation, but were prepared for it.

“There will always be a long tail of disinformation, but it will become less impactful,” he said. “They are still working, for sure, and will try to maintain this staffing level and focus until the outcome is generally accepted.”

“Platforms need to quickly expand their efforts before the country is plunged into further chaos and confusion,” he said. “It is a democratic emergency.”

Previous Why are these overseas horses breaking down?
Next Morrison not impatient for US election result, confident democracy will prevail