Breaking News
Home / Environment / Like water for electricity, we can go with the flow for cleaner energy

Like water for electricity, we can go with the flow for cleaner energy

admin 4 weeks ago Environment Comments Off on Like water for electricity, we can go with the flow for cleaner energy 19 Views 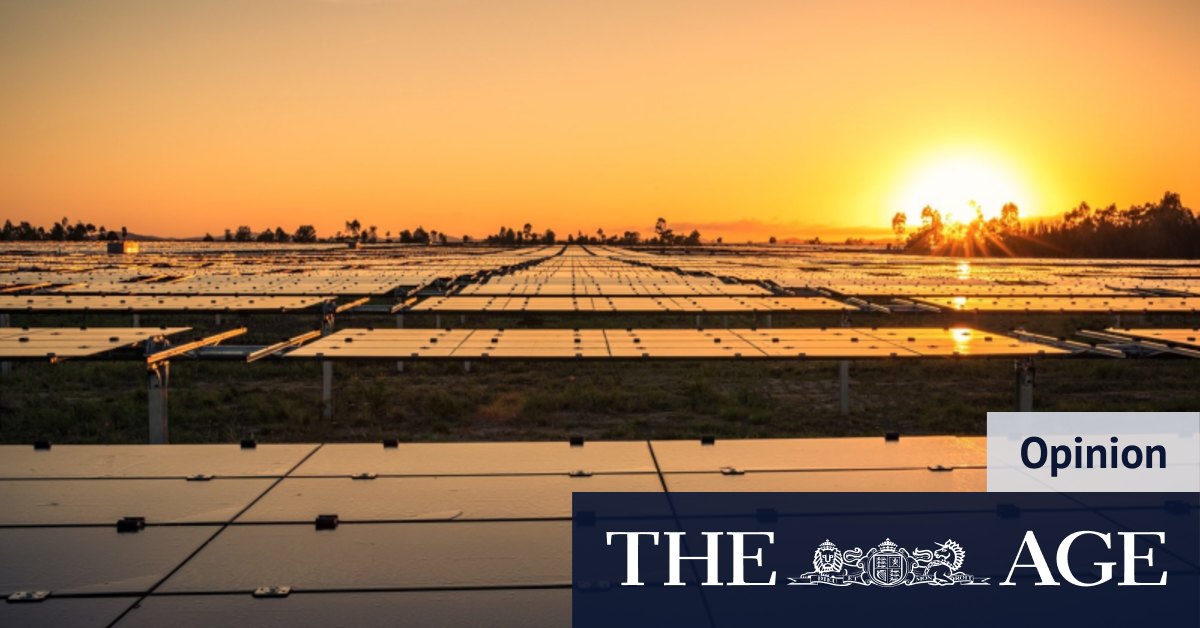 More astounding still is that this 6.5GW/year, all $8 billion of it, is entirely private investment – made up of massive solar farms, massive wind farms and millions of individual rooftops, in roughly equal measure.

This extraordinary transformation is manifesting within a coal-dominated economy, under a federal government that is still addicted to fossil fuels and persists in flogging gas as the next big thing. As Blakers notes, “a gas-led recovery is moonshine”. It’s simply too expensive. And it seems we, the people, are with him. We are transforming our culture – not through government, but despite it.

And here the story becomes really interesting. As the proportion of wind and solar in your grid expands to 50 to 100 per cent, storage becomes the essential stabiliser.

When I set up my tiny farm, they quoted me $35,000 for a grid connection – before I even started paying for the power. You could get a lot of solar for that, I figured. A back-up generator too, and still have change. So I did that, and now I know what it’s like to wait until the sun comes up before you can make tea (without fire) or check emails. So yes, I get the storage problem.

I know, too, that every five minutes there’s talk of a new battery that will finally solve it. First it was lithium ion. Then Tesla. Now there’s Gelion’s zinc bromide battery, invented by USyd’s Professor Thomas Maschmeyer. But if it’s grid stability you want, a very big body of water is hard to beat.

Water, held on high, stores electricity as potential energy. When it falls, it releases the energy via hydro. Then, when there’s excess energy, it is pumped back up. The tech is cheap, proven, long-lasting and relatively simple. The energy is reliable and instant. It’s called pumped hydro electric storage (PHES) and it supplies 97 per cent of electricity storage across the world.

Snowy 2.0 is such a scheme. Due for completion in 2025, it will, says Blakers, be “bigger than all the batteries in the world together”. PHES is necessary for us to increase our percentage of renewable energy, but it doesn’t need to be so huge or so destructive of habitat. You don’t even need a river, a mountain or an enormous land area.

About 500GL, or one Sydney Harbour, would provide sufficient storage to take Australia to 100 per cent renewables, harvested gradually over 25 years and divided into 10 or 15 dam-pairs (that is, to enable the fall, one upper reservoir, one lower).

In a remarkable and fascinating project, Blakers and his team have constructed a global atlas of viable PHES sites. Excluding land that is inhabited, forested, protected or otherwise too precious or expensive to use, they identified some 616,000 such sites across the world. Each comprises a dam-pair, upper and lower, and a linking tunnel.

These 616,000 sites are 100 times what we’d need to supply storage for a 100 per cent renewable energy system for the world. Some 3000 are in Australia, but we need only a couple in each state.

Google “PHES global atlas”. Have a play. It’s like Google Earth, only better. Each of the 616,000 dots – rated from red (promising) to yellow (less promising) – zooms in to a damn-pair (light blue for upper, dark blue for lower) and a linking tunnel. And each of those, from Kazakhstan to Wanaka, yields data about height, gradient, concrete volume, rock removal, water volume and generation capacity.

So the capability is there. And the money. According to Blakers, developers are crawling around the country perpetually seeking sites for the $180 billion worth of solar and wind farms that would take us to 100 per cent renewables. A further $20 billion of hydro is needed to enable it. That’s $200 billion and thousands of jobs, eager to flow into rural areas.

Where will they go? Because new high-voltage lines are so difficult to get approval for, they’ll likely locate near existing lines and close to Sydney – around Lithgow, Bathurst, Goulburn. Yet here’s the irony. These are areas dominated by the vehemently coal-spruiking National Party or, in the case of the Hume (Goulburn) electorate, by the Liberal Energy Minister Angus Taylor, who has resisted the big switch to wind and solar for years.

You’d think they’d be falling over themselves for these rivers of gold. But this is the last surprise of all, and the biggest. They’re desperate for investment, in rural areas, and for jobs. But apparently their MPs are keen if, and only if, the jobs in question are filthy. Truly, lions led by donkeys. Or perhaps that’s no surprise at all.

Elizabeth Farrelly is a Sydney-based columnist and author who holds a PhD in architecture and several international writing awards. She is a former editor and Sydney City Councilor. Her books include ‘Glenn Murcutt: Three Houses’, ‘Blubberland; the dangers of happiness’ and ‘Caro Was Here’, crime fiction for children (2014).

Based on data collected at a control location 13 kilometres away, the company estimated discharges …