‘We’re going to win’: Biden claims mandate as he closes in on victory

admin November 7, 2020 World News Comments Off on ‘We’re going to win’: Biden claims mandate as he closes in on victory 75 Views 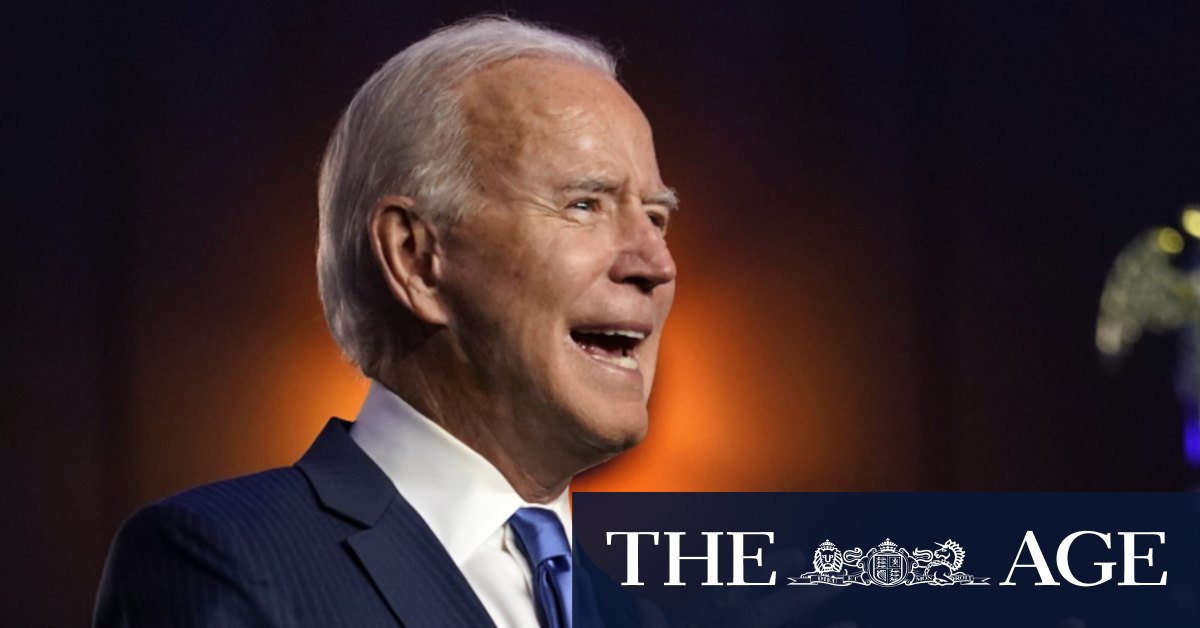 Earlier in the day Trump, who has been sowing doubt about the legitimacy of the election, said on Twitter: “Joe Biden should not wrongfully claim the office of the President. I could make that claim also. Legal proceedings are just now beginning!”

But the President’s hopes of winning a second term, either by overtaking Biden’s vote leads or by challenging the results in court, appeared to be rapidly slipping away.

Trump did not make any public appearances on Saturday (AEDT) and his campaign team’s language was notably softer than it had been in previous days. CNN, however, cited unnamed sources saying staff around the President were concerned he had not yet prepared a concession speech and had indicated to allies that he had ‘‘no intention of conceding’’.

The Biden campaign had hoped to declare victory but several states still remained officially too close to call.

As Democrats grow impatient about the slow release of results, Biden urged his followers to be patient and calm as the final votes are counted.

While acknowledging that partisan tensions are running high after the bitterly-contested election, Biden said Americans eventually needed to come together.

“Strong disagreements are healthy; they are a sign of a vigorous debate of deeply held views,” he said.

Citing the fact that a record 74 million Americans had voted for him, Biden said it was clear that Americans had chosen “change over more of the same”.

“They have given us a mandate for action on COVID and the economy and climate change and systemic racism,” he said.

“They made it clear they want the country to come together – not pull apart.”

He and running mate Kamala Harris were preparing to lead the nation while waiting for the final results.

“I want everyone to know that on day one, we are going to put our plan to control this virus
into action,” he said. “That can’t save any of the lives that have been lost, but it will save a lot of lives in the months ahead.”

He feared that daily coronavirus cases in the US could soon spike to 200,000 a day – double the current figure.

“The pandemic is getting significantly more worrisome all across the country,” he said.

As Biden was speaking, it was revealed that White House chief-of-staff Mark Meadows had contracted COVID-19, the latest member of Trump’s inner circle to test positive.

Two administration officials confirmed the diagnosis but offered no details on when the chief of staff came down with the virus or his condition. A Trump campaign aide also tested positive.

COVID-19 virus has killed more than 236,000 Americans so far this year. Cases in the US have increased more than 50 per cent in the past two weeks. The country reported a record 121,000 new coronavirus cases yesterday. It recorded 107,000 new daily infections on Thursday. Its previous record was 99,000 cases on October 30.

According to an AP analysis of data from Johns Hopkins University, the seven-day rolling average for daily new cases rose from 61,166 on October 22 to 94,625 on November 5.

Meadows travelled with Trump in the run-up to election day and last appeared in public on Wednesday without a mask as Trump falsely declared victory in the vote count. He had been one of the close aides around Trump when the President came down with the virus more than a month ago, but was tested daily and maintained his regular work schedule.

Biden now leads by approximately 30,000 votes in Pennsylvania and 4000 votes in Georgia after previously trailing in those states. With almost all the votes counted in Georgia and less than one tenth of a percentage point separating the candidates, the state appears to be headed for a recount.

After falling behind in Pennsylvania and Georgia, Trump’s complaints about the election process were softer than the previous day when he made baseless claims that Democrats were trying to steal the election.

“This is about the integrity of our entire election process,” the Trump campaign said in a statement.

“From the beginning we have said that all legal ballots must be counted and all illegal ballots should not be counted, yet we have met resistance to this basic principle by Democrats at every turn.”

The campaign’s attempts to challenge the legality of ballot-counting in Michigan and Georgia were quickly thrown out in those states.

Senior Republicans were also growing more emboldened to push back on the President’s claims of rampant fraud.

“Doing so damages the cause of freedom here and around the world, weakens the institutions that lie at the foundations of the republic, and recklessly inflames destructive and dangerous passions,” he said in a statement.

“If the President’s legal team has real evidence, they need to present it immediately to both the public and the courts.”