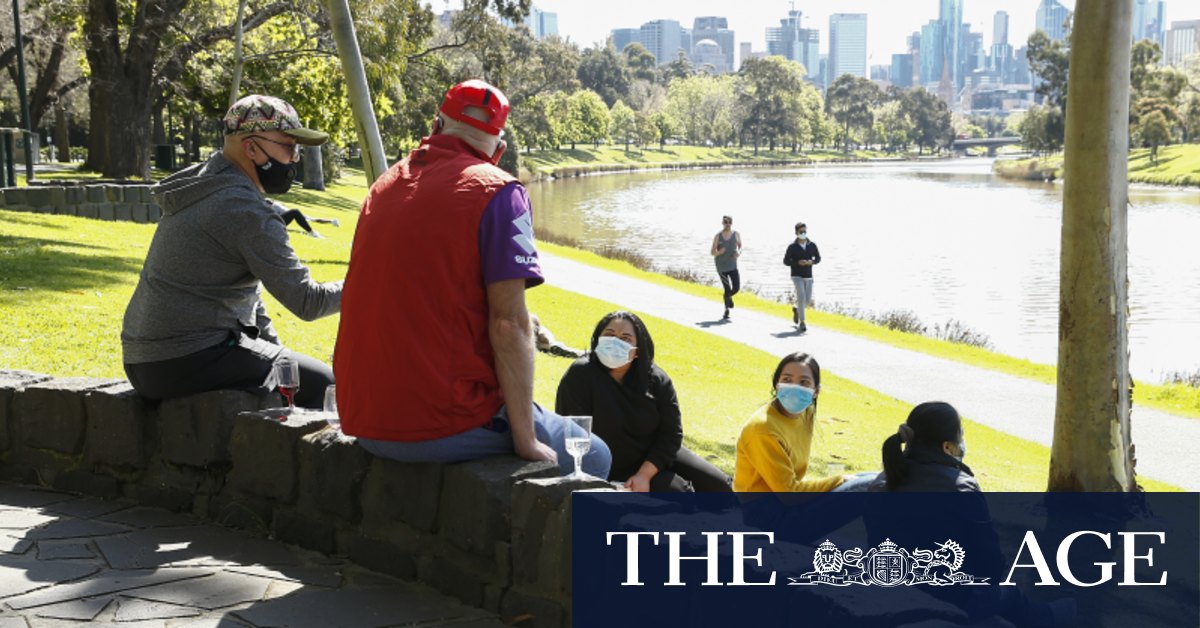 Overnight accommodation will reopen with limits on those who can stay. Cinemas, galleries, museums, and music halls can open with a limit of 20 people per space.

From November 22, Melburnians will be allowed private gatherings of up to 10 people, hospitality venues will be able to have 100 people indoors and 200 people outside. Cinemas, gyms and galleries will also be allowed to have more people inside.

Mr Andrews said “today is a day to be optimistic” as the state continues to drive coronavirus numbers down.

“Today is a day to be proud as Victorians of what we have been able to achieve,” he said.

“There has been a lot of pain and hurt and there is a need for healing, for investment, for all sorts of repair. The most important thing of all that all of us has to do is to stay the course on this, to be as stubborn as the virus.”

He said the easing of restrictions represented a safe pathway out of lockdown.

“It cannot be done open slather, because while the numbers are good, what we have all built together is fragile and precious. And it has to be safeguarded and that’s exactly what these decisions do,” Mr Andrews said.

Victorian Opposition Leader Michael O’Brien said Mr Andrews did not go far enough and urged for “common sense” rules, particularly around the use of masks.

“We’re starting to see a lot of people not following the rules, and we don’t want to see that, but we want the rules to reflect common sense,” Mr O’Brien said.

“We want the rules to reflect what gives us the best public health outcomes.”

Mr Andrews also announced that the government was dismantling the crisis committee of cabinet that had overseen the emergency response to the pandemic.

There are two cases in the state with an unknown source and Victoria’s 14-day average for new cases is now 0.4.

Two people in Victoria remain in hospital with COVID-19, but neither is in intensive care. There were 16,865 tests completed on Saturday.

There have been just two mystery cases across the two weeks up to November 5.

Victoria’s Chief Health Officer Brett Sutton said it was “possible” the state was at the point of eradication of the virus.

“It is possible but I think we shouldn’t work on that assumption because that would change the way we behave and the way we’re going about testing and the testing is a really critical element at the moment,” he said.

Professor Sutton also said masks should remain in place for now across the state, as Victoria is not in a place where “there are no close contacts who may develop an illness”.

“We have still got active cases and that will change over the next couple of weeks,” he said.

“They are useful because they reduce transmissions from anyone who might have an infection. And we don’t know the actual caseload out there.”

Mr Andrews said he wanted to note “how impressive it is that Victorians have built something that is not only unique in our country, but is of international significance”.

“To have gone from more than 700 cases a day to nine days of zero cases in a row is a particularly impressive thing and something every single Victorian should be proud of,” he told reporters.

“We’ve all done this by playing our part and will only maintain the low numbers, not necessarily zero, but numbers that are low and manageable if we play our part.

“Whether it’s wearing a mask, washing hands, coughing into the crook of our arm, following the rules, as difficult and frustrating as they may be, that is what has got us to be able to be open. The rules are about staying open and safe,” he said.

The Victorian Chamber of Commerce and Industry has largely welcomed the latest easing of restrictions in the state but called for more clarity on when office workers might return to downtown Melbourne.

“The winners today are the visitor economy, hospitality, gyms and entertainment, but there is still more work to be done on a plan for the return of functions and events, as well as office workers,” said VCCI chief executive Paul Guerra.

“Victoria needs a road map for the safe return of office workers to revitalise the CBD, with many businesses struggling to make ends meet without their pre-COVID-19 customer base. The plan could include roster systems and staggered start and finish times for example. We should commence transitioning workers back to the office from November 30 as a starting point.”

Australian Industry Group Victorian head Tim Piper said the removal of workforce restrictions for manufacturers was positive and called for other states to open their borders to Victorians.

“Workforce number caps have been removed for manufacturers so that businesses can return to more normal arrangements and ramp up production in the lead-up to Christmas. The easing is most relevant for abattoirs and meat processing plants, poultry and seafood processing,” said Mr Piper.

“Other states should now re-open their borders to Victoria as the state has achieved nine consecutive days of zero cases in what is a remarkable turnaround.”

Mr O’Brien said Victorians were paying a high price for the government’s failures on hotel quarantine and contact tracing that had respectively started and fuelled the second wave of the coronavirus pandemic.

“My position was always the targets were unnecessarily stringent because you can get to a level of suppression without elimination and stay open, as New South Wales has done,” Mr O’Brien said.

“The point is these things come at a cost, and you’re not being fair and honest with the public if you don’t admit these restrictions come at a huge cost. So my question has always been: is the balance right?”

Mathew Dunckley is digital editor at The Age. Based in our Melbourne newsroom, he was previously business editor for The Sydney Morning Herald and The Age and Melbourne bureau chief for the Australian Financial Review.

Previous Pohl position: fund manager bets on Seek in race against short sellers
Next ‘Just to get out will be terrific’: Melburnians busting for the beach